You are reading
Written Review – Smash Up: Monster Smash 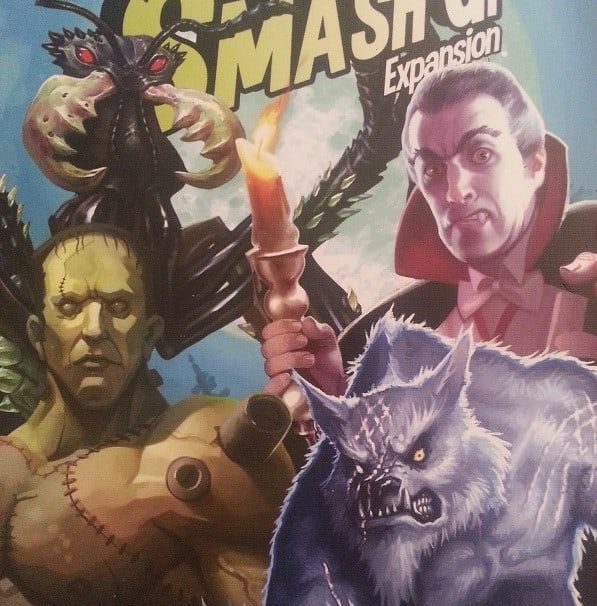 Jumping off of the +1 power mechanic we saw planted throughout Science Fiction Double Feature, Monster Smash brings this mechanic in full swing. All of the things you ought to fear – Vampires, Werewolves, Mad Scientists, and Giant Ants – are all here for the party. And customary to this game, their intent in to destroy and climb to the top. Is this set worthy of joining the other factions in your Smash Up collection? Let’s take a look.

Smash Up : Monster Smash comes in a box sized just like the other expansions and includes:

This review is purely to examine the mechanics of this expansion and does not include a how-to-play section. Please read how to play Smash Up in our review of the base game!

The key mechanic you’ll find in Monster Smash is the use of +1 power tokens. these tokens are added to your minions in a variety of ways (depending on the faction) and can make a seemingly average faction turn into a larger than life, truly fearful foe to go up against.

First faction we’ll take a look at are the Werewolves. These guys are powerful, especially when combined with each other to take down one base at a time. They don’t have a ton of tricks up their sleeves, but their sheer brutality makes them a force to be reckoned with. A lot of their actions and abilities include piling on plenty of tasty +1 power tokens and destroying other minions at their location. Werewolves would be great with other big smash-y factions like Dinosaurs and Bear Calvary, but would also do well with a more trick-y faction like Wizards or Tricksters.

Next up, we’ll talk about the Vampires. Vampires have a lot of do X, get X abilities. For example, you can destroy minions to gain power tokens, add power tokens to those that don’t have them, and more. The Vamps have a lot of swoop in and take the win tactics, and they’ll sacrifice plenty of their own if it means making a slightly more powerful minion even bigger. The Vampires would certainly do well with factions like Zombies, Ninjas, and Ghosts.

Crawling out of the box next are the Giant Ants. Most of these Minions don’t have high power values, but if you let them to their own devices, you’ll find out why they’re called Giant Ants. Most cards in this faction’s deck add +1 power tokens to your minions in some way or another. They can use these tokens to make themselves indestructible, transfer tokens to other minions, and more. This is a faction to pay close attention to. Ants would make a great ally to Bear Calvary Aliens, Plants, or Innsmouth.

Lastly, the Mad Scientists. The Mad Scientists also have a lot of +1 power token additions and distribution, but their power comes in removing tokens for added abilities. Destroy minions? Check. Draw cards equal to the number of power tokens removed? Check. They are incredibly versatile and would be dangerous when paired with another big faction such as Plants or Robots.

The bases have a lot of abilities such as adding +1 power tokens, making minions with power tokens indestructible, and more. These bases are fully functional, and even dangerous, with factions from other expansions or the core set. 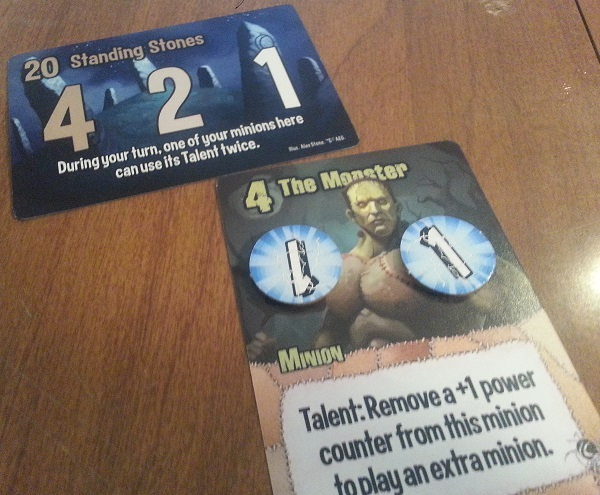 Creatures Of The Night Make For Better Smashing?

If you are looking for something new for your Smash Up games and the idea of some chaos doesn’t scare you, then this set needs to be in your life. The use of +1 power tokens as abilities by some of the factions make for a lot more to pay attention to, but can be incredibly fun to see how big your minions can get.

My favorite faction from this set, hands down, is the Mad Scientists. Not only is the art for this faction awesome, but what else would you want in a Smash Up faction…seriously? They make guys bigger, allow you to reduce them a bit to unleash other crazy things on them, and more. Minions are expendable and only for furthering the findings of these crazed doctors. Mwaha..hahahaha!

The faction that made the most “meh” impression on me was the Vampires. Maybe it was the factions they got paired up with, but I didn’t find them as powerful as I’d hoped they’d be. They are a faction that I hope doesn’t come up frequently in my hand, as there are others that handle the game so much better.

I really enjoyed the Giant Ants because of their potential to get, well, GIANT! I had enormous minions that were indestructible and would overtake a base in just a few turns. I think they’d do well with just about any faction, just for the sheer amount of power they bring to the table. 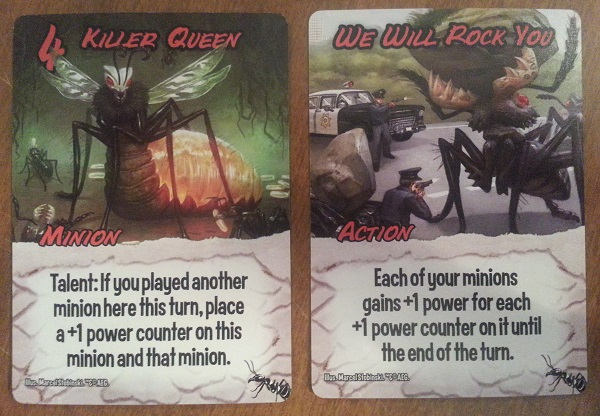 The Werewolves have a lot of “until end of turn” abilities, which means that they can easily take down a base with very few minions, and we think that is pretty awesome. 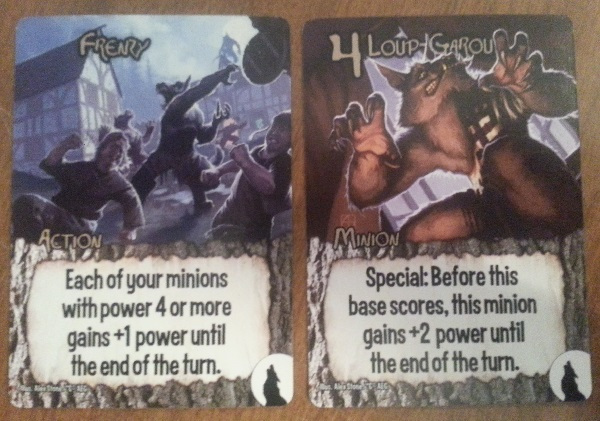 Overall, I think that Monster Smash brings four very unique factions to the game with the +1 power mechanic in tow. They all use these tokens differently enough that it doesn’t get old or repetitive between the factions. As I said above, the only faction I wish worked differently are the Vampires. I was hoping for some ability to reduce the power of another minion by X and add that power to their own minion until end of turn. You know…weakening the opponent. 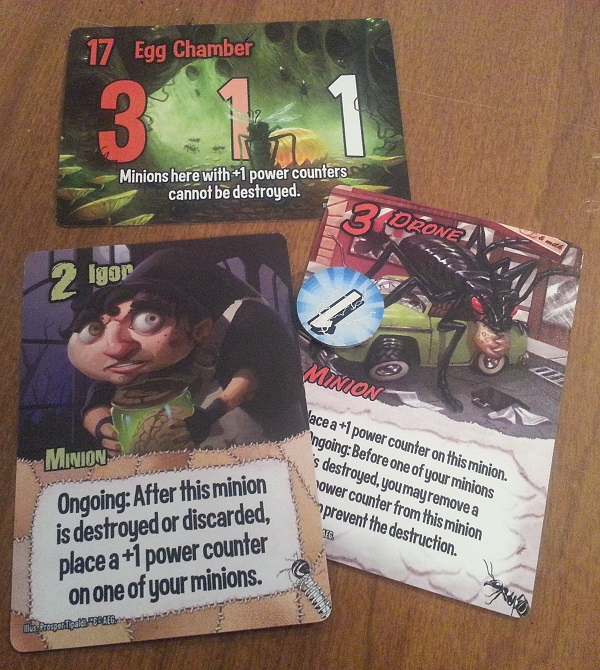 With the (almost excessive if all 4 factions are involved in a game) amount of power tokens flying around, you’ve certainly got a use for all of those VP tokens, also being referenced to now as power tokens, that you have from your previous expansions. While you got to use these a bit in Science Fiction Double Feature, they’re used in full force with this set. 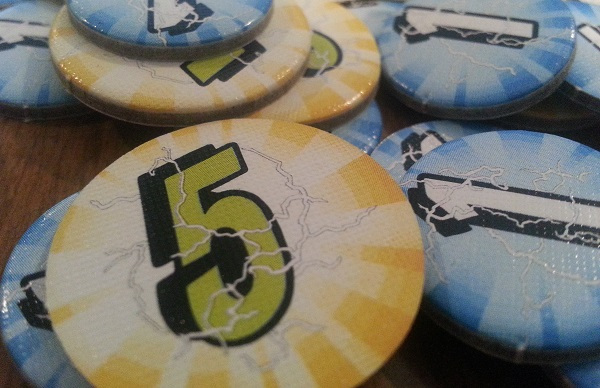 Still, I think that Monster Smash is a good expansion to the base game, and Smash Up players will like this set for the new mechanic especially. Personally, I’d rank this as expansion #2 behind Awesome Level 9000. Smash Up : Monster Smash retails for $19.99 MSRP and wants to bring all the power to your table. Shop online or at your FLGS!