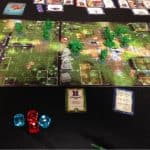 I saw the first Super Dungeon Explore at Gencon and decided to pre-order it.  It definitely had that 80’s video game feel and the miniatures looked odd but super cool. Once the game arrived, the miniatures needed to be assembled with super glue which I admit was not the norm with board games at that time (there are a lot of hybrid board/miniature games out there now).  Thankfully I have been playing miniature games for a while and the thought of having to put models together before use didn’t bother me.  Once assembled, I played a couple of times and it was okay, but nothing that really grabbed my attention.  When the multiple expansions came out I picked up a couple, but did not feel like I played the game enough to warrant getting all the monsters/heroes in the game.

When the second full game came to Kickstarter in March, 2014 I wasn’t going to back it.  Since the game had mixed reviews with my game group along with my lackluster opinion of it, I was truly considering getting rid of it.  As the Kickstarter campaign continued and the new edition has updated rules along with a way to play completely cooperative, I started to watch the progress.  When the game would come with the cards from the previous expansion as well as plans for character advancement through campaigns I was hooked.  I didn’t get everything for the game (there was a lot of content by the end of it), but I got all the Kickstarter exclusives and a couple of the extra heroes.

The new updated rules make the game streamlined, but it still a pretty long game. I hope that with multiple plays and additional players (we played with 2 players and three heroes) that the game time will be much shorter. The rule changes were really nice and made for a fun experience and I can’t wait to get this one back to the table.  I am still in the process of reorganizing all the stuff I own to make it easier for transport. Once that is complete, I should really think about getting rid of the first edition stuff – I am never going back to those rules.

I have yet to play the cooperative version so I will hold my complete opinion of the game until I get a play of that version.

A friend of mine has an outdoor scrabble board complete with 6 square inch wooden tiles.  Three games were played and it was a whole lot of fun.  It’s so weird when you play that with four players/teams that the game feels super-fast! Of course, that due to the fact that on average, you will get between 5 and 7 words before the game ends.  Also not having the ability to ensure a word is legal makes it really hard (something that you don’t have to deal with when playing this on a computer). 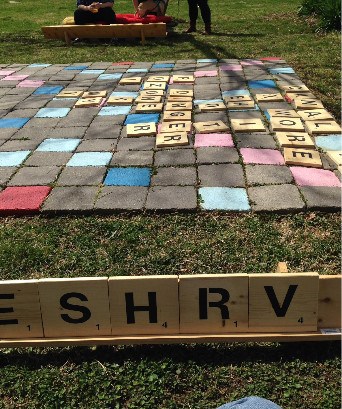 Scrabble: outdoor edition – A good mix of high point letters if one can find a place to play them.

My friend had the 2nd Flick Madness Subbuteo tournament.  I had a whole lot of fun even if I didn’t win a single game.  I must admit that this tournament snuck up on me and I barely got any practice before it.  It is completely my fault since I have a pitch in my basement that is set up all the time.  My friend also has a pitch set up all the time in his basement. The next tournament is in June and if I am able to attend, I should start practicing now! 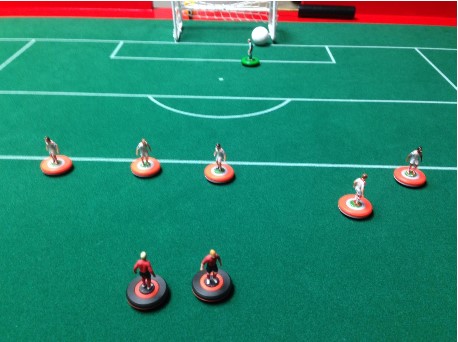 Subbuteo – The goalie is out and all is needed is a little tap of the ball over the goal line for the score.

The Kickstarter for Ninja All-Stars just completed and probably against my better judgment I went ahead and backed it.  The game itself looks pretty entertaining and the ability to cross over with Super Dungeon Explore was too good to pass up. With that one, I will probably be out of the large Kickstarter games for the rest of the year. Unless, some money magically appears in the gaming budget.