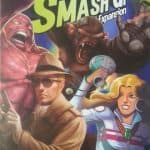 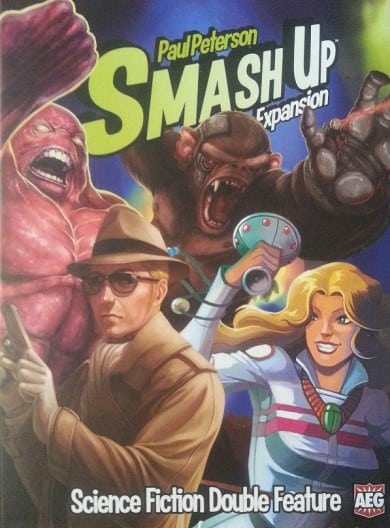 If you’ve ever felt that Smash Up was missing that classic sci-fi feel, then look no further. Slimey shapeshifters are taking over. Spies are infiltrating the game, and decks. Time travelers are messing with the deck-base continuum. And angry enhanced apes are making a complete mess of things. These four factions come together to bring more chaos and control to your Smash Up games. If you’re wondering how this set could add to your experiences, then read on to see the strengths of each new faction. 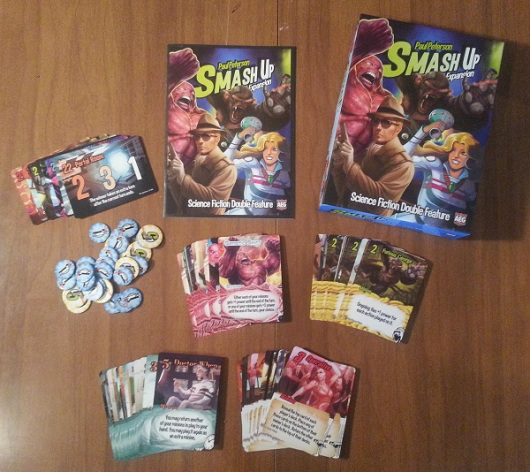 This review is purely to examine the mechanics of this expansion and does not include a how-to-play section. Please read how to play Smash Up in our review of the base game!

The factions of Science Fiction Double Feature fit the classic sci-fi movie themes, but with crazy new mechanics for your Smash Up games. Overall mechanic of these four new factions is deck/board manipulation. Everything from using your discard pile as your hand, cycling through the cards in your draw pile and more. Now, for a closer look at each faction.

The first faction we will discuss are the Time Travelers. These guys have lots of fun tricks, but mostly have to do with manipulating how often cards hit the table. There are a lot of chances to return minions from play to your hand and play them again, return minions to your hand once a base scores, and more. A lot of actions include shuffling cards from your discard deck back into your draw deck, or putting the card at the bottom of your draw pile once it has been played. They also do a lot of messing around with bases themselves such as preventing them from scoring. Fun combinations with Time Travelers would be Wizards or Tricksters.

Next up are the Cyborg Apes. These guys let you keep minions on the board even after bases score, use actions from your discard pile, and pack on the pain. Cyborg Apes are absolutely an aggressive faction. While not all of these monkeys are big, they can get big quickly with the introduction of +1 power text. Cyborg Apes allow you to quickly wipe out the progress of other players such as destroying minions, removing actions played on a base, and more. These enhanced monkeys would pair well with Dinosaurs, Plants, Zombies, or any other faction that get big quickly.

Super Spies, calling in! This sly faction is all about deck manipulation – both yours and your opponents’. The spies will reveal cards from draw decks and cause them to be discarded, or added to the bottom of the draw deck. They can let you look at cards on your draw pile, and place them in any order on top or bottom of your draw deck. Setting yourself up for great combos is what the Super Spies is all about, as well as getting rid of your opponents good draws that would be coming up in future turns. The Super Spies would pair really well with Robots, Innsmouth, Wizards, or Ninjas – factions that heavily depend on combo plays.

And the last faction we’ll look at in this set are the Shapeshifters. These slimey guys share the use of +X power that the Cyborg Apes use. However, the Shapeshifters have very few independent powers outside of stealing the appearance and powers of other minions. For example, Mimic shares a Power value with the highest Power value of any minion in play. This means if you’ve dropped a massive Elder Thing, Mimic is right along with it. Other cards, both actions and minions, allow them to use the same abilities as another minion in play. They maintain a board presence as well by allowing you to play another minion once they leave the field. Shapeshifters work well with big factions such as Dinosaurs, Bear Calvary, and Elder Things. But remember, with their copying ability, they can “work well” with just about any faction, even if it is the ones they’re up against. 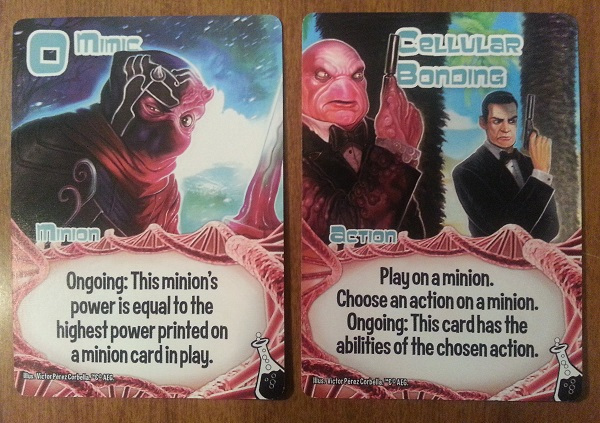 The bases in this expansion will remind you a lot of the factions they are tied to such as replacing the scored base with one from the base discard pile (Time Travelers), search your deck for a minion sharing the name of one you play there (Shapeshifters), adding +1 Power to minions when you add actions (Cyborg Apes), and looking at cards in their draw pile and organizing them as they like (Super Spies).

Enough Manipulation To Make It A Worthy Addition?

This set was an interesting one for sure, as it brought new mechanics in that we hadn’t seen before. Overall, I think this is a great expansion set. My favorite faction? Probably the Cyborg Apes. I even ended up with a Cyborg Apes/Shapeshifter combo and it was just destruction left and right.

As far as the factions that directly use deck manipulation, I felt that Super Spies were the best, as you had the option of putting your cards on top, and you’d obviously draw into these on the current or future turn. Depending on what faction they were paired with, could be a deadly combination to set up your perfect play.

My least favorite faction in this set were the Time Travelers. I wonder if they were running out of ideas for this faction because the 5 Power minion (Doctor When) has essentially the same ability as an action (Do Over!). Most of the deck manipulation with this faction has to do with putting cards at the bottom of your deck. I really do think this faction could’ve done with an action or minion that allowed you to draw from the bottom of the deck to make this a bit more enticing.

As a standalone faction, Cyborg Apes would have to take first place for me from this set. They are big, can build incredible defenses, and quickly take over a base. Being able to keep these minions on the board is a dangerous feat as they are pretty relentless with other minions. I do think that it isn’t just a smash smash faction though. A lot of abilities return cards to your hand or allow you to draw extra, and if you have too many cards, that is a problem too – if you discard the wrong things. Your big power guy lets you play actions from your discard pile, so keep this in mind if you represent this faction. 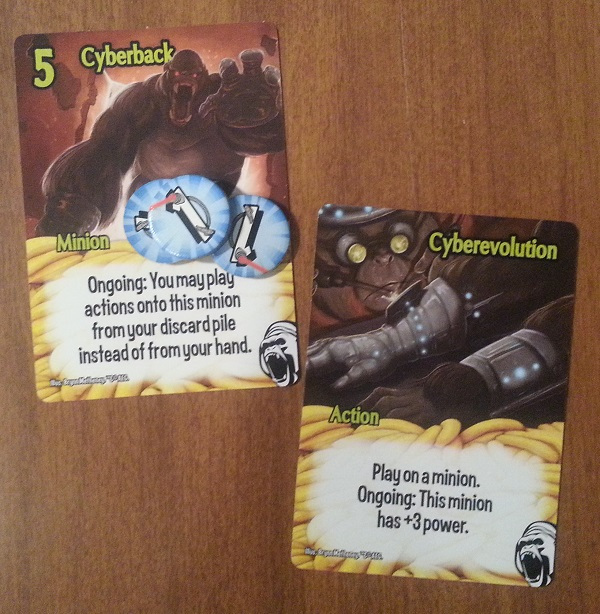 Shapeshifters make an amazing support faction. As I said in the section above, they would pair really well with big factions such as Dinosaurs and Elder Things. Their ability to copy abilities and power of other minions means that if you’re playing opposite of them, you better find a way to keep them off the table. Your minions are just a buffet to copy from, and trust me , they will. 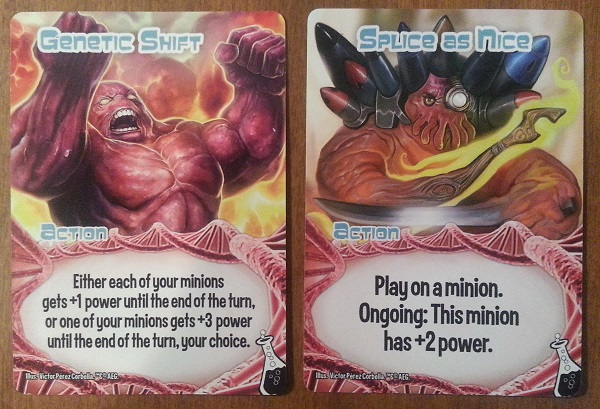 This is a great expansion for Smash Up. I think that while all factions have a strong manipulation mechanic of some sort, they all work independently enough that you truly feel like you’re getting a good spread of strategy amongst the four.  And besides, you now have a use for all of those extra VP tokens that are laying around with each expansion – use them for +1 power tokens! I would strongly suggest any Smash Up fan add this expansion to their collection, even if they only own the base game.

Smash Up: Science Fiction Double Feature retails for $19.99 MSRP and can be found online and in your FLGS!