You’re diligently working in your blacksmith shop when you hear an announcement from town center : the King’s Forge is hiring! Health and dental plans are included, as long as you don’t follow the previous employee’s habit of sharing flatulence related comments. The King has posted 4 items that he desires to have crafted as a display of your prowess before you are hired into the position. Take control of a small forge, build your dice pool, trade for better materials, and craft 4 items before your opponents to claim victory as the new King’s Forge. Let’s look at what you get, and how King’s Forge works.

Upon opening King’s Forge, you will find the following:

Our game also came with 6 mini boxes to store the cards and dice in for an impromptu organization system in the box. We’d like to note that the retail version (and initial Kickstarter version) did not come with a game board, though one was offered through Game Salute for a limited time. However, in the recent Kickstarter for the Apprentices, the game board was available for purchase. If this is something you’re interested in, we’d recommend contacting the designer or Game Salute about their stock. If you manage to get your hands on one of these boards the docks tiles become obsolete.

All players take a Smithy tile and choose which side to use as their mascot, then each player takes 5 metal dice, and the rest of the dice become the stock for the game. The four Dock tiles are placed near the center of the table. Shuffle the Craft cards and draw the following number of cards, depending on the number of players:

Sort these cards from lowest to highest based on the numbers in the upper right corners. The three lowest ranked cards are placed face up next to the docks : these are the current projects that players can attempt to craft. Take a quick look at a Craft card. The left side of the card will tell you the item name with some art. The upper right corner contains a number : this is its rank. Under the rank will be dice of various colors and faces. This is the minimum face and color of the dice you need to roll to successfully craft this item.

To claim this card, the dice you roll must contain 2 green dice showing 2 or more, and one blue die showing 4 or more.

Pull out the North Mine, South Mine, East Forest, and West Forest cards from the Gather deck, and shuffle the remaining. Draw 7 of these, add them to the 4 pulled cards to create the Gather options for your game. These stay face down in a pile next to the docks until the first turn. 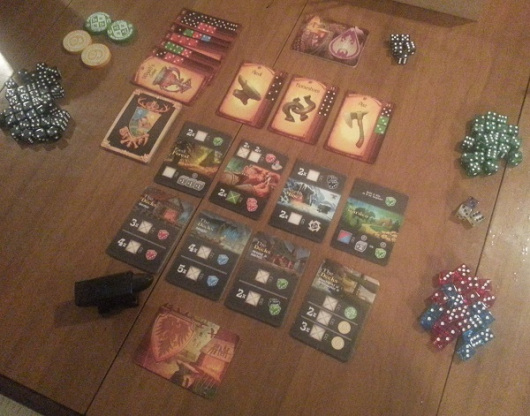 All dice and tokens within reach of all players.

Quick overview of a Gather card: Each Gather card will have a name (in the middle) and two possible actions – one on top, one on bottom. Some cards give you dice, other require that you sacrifice dice in exchange for better dice, enable you to use their benefits at any time, add your new dice directly to your supply to roll at the end of turn, flip a die to its opposite face, reroll dice, or add bonuses to the dice you roll. On all Gather/Dock locations, the box where you place dice will have a color (indicating what dice is required to use the action), though white boxes can be any die. If there is an “X” over the box, this means that these dice will go back to the stock at the end of the turn. 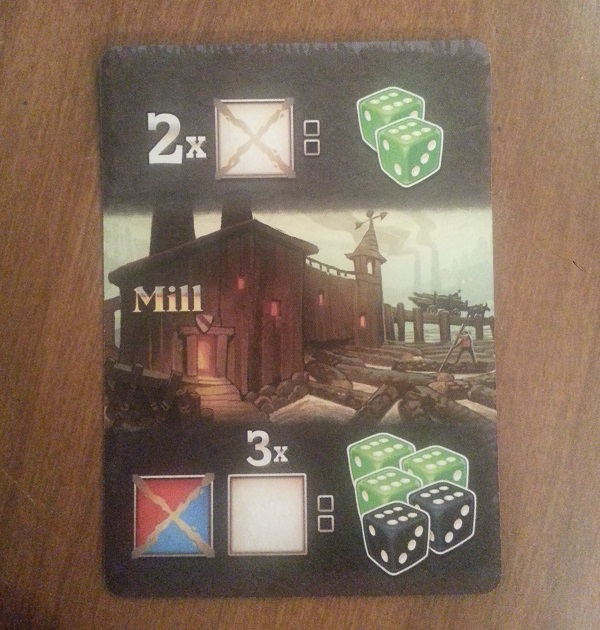 In the Gather phase, the first player draws the top 4 cards from the Gather deck and places them on the table next to the Docks, then takes an action. These actions include claiming a Gather card, Discarding a Gather card to use a Docks action, or passing. As soon as a Gather card is claimed or discarded, it is refilled. The next player follows suit, and this goes on until there are no more Gather cards left or all players pass. Any new dice claimed are moved from the stock to your Smithy tile (any dice on the Smithy tile are not used in the Craft phase this turn). Resources in King’s Forge are finite : if you are to collect 2 Gem dice and only one is available, you only get one. 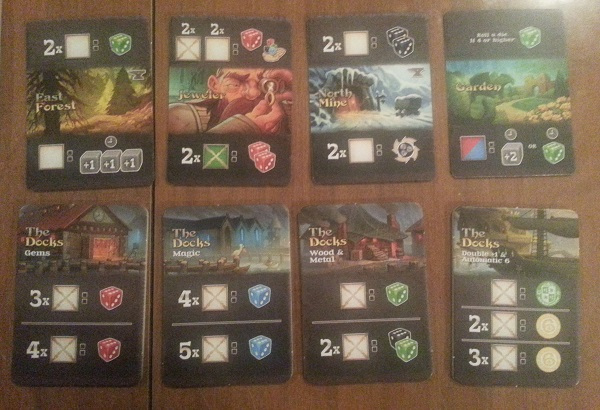 If a player wishes to use a Docks action, they remove one Gather card, place it face down in the front of them, then take one of the Docks actions. Unlike Gather cards, they stay in the center of the table and each action available on these tiles may be used. If you decide to pass, you are done for the Gather phase and cannot jump back in if a better Gather card comes up. The first player to pass gets a green +1/+1 token or one metal die for their supply.

In the Craft phase, beginning with the first player, they roll the dice in their supply (on the table, not on the Smithy tile). This is when players may use dice manipulation benefits gained in the Gather phase to change the outcomes of their rolls. If the dice you roll match the color and minimum facing on the Craft card, you place these dice next to the Craft card and place it in front of you, but you have not yet claimed it. If another player rolls and can exceed the dice facing you’ve produced on at least one die, they can steal the Craft card from you. When a card is moved from these 3 spaces, it is immediately refilled.

In the Clean-up phase, if you are able to be the final claim to a Craft card these are placed under your Smithy tile with the rank numbers visible so players know how many items you have crafted. All dice used are placed on the Smithy tile, and all dice used on Gather/Docks locations are returned to the stock or to that player’s Smithy tile, depending on the action shown on the location. 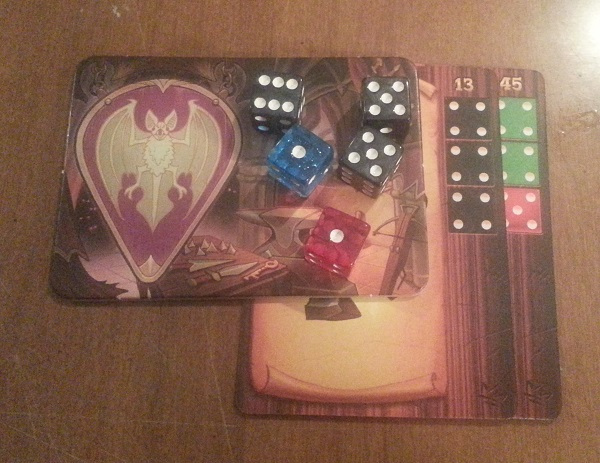 The Anvil passes to the next player who shuffles the 11 Gather cards, and all dice are moved from Smithy tiles to the table for the next round.

The end of the game is triggered when one player has claimed 4 Craft cards! If there is a tie, the player with the Craft card of highest ranking is the winner. In a 2 player game, a player will need 5 Craft cards.

Crafting A Winning Strategy To Become the King’s Forge

We were happy to see King’s Forge show up at our doorstep as it is a difficult game to get your hands on. We were able to procure a King’s Forge Unnecessary but Totally Cool Game Board before our first game, and I’d highly recommend it to anyone who can pick one up as it really added some unity to the game. However, as it is titled, is it unnecessary for gameplay and can be played without it. Also, the 6 boxes included in our game for organization came in handy to keep all those dice under control when the game is not being played. 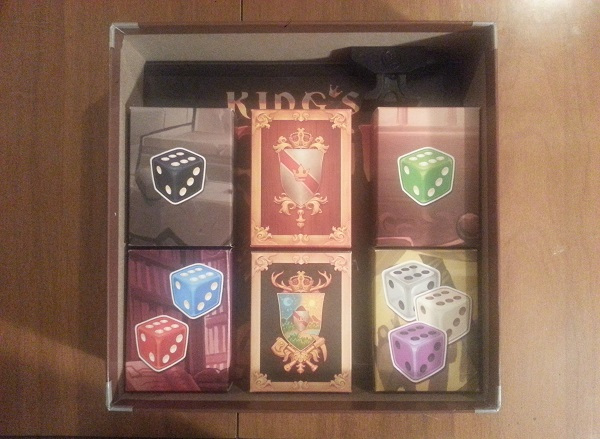 King’s Forge was more difficult than I expected. The decision to sacrifice small dice in the beginning for better dice was always desired, but sometimes the number of dice you’d have to lose could be catastrophic early game. I found it difficult to find a balance between gathering enough metal dice to get better dice while still having a chance at some of the early Craft cards because most of my dice were gone off the bat. Though you can see what cards are coming up next so it is a bit easier to decide what sacrifices will be worth it in the upcoming rounds.

That being said, your decisions are crucial and can always be messed up by other players. Maybe they took the Gather card you wanted. Maybe they took the Gather card you were eying and discarded it to use a Docks action. That will get your iron blazing for sure. I felt that the game was balanced, however, with the element of luck that any dice game will give you. Yes, there are ways to manipulate those rolls via tokens or Gather actions, but a die showing 1 isn’t going to get you very far unless you can reroll it and the Powers-That-Be look upon you in favor.

I think this is a great 2 player game and finds itself at a comfortable 30 minute game with 2. I think the best player count is 3. It throws that extra element of “what-if-I-get-screwed-with” without making it hopeless for the last player to make any headway whatsoever. 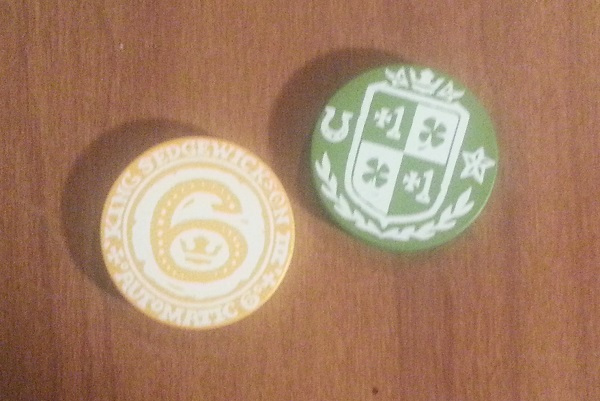 I like the components and the art is bright and just what I would expect in a medieval-esque blacksmithing game. I really like the Anvil token and the quality is high throughout the pieces. I think that King’s Forge has a lot of flexibility and strategy because of the other players and the manipulation power you have in the game. Other players swooping in to steal your craft claims can be really rough when you’re nearing the end-game! 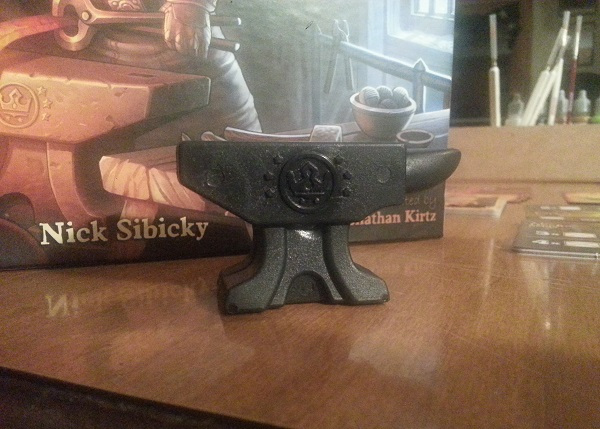 King’s Forge has a lot of replayability due to the fact that save for the 4 initial Gather cards that are used in every game, your options will change game-to-game. If you have infinitely bad luck with dice you can still save yourself in this game with re-roll and +1/+1 abilities in this game, not to mention the Automatic 6 tokens. It is possible to come back from a roll of all 1’s. Trust me, I’ve done it to take a win. It is a very “chance-y” game, so it won’t hit our table more than once a month perhaps, but I think it is a nice dice game to play with gamers who are new to them or to pool management.

While not dwarf-specific, I think that King’s Forge would make a good addition to a dwarf themed game night. If you like dice games, or would like dice games if you could have more control of changing the outcome, I’d recommend giving King’s Forge a shot. It has elements of a worker placement game which is likely to draw in that crowd as well. If you can find a copy of this game, I would suggest trying it out to see if it is a right fit for you! The Kickstarter pledge level to get the game was $39, and I imagine the MSRP would be similar.