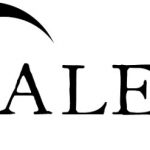 The recently-launched Kickstarter, Salem, is a deception heavy card game that sets to “right the wrongs” of Mafia (also known as Werewolf). Like Mafia, or other popular deception games like The Resistance or Battlestar Galactica, a small number of players try to hide their true allegiances while interfering with the plans of the rest of the players. In the case of Salem the players are separated into the witches or the innocent players. Though with a few twists on the basics of the deception genre, Salem looks to carve its own niche. 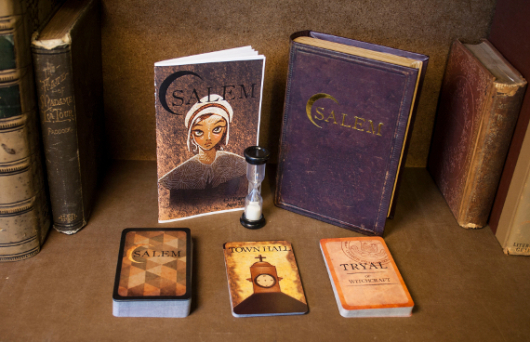 In Salem players are each dealt five “Tryal” cards (complete with old-timey spelling) that tell the player if they’re a witch or an innocent. If you have just one “Witch” card, you’re a witch. The innocent players have to reveal all the “Witch” cards to win the game. If a player has had all five of his “Tryal” cards revealed he dies as well, even if he was an innocent. 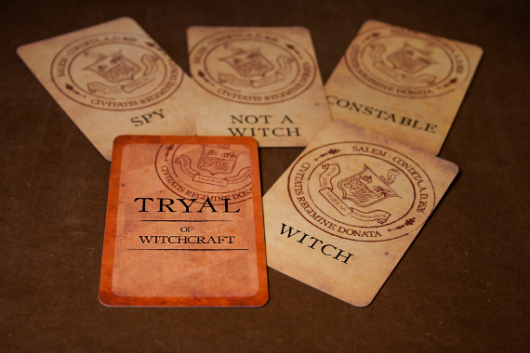 Games like The Resistance only deal out one allegiance card, but Salem deals out five “Tryal” cards instead. The abundance allows the game some interesting game space a lot of deception games don’t have right now. While The Resistance basically never makes a player reveal his allegiance, Salem is a lot less gun shy about it. The five cards can also add a bit more doubt in the player’s mind as well. “People get more chances to be deceptive. It makes it a little easier for the bad guy to lie when they can say ‘look, you’ve flipped over two of my cards and I’m not a witch’ and that adds more doubt back to people’s minds,” said designer of the game, Travis Hancock. 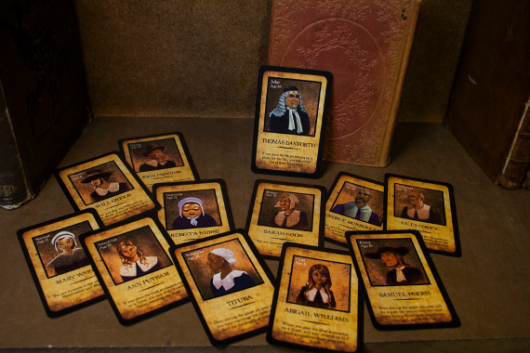 Instead of working through a voting mechanic like Werewolf, Salem sees most of its actions on a more individual level, with the players laying down cards that contribute to the action. In Salem instead of just trying to accuse and convince other players through words, you can take direct action yourself even if not everyone agrees with you. Your cards can help protect players, put them on trial, or other effects. Some cards can add interesting wrinkles, like the Matchmaker cards, which connect two players so that if one dies, the other dies as well. “That can create some fun situations where two people who were going after each other suddenly have to start protecting each other,” said Hancock.

One of Hancock’s favorite parts about the game is the “Conspiracy” cards though. When drawn, the player’s “Tryal” cards get moved around, so the witch cards can spread around. If a player has ever had a witch card he remains a witch though. When a player is killed they have to reveal whether they were a witch as well, even if their card has jumped elsewhere. “It can become a logic game … we’ve killed people just to know if they were ever a witch,” said Hancock. Since the innocent players have to find all the witch cards the game can turn into a sort of shell game in the innocent players trying to determine which player has the card now, he said. 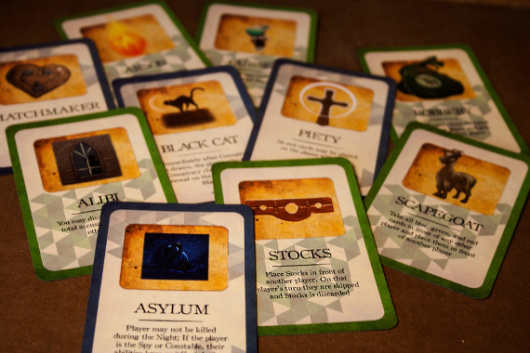 The game can be played with 4 to 12 players. Hancock said he likes it best with 7 players, because that’s the point two witch cards will be among the players. He added the game still works well with less than that though.Salem looks to be dripping with flavor as well. Hancock said he and his wife stumbled upon the idea to make the game box a faux book design, so it looks like you’re opening a book when you open the box, and also found a way to manufacture them. In addition the character cards are based on the real life historical people of Salem and biographers for those people are included in the rulebook. “When we playtest we’ve had a lot of people start speaking in the voice of their character,” said Hancock.

Salem will be Hancock’s first published game and he said he has been playtesting it for three years now. The Kickstarter for Salem ends April 24. A pledge of $25 will get you the game and free shipping.