You are reading
Practice Your Hunting Skills with Nawakwa, the Next Title from Black Locust Games

You may remember Black Locust Games from their Kickstarted title, Regnum Angelica. It was a game that Kae and I fell in love with and we did all we could to help spread the word about its campaign. We even gave away a copy of the game not too long ago, and we continue to support it any way we can. Since that time we’ve become quite close to the team at Black Locust and are happy to announce (and show off) some pretty awesome news.

If you’ve been following the Black Locust blog on BGG, then this announcement may be old news to you. Back in January Black Locust announced that they were working on a brand new game while some things for their second title settled in. This new game would be called Nawakwa, and it would be a much lighter game than both Regnum and The Opulent, the second project from the team. Nawakwa is an old Chippewa Indian term meaning “in the middle of the forest”. The game puts players in the role of Chippewa Indians hunting in preparation for the oncoming winter.

Black Locust made the decision to publish Nawakwa as their second title to prevent a giant absence between releases, and I agree that it was a good decision. Players will now have another title to sink their teeth into while The Opulent is still getting its kinks worked out. Now that the decision has been made, what will Nawakwa bring to the table? To answer that question we need to take a deeper look into just what Nawakwa is and how it plays out. Luckily we’ve got details to help us decipher that very question.

The Spirit Tree – the central piece upon which Nawakwa is centered.

In Nawakwa players will take turns tracking, searching for, and hunting all types of game that would have been found in the forests surrounding the Chippewa grounds. The Spirit Tree, pictured above, dictates the length of the game as well as what sort of game will be found within the surrounding area. The Spirit Tree has colored leaves that will fall as the game goes on, and as these leaves fall, animals of the matching color will either migrate or hibernate. This means they won’t be available to hunt for the duration of the game. 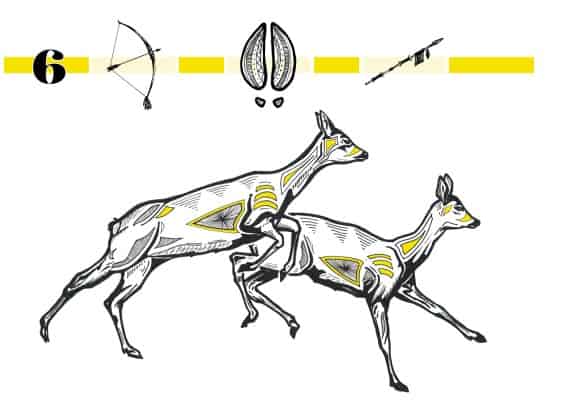 The Deer Tile, showing what sort of items are needed to hunt the animal and how many points it is worth.

Each animal is represented by a tile that’s arranged with the others around the Spirit Tree. The tile shows what sort of Tracking cards a player needs to have in order to obtain a hunting opportunity for the animal. Each tile is also associated with a deck that contains cards that show whether your hunt was successful, if you’re on the right trail, or if you’ve wasted your time and the hunt failed. Players will be dealt cards from the Tracking deck that contains weapons (such as spears and arrows), animal tracks, Spirit Tree cards, Totem cards, and the Blue Wolf card.

On your turn you may take one of the following actions:

As players hunt animals they will become easier to hunt by opponents. After each Hunt action is taken the current player places an arrowhead marker on the animal he/she just hunted. This will make the animal easier to hunt by others as each arrowhead token reduces the number of cards needed to hunt the animal. You see, each time you attempt to hunt and animal you will need to turn in a set of four cards. This can be any combination of weapons and animal tracks you have matching the color of the animal you’re trying to hunt. As the animal obtains arrowhead tokens, however, the number of cards needed to perform a hunt are reduced. For example: one arrowhead means only three cards are needed, two arrowheads mean only two cards are needed, and finally one arrowhead means only one card, either an animal track or weapon, is needed.

Winter effect shards will penalize you at the end of the game. Once all of the leaves have fallen from the Spirit Tree the game ends and the final scoring takes place. Each player will score points equal to the amount shown on their successful hunt cards as well as gain bonuses for additional hunts matching a color group. Here’s where the shards affect you: for each winter shard you have you reduce your score by 20 points. Therefore, not hunting when you can could end up hurting you in the end.

There are some other things you can do in the game as well, such as playing Totem cards and the Blue Wolf card. Through your hunts you’ll pick up Totem cards that allow you to do different things based on their color. The Blue Wolf card allows you to search through the hunt deck of one animal to determine if it has been successfully hunted or not. You see, each animal’s hunt deck only has a certain number of successful hunts. As players take their turns you never really know if an animal has successfully been hunted or not, so you take gambles when going on the hunt.

Nawakwa is shaping up to be an amazing light game that I think will be great for families and game groups alike. It’s nice to see a hunting game that’s got plenty of heart, fun mechanics, and is thick with theme. Black Locust Games is definitely on the right path here, and I think they’re making yet another game that I’ll need to have on my shelf. Casey Willet has announced that the prototypes for the game are in, which means a handful of people will get to put the game to their table and try it out. As more news surfaces on the game we’ll be sure to keep you readers updated. Until then, what do you think of Nawakwa so far?