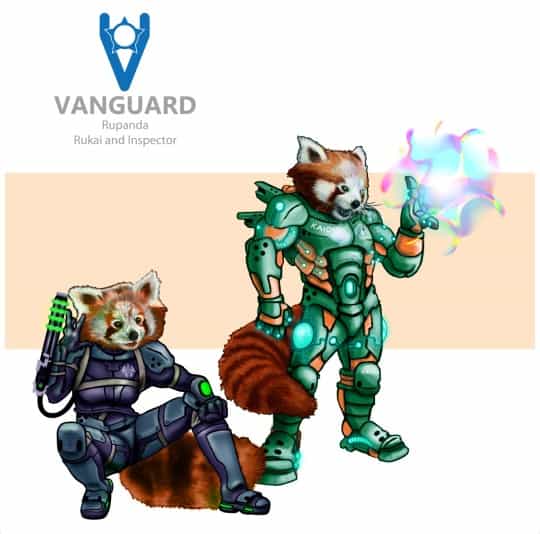 “Sci-fi adventure RPG for all ages: At the beginning of a galactic war, a new breed of adventurers forge their own legends.”

“Vanguard is a sci-fi RPG for young and old gamers alike. The players take on a role of space-faring adventurers at the beginning of a galactic war. It is a story of personal, political and ecological adversity; of friendships tested by social and cultural differences; and heroism against a seemingly unstoppable force.”

Vanguard-Varmisk Fallen produced by Broken Tower Productions has designed Vanguard to appeal to gamers of all ages, but specifically from about the age of 7 and up and all levels of experience. Vanguard may remind you of many different games, because they have pulled their inspirations from  Wind in the Willows, MassEffect, as well as Robotech and Starblazers, Traveller, Mekton, HeavyGear and Cyberpunk2020; StarWars, Battlestar Galactica amongst some others as well.

I know I cannot be the only one that gets excited to hear that the game is intended for all audiences/younger audiences as well as older. I imagine it makes anyone who is Raising a Geekling even a little more excited to know there could be a potential game to play with their little geeklings! 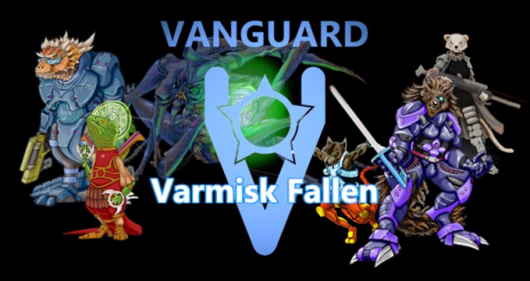 Vanguard can be considered a bit of a space opera. There are rewards for teamwork, but also for taking chances as well. With these choices it adds a depth that can inspire drama and conflict. With some simple mechanics, Vanguard—Varmisk Fallen allows more advances elements to come into play as newer gamers familiarize themselves with concepts of roleplaying. The mechanics get a little taste of mathematics, but they have been kept light with only six-sided dice used and most statistics kept to single digits.

Vanguard—Varmisk Fallen has been in production for a year, which has included some game testing and is currently coming to the final phases. The rules, setting and first two modules are complete, but of course here comes the last jump and that is where they need YOU. This is where they have started their Kickstarter. Now, the Kickstarter is going to be used to pay for professional editing as well as some further artwork to ensure the end result is a high-quality product.

The final product will take form of two books, each book will be approximately 124 pages in length, with the core rule book containing everything needed to play and the expanded rule book providing a more sophisticated playing experience in large format (8”x11”, A4) as well as in full color. The books will be provided in digital format (PDF), as well as available in premium print soft and hard-cover formats.

The characters that are created by the players already have established lives, friends, jobs, homes, as well as plans. Their Varmint species of the Confederation are made up of Badgerians, Hoppolites, Mausers, Molen and Nutwerks. They are attacked by an alien race: the Tanarii. 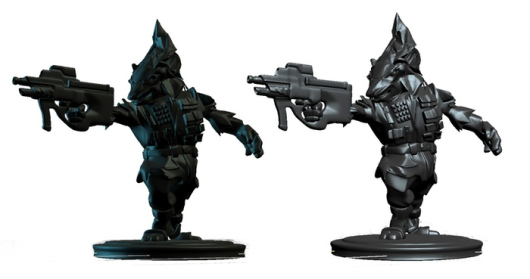 So, Vanguard—Varmisk Fallen in their KickStarter are trying to raise $5,500 to finalize their game, as mentioned above get some professional editing as well as perfecting the art. But as with all Kickstarters, they have their stretch goals. The first one is if they hit $6,500 they would be able to do some unique miniatures as well. As we’ve been able to guess so far, Vanguard has many unique characters that would be really cool to have 3D versions of to play with during the gameplay. They’ve even decided to use a white metal over plastic or resin because they will be able to create a much higher volume of miniatures that can be produced. It not only lowers the cost, but it keeps the quality high.