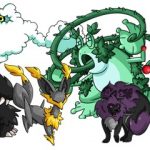 Growing up, I remember having my face buried in my Gameboy most of the time. I seriously loved this thing. I lugged it with me everywhere I went – school, to the grocery store, friend’s houses, to the park – there was nowhere I went that my Gameboy didn’t go. Specifically I remember being hopelessly addicted to Pokemon. Now I really dug the first few games – I played up until right after Silver and Gold released – though I didn’t go much further past that.

As I got older I put the Gameboy down in favor of some good old tabletop RPG games. I would go over to a friend’s house every other week to enjoy some great storytelling and attend an adventure with all my friends. I loved the storytelling aspect of the game that allowed me to get deeper than Pokemon of my younger days, though the companionship I felt with my Pokemon was lost in a world of sword-fighting and spell-slinging.

The team at Late Knight Games spoke to my heart when they released their most recent Kickstarter for MajiMonsters – a tabletop RPG that puts you in the role of a binder, someone with a unique talent that can capture monsters in little crystals known as drajules. Now this isn’t some light-hearted world where people live alongside these monsters in unison like in the Pokemon realm. No, in MajiMonsters humans have been pushed to the brink of extinction. In order to stave off their own end some have risen up as binders to capture the power of these monsters and turn it on their own. MajiMonster is the name given to a monster that’s been infused with the ancient power of old – maji. Binders can harness the power of these MajiMonsters and use it to protect the world as they know it.

I really appreciate the work put in by Late Knight in an effort to create a game that throws a whole new perspective on an older game that I love, all while creating something entirely new that a younger generation of the present can enjoy. The game’s Kickstarter campaign successfully funded with about $2500 more than the company asked for their goal. There will be a hardcover rulebook printed for the game, along with 10 new monsters added to the already thick roster.

I got a chance to get some demo documents from the team and we put them to use here at the I:T office. With the documents we were able to run some simulated battles using pregenerated binders set up with their own MajiMonsters. The demo documents that Late Knight sent to us highlighted exactly what we needed to know: turn actions, combat, and a little bit about how game mechanics work. There wasn’t a lot to go on to set up any sort of small adventure, though it was plenty to roll out handfuls of battles with different binders and MajiMonsters.

For the demo we set up I took the role of Handsome Jon with his Amphiboil:

Kae took the role of Nadia, the Alchemist and her Gravecloak:

The demo documents laid out all of the stats and mechanics quite well. If you have any experience with Pokemon at all then this should come as no surprise to you. Each binder has a set number of MajiMonsters that are bound to the drajules they carry. They can call upon these monsters to battle with against other binders and their own monsters. Each MajiMonster has a string of stats as well as a set list of attacks. Adding to this, each MajiMonster embodies a certain number of affinities, which are like elements. Some affinities are stronger against others, while some are weaker.

The documents laid out how combat works, which was the main takeaway from what the demo setup had to offer. During your turn you can perform any or all of these actions in any order:

Once you have taken any or all of these actions your monster’s turn is over. Before the end of the turn you check to see if you can end any conditions your monster is suffering from, whether it be poison, burned, etc. Then your opponent takes their turn, and combat continues until all of one player’s monsters are knocked out!

Attacking in MajiMonsters is something you’ll do a lot. The good thing is that the combat system is relatively easy to understand and use. To make an attack you’ll roll dice to see if you hit your opponent. Again, this is a tabletop RPG after all so the genre elements carry over seamlessly into this amazing game. When it comes to attacks you usually have two different types: magic or strike. Magic attacks are things like a fireball or energy beam and they target your enemy’s Discipline. Strike attacks are things like a slap, kick, or tackle and usually target the defender’s Protection. To make an attack roll you roll 2d6 and add the stat associated with the attack, whether it be Strike or Magic. Your goal is to meet or exceed your opponent’s designated stat, being Protection or Discipline. As long as you hit you do damage based on the description of the attack.

Let’s take a look at an example. I went first (to start combat you roll 2d6 and add your Speed stat, whoever gets highest goes first), and my first attack was Fire Breath. I rolled 2d6 and added my Magic stat to the roll. I got an 11, which was higher than my opponent Gravecloak’s Discipline (9). I scored a hit, and it came time for me to roll damage. The Fire Breath attack states that I roll 2d4 and add my Talent score to the roll. I rolled a 7 and added my Talent of 3, making my overall damage roll a 10. However, my Amphiboil shares an affinity with the type the attack uses, so I automatically add damage to the attack equal to double my monster’s grade, which was 1. So, total my attack dealt 12 damage to my opponent.

Here is an example of how your MajiMonster’s stats are laid out. You can see here the attack highlighted in red.

For the demo we didn’t use a map, so I didn’t need to move my monster. I made my attack, and I didn’t have any binder actions I wanted to take. My turn ended and I passed over to Kae so she could retaliate. Combat continued like this, our monsters taking shots at each other, until one of us was knocked out. Unlike Pokemon your monsters don’t have a set number of times they can use a specific attack, so you can keep bombarding with whatever attacks you like. In bigger battles, however, you need to keep track of the attack’s range and area. Some attacks are cones, others are lines, and you also have melee attacks that target adjacent areas.

We had a heated battle, and though Amphiboil came in swinging, Kae and her Gravecloak sealed my fate in the end. You see, each monster has a number of Grit points that they can use to Empower their abilities. You can Empower things such as attack rolls, damage rolls, and even some checks (used by the GM for certain situations). Knowing about this little technique, Kae unleashed a barrage on me that I didn’t expect at all. Her Gravecloak used an ability called Maji Bolt that packs quite a punch. Using a point of Grit, Gravecloak can fire a bolt of energy as many times equal to her Talent score, and each shot can target a different monster. What’s more is that the monster can use Grit to Empower the damage or attack roll of each shot, provided they have the Grit to do so.

I was not prepared. Gravecloak fired three shots, equal to her Talent score, and they all blindsided my Amphiboil. Using Grit she Empowered each damage roll, which added an extra 1d6 to the damage she dealt with the Maji Bolt. Before I knew it I took something like 26 damage in one turn, and my poor little heart sank. In the moment I felt the panic and desperation I had felt back in my younger years when my Pikachu fainted. Without knowing it I created a bond between myself and my Amphiboil that I didn’t realize until that last second.

That’s what is going to make this game unlike any other RPG out right now.

MajiMonsters allows me to live my younger days in a new format, all while throwing in an adult spin on the world. We continued to battle until we were tired, and it was an amazing experience. If you haven’t gotten to check out the game yet I strongly urge you to. The team at Late Knight is putting together some awesome stuff, and it won’t be long until we see the game reach fruition completely. I am intrigued to see more monsters, as well as how the adventure system is going to be set up. I really think MajiMonsters has potential, and I look forward to seeing where it goes.

Honestly, though, I just wanna beat on stuff with a Stalagmaul.