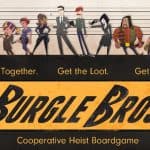 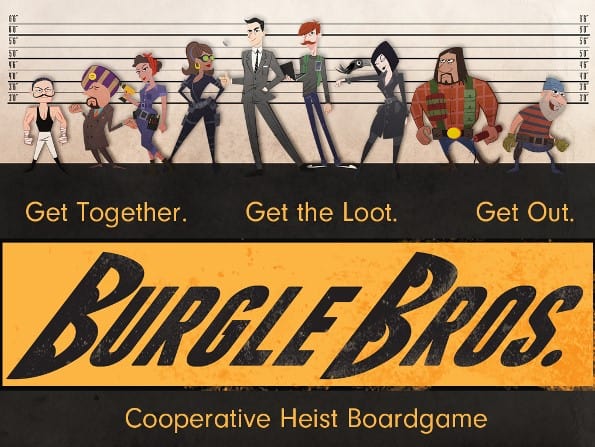 Thieves have a certain charm when they’re ambitious and going for that one big heist, like say the charismatic crews from films like Ocean’s 11 or The Italian Job. Recently launched Kickstarter game Burgle Bros. hopes to recreate the feeling from those movies, and in the game you and your friends will work together to pull off the crime. “My goal was to make a heist game that feels like you’re really on a heist,” said designer Tim Fowers.

In Burgle Bros., a co-operative heist board game, players work to crack three safes on three different floors of a building. They have to avoid the roaming guards though, because if the guards are in the same room as the player they will lose one of their stealth tokens. Once a player is out of stealth tokens and is in the same room as a guard the thieves will be caught and the game will be over.

Players have to navigate the rooms, which are divided by walls and filled with traps like laser tripwires and motion detectors. In addition to all the classic traps, the game also throws in a lot of the well-known and cool tropes from heist movies, like the E.M.P or the smokebomb, which are tools that can be used by players. “We found places for those in the game rules where they’re functional in the game, they’re not just flavor text,” said Fowers.

The rooms are laid face down in the three floors of the building, mostly randomly (each floor is guaranteed to have a safe and a stairway), which gives a rogue-like feel to the game. The fact that you never know if you’re stepping into a room monitored by a camera or one blocked by a keypad or deadbolt should create tension as you explore the building and reveal each room. Although players can use actions to “peek” into the next room to see what awaits them, they’ll be times when they have to take risks and jump in headfirst, said Fowers.

The game ramps up to a climactic end as the guards begin to move faster and avoiding them becomes more vital to the game. “People are running out of stealth tokens and there’s usually one person who has none left and he’s just trying to book it to the exit,” said Fowers. The event deck also adds an element of chaos that will muck with the player’s plans leading to things falling apart and creating tension. “That’s a part of the heist movie feel too, where everything’s going well, but then ‘oh no’ and things start falling apart. That’s when we usually get players high fiving at the end when they’ve adapted to something catastrophic and they’re able to hold up against that curveball,” Fowers said. The game is currently tuned to a casual difficulty, but Fowers said that there will be ways to ramp up the difficulty. 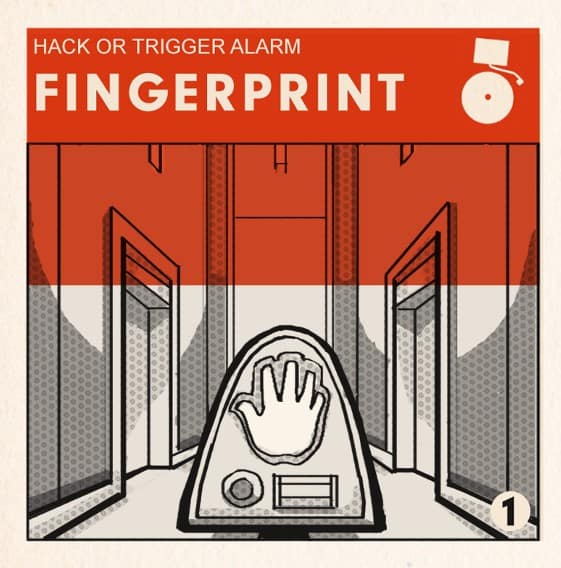 Interaction between the players is important for co-operative games, otherwise games can end up as four-player solitaire and Fowers hopes to tackle the problem by always having to consider how you’re actions are affecting others. “You have to always consider where you’re going and how that will affect the guards movement toward your teammates. I’ve seen a lot of times where people will sacrifice one of their stealth tokens to protect one of the other players,” said Fowers. Most of the interaction in Burgle Bros. looks to be indirect, but that makes sense for its theme and it does force players to think about what each other player is doing, which is definitely a good thing.

The “alpha geek” problem of one player taking over as a de facto leader and basically playing the game entirely by himself is another common problem for co-operative games, but Fowers said he hasn’t seen much of that in his playtests. “The problem is complex enough that it takes a lot of people to come at it,” he said. In addition the plan is always shifting as the guards shift their patrol so it’s difficult for one player to think too far ahead.

The Burgle Bros. Kickstarter will end April 4. Pledging $29 gets you one copy of the game and you can get up to three for $29 each. The game plays one to four players with a game-time of 45 minutes to 90 minutes. Fowers is also the designer of co-operative Chinese restaurant game Wok Star and deck-building/Scrabble game Paperback.