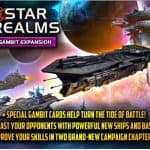 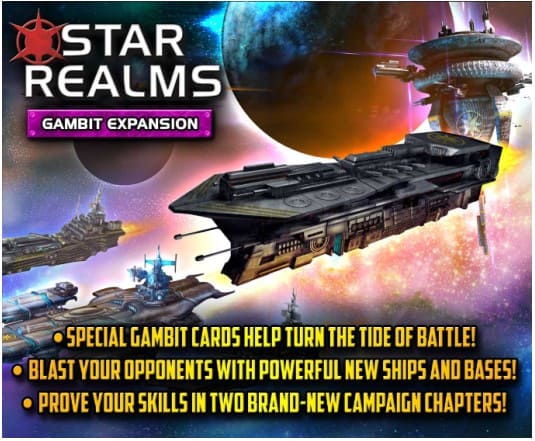 The creators of Star Realms, the popular small-packaged deck-building game, brought the game to our mobile devices not too long ago. A Gambit expansion was released for the physical card game and now the digital version gets Gambits as well. This Gambit expansion will add 9 Gambit cards that give special abilities to the players throughout the game, as well as 15 new ship and base cards to choose from.

New ships in the trade deck:

New bases in the trade deck:

Campaign updates include two new chapters to work through. Players can pick up Gambits as they successfully finish new campaign chapters, and have the ability to use them in future games, or can choose to attempt future missions without the help of the Gambits. If you like setting up a challenge for yourself, that might be the way to go!

New updates that you’ll see, even if you don’t purchase the expansion, include new leaderboards, faster card animations, and more help for new players as they maneuver through the game. After you purchase the full base game ($4.99), you can pick up the Gambit expansion for $3.99. The expansion should be available for PC and mac as 12:01am on March 5, and for Android and iOS later in the day.