In space, your best chance at survival in war is based on critical choices. Do you keep your allegiance to one faction, or split your efforts among many to bring out the best in all of them to take out your opponent? Star Realms is a fast-paced deck building game that packs a lot of fun in a very small package. After a very successful Kickstarter in 2013, the folks at White Wizard Games (Ascension co-founder and a Magic Hall of Famer) produced Star Realms for the gaming community, and it has gained a lot of popularity, selling out almost as quickly as it gets restocked in stores. Let’s see what all the fuss is about.

Star Realms comes in a small box that will contain the following : 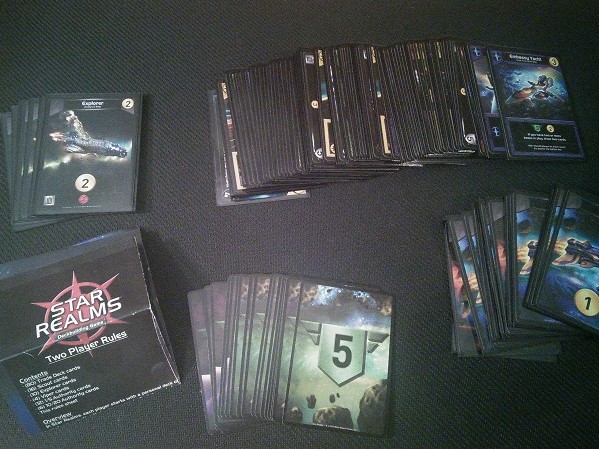 In Star Realms, two players go head to head to reduce their opponent’s Authority to zero. Before we get started, you’ll need to know what Authority, Trade, and Combat icons look like, and what each resource does.

Authority is essentially your life total and will be the target of your efforts. Some factions enable you to gain Authority by playing cards or triggering an Ally ability – but we’ll get into that soon.

Trade is the currency used in Star Realms, and it is used to purchase ships and bases from the Trade Row to buff up your forces.

Combat is pretty straight-forward. The number indicated inside the Combat symbol is how much damage your attack will do that turn.

So, getting right into it!

Each player starts with 50 Authority. The center of the table will always contain the pile of Explorer cards, 5 cards drawn from the Trade Deck (called the Trade Row), and discarded cards go next to the Trade Deck. Each player will take their starting deck (consisting of 8 scouts and 2 vipers), shuffle them, and determine the first player. 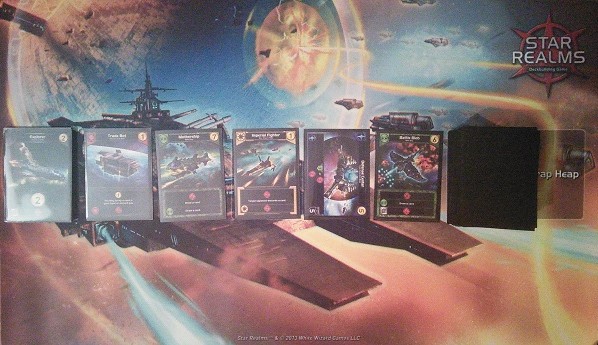 Explorers to the left, 5 cards laid out in the Trade Row, Trade Deck, and a Discard

First player will draw 3 cards, second player will draw 5. The first turn the first player takes is the only turn that only 3 cards will be drawn – each player draws 5 on all subsequent turns. A turn consists of the Main Phase, Discard Phase, and Draw Phase.

Let’s take a look at some of the cards you’re going to see, and how to use them. First thing to note is that it doesn’t cost anything to play a card. The only time you will pay a cost for a card is when you get it from the Trade Row. The cost of the card will be in the upper right of the card in the yellow Trade circle. When you purchase a card, it goes directly to your discard pile. When a card is purchased from the Trade Row, it is immediately replaced. There should always be 5 cards available in the Trade Row. 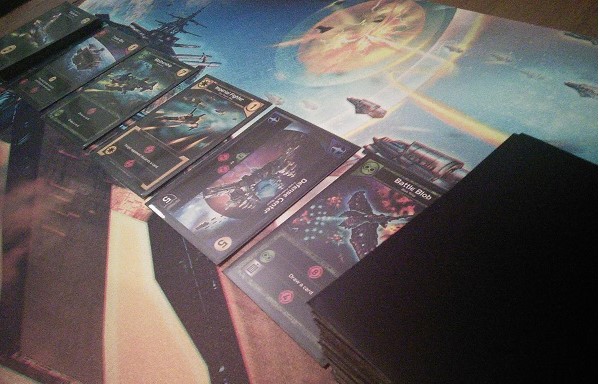 Play cards from your hands to total your Trade value, Combat value, and Authority gain for the turn.

We will start with Ships. Ships belong to one of the 4 factions you’ll encounter in Star Realms. These factions include The Blob (big green ships that usually pack a lot of Combat power, especially when played with other Blob cards), Trade Federation (lots of Authority gain), Star Empire (nice balance of Combat and Trade with a lot of deck manipulation), and Machine Cult (Combat, Combat, Combat). 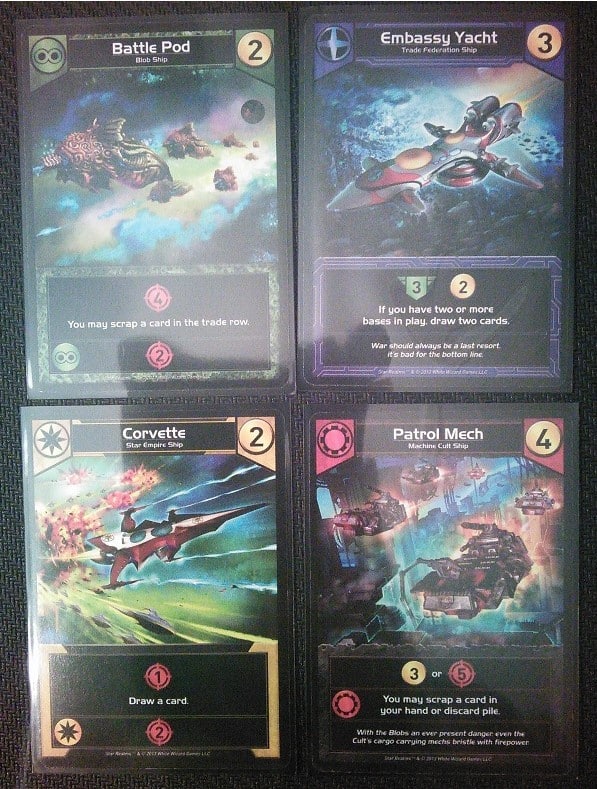 Ally abilities trigger when you have another Ship (or Base) in play of the same faction. These abilities may trigger at any time during your main phase. Discard abilities allow you to send the card to the Scrap deck next to the Trade deck. These do not return to your hand, so scrap them wisely.

Next, Bases. Bases stay in play until destroyed. Bases have a shield in the bottom right corner with a number. This is the Combat value that must be met in order to destroy the base. Bases give you benefits every turn until they are destroyed. For Bases with a silver shield, your opponent may continue to attack your Authority total and ignore the Base. However, Bases with a black shield that say “OUTPOST” above the shield are special. These Bases must be destroyed before your Authority can be touched. For example : If Player A has a Combat value of 3 and Player B has an Outpost Base with a defense of 4, nothing happens. Player A cannot breach the line of defense. However, if in the same situation Player A has a Combat value of 5, they can destroy the base, and decrease Player B’s Authority total by 1 – it spills over.

So after playing cards, totaling your Combat/Trade/Authority values, purchasing cards, and attacking your opponent, all cards from this turn go to your personal discard pile. Any unused Trade disappears and cannot be saved for your next turn. In the Draw phase, draw 5 cards, and your turn ends. If at any time you need to draw a card and cannot, shuffle your discard pile and place face down to create your draw pile. Each player repeats these steps until one player is reduced to 0 Authority.

I’m a big fan of deck-builders, and I’ll say that I was a bit skeptical that this game would be as good as people made it out to be. I mean, c’mon…it came in a small deck box, that was it! Star Realms really impressed me. The game changed every time. Just like in other deck-builders, you may find you have a favored faction or faction combo (I’m a Blob/Trade Federation junkie), but that doesn’t mean that your games will always go that way. I’ve found myself in the territory of teaming up with the other factions to secure a win, or went down in the fight with them. The fact that each game varied so much gave it high re-play value for me, and it became one of my favorite deck-building games.

I felt that the cards are easy to read and the game is fairly straight-forward. It can get a bit crazy counting up your values, especially when there are a lot of Ally abilities going off, more cards are being drawn, and more abilities go off. However, it keeps me focused and I find myself playing much more strategically than I do in other deck-builders. I like Base abilities, and how Outposts really do provide a decent buffer against your opponent’s schemes. You do have to watch what the Bases do, because if you aren’t paying attention on your opponent’s turn, especially to the Bases that aren’t Outposts, they can create a devastating turn for you if your opponent is stocking up on same-faction cards.

The art is bright and eye-catching, and I like the overall layout of the cards. We found card quality to be high, the cards have a decent thickness, but did sleeve it due to frequent table time. There is some humor in the text at the bottom of some cards, but has no direct tie to gameplay. 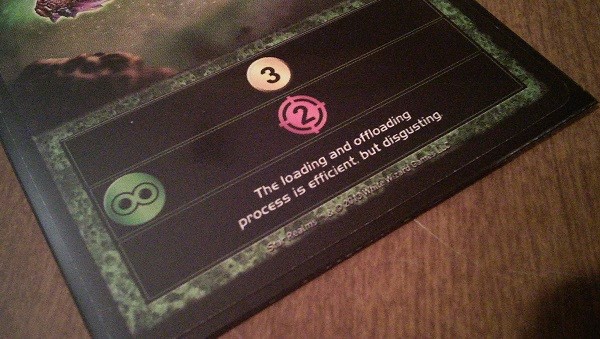 We sleeved our game quickly after realizing how great the game was, but found that the game no longer fit in the original box. As you can see in this picture, we cut out some key parts of the box and used a clear plastic deck box to store our game. It isn’t perfect, but it hits the table quickly this way, and works for us. There are some better solutions out there, and we’ll be upgrading soon!

Star Realms is $14.99 MSRP, and is a great price for this fun deck-builder. In some of the photos you’ll see that I am using a Star Realm Play Mat, but please bear in mind that it does NOT come with the base game. You can buy the War World (the one I use) or Battle Mech playmat on Amazon for $25.00 each.