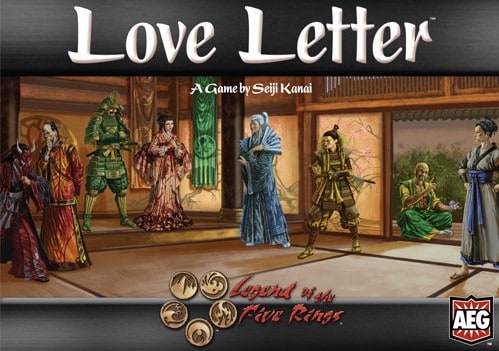 As Love Letter gained popularity, the gaming world could see it coming – with many games set in similar universes produced by Alderac Entertainment Group, a Legend of the Five Rings version of Love Letter was bound to happen. In 2013, AEG released an L5R version of this wildly popular game. Does Love Letter set in the Emerald Empire have what it takes to earn a place on your game shelf? Let’s take a look!

Love Letter : L5R Edition comes in a small box, and features art of the L5R world. Inside the box you’ll find:

The cards are of the same quality as the original Love Letter game with artwork unique to the world. 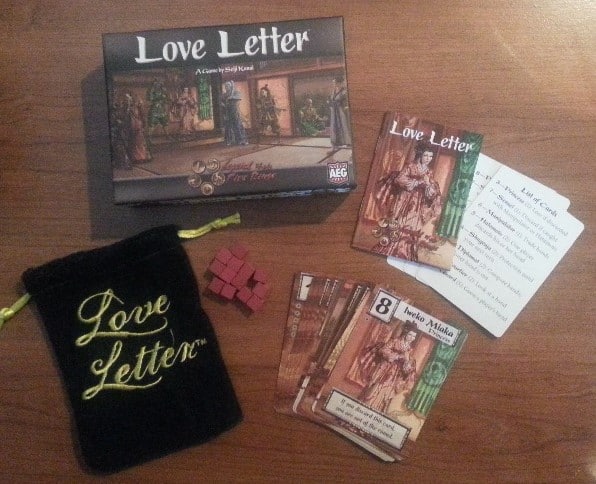 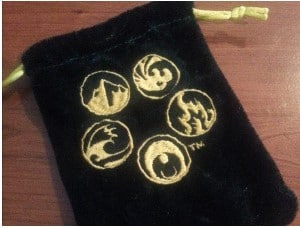 Details on the back of the bag

The rules of Love Letter: L5R Edition are the same as the original game, so please check out Don’s review for rules overview. In regards to change, this version just contains visual change. The font is different and the artwork is tied to the L5R universe. The biggest change? The characters have names/titles, but their roles remain the same. For example, in the original game, the King card would allow you to trade hands with another player. In this version, the “King” card is the “Manipulator” named Doji Takato, and has the same ability.

There isn’t a lot to say about this edition, mostly because the rules do not change, and besides some name changes, the game is the same as the original. So, what is my opinion? I am not personally a fan of Legend of the Five Rings, so the lore and reference to the world itself doesn’t make a big difference for me, but I think the artwork is amazing. From the visual perspective, I prefer this version over the original. I will safely say that if you or someone you’re shopping for likes Legend of the Five Rings, that this would be a fantastic buy.

Love Letter: L5R Edition is $10.99 MSRP and will make a great addition to the collection of a L5R fan.