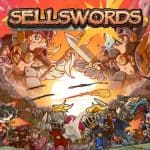 You are reading
Written Review – Sellswords 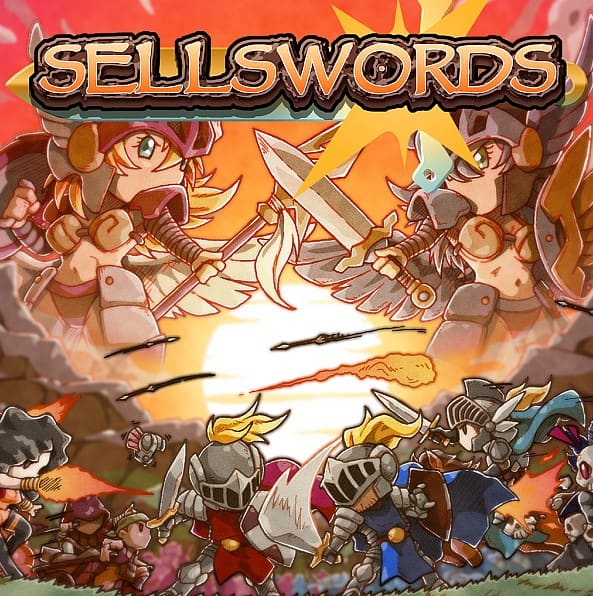 The fields of battle are strewn with warriors, mercenaries, and fighters of all kinds. When it comes to talent in the kingdom, you’re never going to run short of finding it in Asgard. It’s a red banner versus blue banner sort of war out there and you’ll need to choose your warriors carefully. Your forces better have the strength to turn their opponents to fly your colors in the heat of battle, but beware, if you don’t watch yourself you could end up with The Fool, and everyone knows that’s totally bad news!

When you open the coffers of Sellswords, here’s what you’ll see:

The components of Sellswords are short and sweet. Since this is a light card game, you’ll only be getting cards to use, though the cards themselves are a bit larger than your standard playing cards. Their quality is great, though, and you won’t find any cards bending easily or coming off too flimsy. I’ll say this, however: make sure you store the cards in a nice manner or they’ll become warped over time.

Taking to the Fields of Battle

If you’ve ever had the chance to play Triple Triad, a card game within the Final Fantasy VIII RPG then you’ll be right at home with Sellswords. Sellswords is a strategic tile/card placement game specifically for two players. Through the game you’ll place your cards on the table and compare their numbers to those of the cards adjacent to them. If your numbers are higher than those of your opponent’s cards adjacent then you flip those cards over to your color. Once each player has played out their hands you score each row and column and total your points. The player with the most points after two rounds wins! 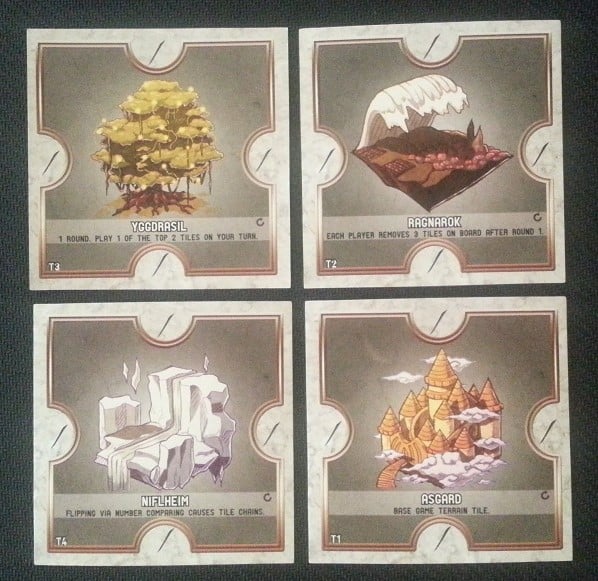 Terrain cards offer some great options for spicing up the game.

Let’s start with some setup to get a bit more detail on the game. First off you’ll take all the Hero cards and shuffle them. Afterwards you’ll deal 12 Hero cards to the center of the table and put the rest to the side – they won’t be used for the rest of the round. From the 4 Terrain cards, you’ll select 1 (usually the Asgard card, which is general Terrain) and place it on the table to start your play area. This Terrain card will serve as a starting point for you to place your Hero cards, though it doesn’t have to be the center of the play area. 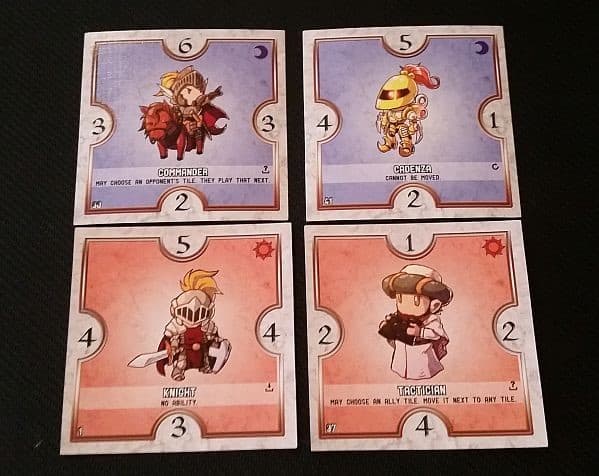 The Hero cards have two sides, one for each color. They also contain numbers and a special ability!

Players will randomly select who goes first and that player will choose which color they’d like to play. Then, beginning with the first player, each player will choose a Hero card from the 12 dealt to the table earlier, one at a time. Each player should end up with 6 Hero cards with which they’ll play during this round. Hero cards have some information on them, all of which is important. First off, take a look at the numbers on the card. These numbers indicate strengths of the card. When you place a Hero card on the table you must pay attention to how you place it. Hero cards can be placed in any orientation, the only restriction being that they must be placed adjacent to a card already on the board. If the numbers on your card are higher than your opponent’s on the cards directly adjacent to where you placed you will then flip their cards over to your color.

Secondly, each Hero card has a special ability. Some are optional, some are mandatory, some are continuous, and some happen at the end of the round. The abilities range from increasing the card’s numbers based on allied (cards of your color) cards adjacent to it, while others could allow you to immediately swap places of some cards.

The game is played over a series of rounds, in which players take turns. On your turn you’ll play one card from your hand of Hero cards, paying attention to its orientation and making sure you place it with your chosen color face up. Then your opponent will have a chance to play a card following the same rules. Broken down, here’s what happens on each player turn: 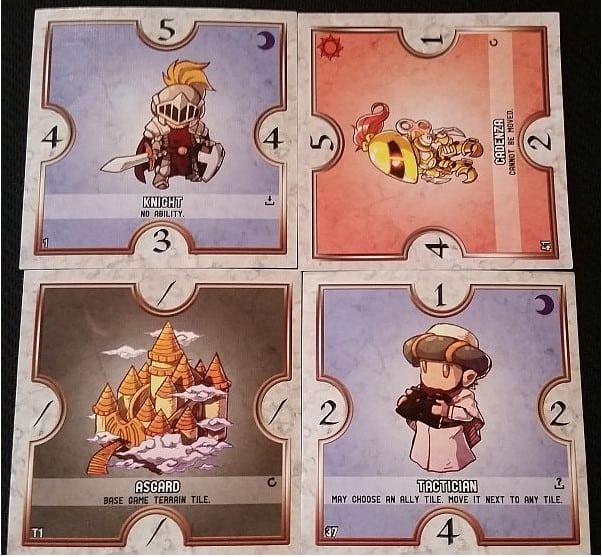 In this example, the red card placed would flip both blue cards since the numbers matched are each higher.

Once both players are out of cards the round is over and you score the round. At the end of the round you’ll have a play area of a 5×5 grid. Once a row or column has 5 cards in it you cannot add cards to it, as it’s considered “locked”. When you score the round, the game’s rulebook has a table that shows you how you earn points. Basically you’ll score each column across and then each row down, or vice versa. You earn points based on the number of cards in the row/column showing your color. Scoring goes as follows:

When you’re finished scoring the first round, start at the beginning of setup and play one more round. At the end of scoring for the second round the player with the most points wins!

Flipping the Tide of Battle

Level 99 Games has a great way of keeping pixelated gaming memories of the past at forefront of gamer’s minds. Playing this game immediately took me back to my glory days of playing Final Fantasy VIII when I was trying so hard to get secret cards to unlock items and abilities from Triple Triad. What’s different here is that instead of having card elements like Triple Triad you’re outfitted with abilities that can change the game on a dime.

What’s more is that there are SO MANY cards in this game that I’ve not even seen them all yet. The drawn Hero cards are random for each game, so there’s never any telling what you’ll be playing with. Strategy is important in the way that you place your cards as well as choosing what time to play certain cards. I’ve seen too many times where a card held till the last minute can completely change the play area, leaving my opponent changing an entire row or column to their color.

I think Sellswords is a great filler game, and for a two-player game I couldn’t ask for much more. It sets up extremely easily, plays very fast, and leaves a lot of room open for replayability. It would be a great game for trips, or for breaks at work. Heck, you could even bring this game to meetings or play it in between sessions at game night.

Now I’ve heard some say the cards need to be punched in the corners so they play better and to avoid “dog-earing”, but I haven’t come across that issue yet. The cards are sturdy and the artwork is just plain amazing. I definitely recommend Sellswords to anyone that is wanting a two-player strategy game that packs a big punch in a small box!