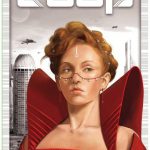 You are reading
Written Review – Coup: The Resistance 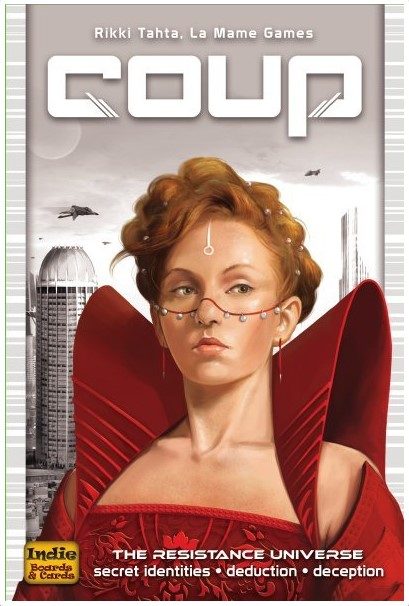 In the future, the government is run completely for profit. All but a privileged few live their lives in poverty and desperation. Out of these oppressed masses The Resistance rises, and the coalition seeks to topple everything as it’s known to modern society today. Their goal: to throw the government into total chaos. Where will your influence lie? How will you get ahead in these trying times? It’s time for you to make the final coup.

Coup: The Resistance is a reskinned version of the original game, Coup. The game successfully funded via Kickstarter and now it’s available in retail everywhere. It’s set in the same universe as The Resistance, which gives it that cyberpunk-ish, dystopian future theme. Just like The Resistance, Coup: The Resistance plays fast, hard, and gets harder to master each time you slap it on the table. Players will use deduction, secret identities, and deception to ensure that they’ve got the influence it takes to sway the new-age government and make better lives for themselves. It won’t be easy, though, as someone will always be waiting to stab you right in the back to get your place of power!

Coup: The Resistance is a small box game, which means it’s a game that takes up little space on your shelf. Everything you need to play is inside its tiny box, and there’s no need for downloadables, additions, or anything of the sort. Here’s what lies inside the box that you’ll get with Coup: The Resistance:

Look at all that money!

Tossing Around Your Influence – How to Play

I’m going to write this review assuming that you don’t know what the original Coup is, or how to play it. That being said, Coup is a game where players will play identity cards to gain influence and use actions. The goal is to eliminate the influence of the opposing players by deducing which identities they have (or don’t have) in front of them, thus resulting in their nullification during the game. Starting at the beginning, here’s a breakdown of setup: 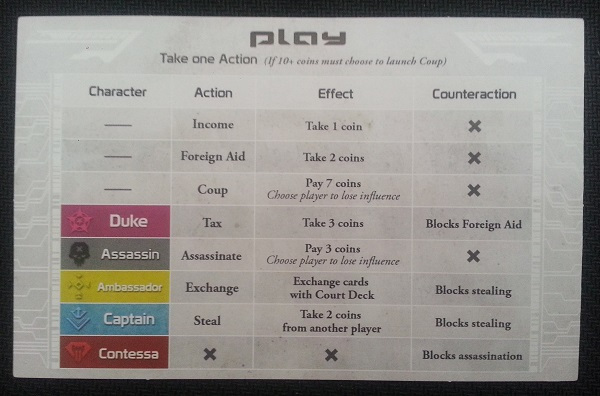 The Player Summary shows the list of actions to choose from and who grants those actions.

Now I know you’re asking yourself, “Hey, how do we even lose influence in the first place?” Well, it’s simple. Throughout the game you’ll be using the identities of the characters in court to take actions. Each player, on their turn, will choose a single action to take. Some actions are free (meaning they don’t require you to have a certain identity card), but if you look on the Player Summary card, it shows that the identities you have in front of you dictate which other sort of actions you can take. For example: the Duke allows you to take 3 coins from the Treasury. Now, it’s perfectly legal to take this action if you don’t have the Duke in front of you, but this is where the strategy comes in. 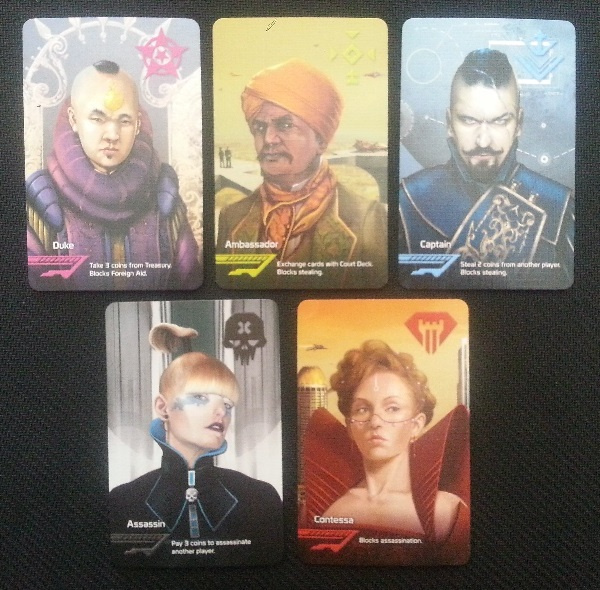 Remember how we were talking about losing influence? Well, if you take an action that’s not a free action, nor an action granted by an identity card in front of you, other players are free to challenge that action. If you’re challenged you MUST prove yourself by revealing that you hold the required identity in front of you. If you do, in fact, have the correct card and are justified in taking the action, the challenging player loses an influence. On the flip side, if you cannot’ prove it you’ll lose an influence instead.

If you win the challenge you must immediately return your shown card to the Court deck, reshuffle it, and take another identity card from it and put it facedown in front of you. Challengers who fail simply lose an identity card of their choice to the discard pile and remain playing the game. The player with the last remaining influence at the table will emerge as the winner.

Government: Corrupt, or Not So Much?

Just like The Resistance, Coup: The Resistance provides lots of fun. Here is another game that I can bust out and get several plays of within an hour. The gameplay is simple enough that you can pick it up within a couple of games, but the more you play it the more difficult it becomes to pull the wool over your other player’s eyes.

I am a fan of deduction games, and Coup: The Resistance really helps bring that gameplay element to a head. Through the game you have to figure out who has what identity card, how many of the identity are available in the deck, how likely it is for those identities to be in play, and know when to call someone on their bluff. Don’t worry, though, because you will get burned. The good news, though, is that through being burned you can learn what shots to call in later games.

Adding to this, Coup: The Resistance really helps you beef up your deception game. Through playing you’ll need to learn how to bluff out your fellow gamers and pull a fast one when needed, simply to keep yourself in the game.

I’m in love with the ISK!

Finally, the game looks great. Just like with The Resistance the components for Coup: The Resistance mimic that same dystopian, yet futuristic feel to the game. The artwork is completely on-par between both games and the components are great quality. One thing I was afraid of was that the cards would come out too thin and flimsy. I am happy to say I was wrong, and even though I’d suggest sleeving them (just because I’m all about protecting my games that hit the table real often) the cards won’t be bending or ripping anytime soon.

Coup: The Resistance is a great filler game, and it can be played over an over again in just a short amount of time. The more people you introduce to it, the more exciting the game gets as well. One of the things I really enjoy doing is having nights where I play The Resistance and Coup: The Resistance in the same session to try and build a world between the two. If you’re looking for a great gateway game, or something that fits the deduction and deception docket well, Coup: The Resistance would have my vote!