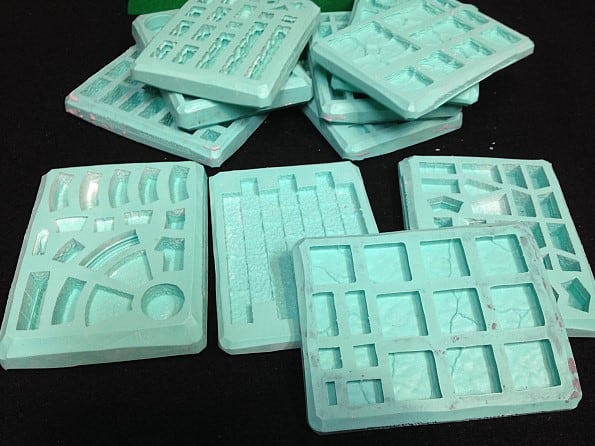 About a decade ago, I stumbled on a website that was selling molds that allow you to cast blocks to make all sorts of creations – www.hirstarts.com – and at my first Gencon, I decided to buy a mold and try it out. They looked simple and given enough casts, you could make huge and wonderful buildings. To that end, I picked up the Wizard Tower mold (mold #50) and once home, I went ahead and purchased the recommended 50 pound bag of dental plaster.

The casting process is pretty simple – mix some plaster and pour into the mold. Wait around 6 minutes and scrape the excess plaster from the top. Allow the blocks to dry for around 25 minutes and remove the completed pieces (I recommend to allow them to set for about 24 hours; longer if you can help it). The website has a bunch of tutorials that a beginner can easily get started with a bag of plaster, a mold and a little time. 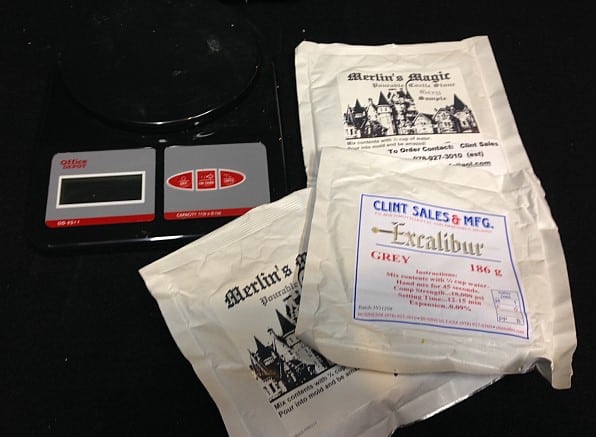 For a perfect mixture of plaster and water for casting, I decided to buy a scale.

Back to my experience – I wanted to make the tower as described on the website so I needed to cast that mold 18 times. After what felt like weeks, I finally had all the needed blocks. I bought a tube of Aleene’s Tacky Glue from the store and got to building. It was then when I realized that making perfect right angles for the blocks while gluing was next to impossible without help. So I stopped after the first floor and bought some Lego blocks to use as a corner as per the website’s instructions. After getting that building aid, it became increasing clear after about half way to the top that all my blocks weren’t the same height and had bubbles (some pretty large ones). If that wasn’t enough the completed tower was to be only 4.5 inches by 5 inches (in RPG scale, a mere 22.5 x 25 foot building). In the end, I decided to make a ruined tower for use in miniature gaming.

After many castings, you start to get a collection of bricks.

In the process to make perfect bricks over the years, I have bought a scale to measure the plaster precisely and to remove the tiny bubbles, I built a homemade vibrating table. Even with those aids, I still can’t cast blocks without imperfections– no matter how much ‘wet water’ I try (see the website for an explanation). This, along with the fact that I don’t have a use for the molds that I bought over the years (I am definitely more of a board gamer over a miniature or role playing gamer these days) they don’t get used for much anymore. Most of my builds from the blocks are small walls and ruined buildings that are perfect for my miniature gaming needs (I just can’t imagine the need for a 4” round tower – mold #52 or an octagon tower – mold #63 these days).

Most of my creations have been simple designs for miniature gaming.

Last year, I noted that I wanted to build enough tiles to make a decent dungeon. I calculated that I would need 550 square inches worth of blocks which means I need to cast the cavern mold that I have (mold #281) over 42 times! That doesn’t even include any walls – just corridors and rooms. If motivated, it wouldn’t be so bad – you can crank out two casts in a little over an hour (so after a full weekend worth of casting you could have all the blocks needed). I might get back to it if I ever need any dungeon tiles –sadly that is not my current focus at the moment.

In conclusion, these blocks are amazing and can be used to make awesome buildings, but they are not for everyone. I recommend that you try them before you buy to see if you will like building with them.

Easy – Once you have the technique down, you can make endless buildings, corridors and the like with a single mold.

Selection – There are a ton of different molds available that you can make fantasy dungeons, sci-fi buildings and even hexagonal rocks!

Cheap – Being able to build an entire dungeon with two molds and a 50 pounds of plaster is much better than some pre-made dungeons out there.

Tedious – Most designs require a mold to be casts cast twenty times or more – I can’t imagine how many blocks would be needed for a full castle!

Messy – You are pouring plaster into a mold – cover all surfaces that you care about with newspaper/trash bags.

This week, I got to play The Castles of Burgundy. This game came out a couple of years ago and I have heard decent things about this one, but I haven’t played it until now. The first play was fantastic and I can’t wait to play this one again! It feels like a combination of Puerto Rico and Alien Frontiers. Before I comment too much on this one, I would love to get a couple of additional plays, but I can see why it is in the top 20 at BBG.

Lastly we played a couple of games of Roar-a-Saurus. This is a great little game that I can’t recommend enough. It isn’t for everyone I admit, but it’s a quick dice game when you only have a couple of minutes between longer, more complex games!