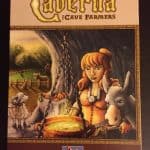 You are reading
Written Review – Caverna: The Cave Farmers 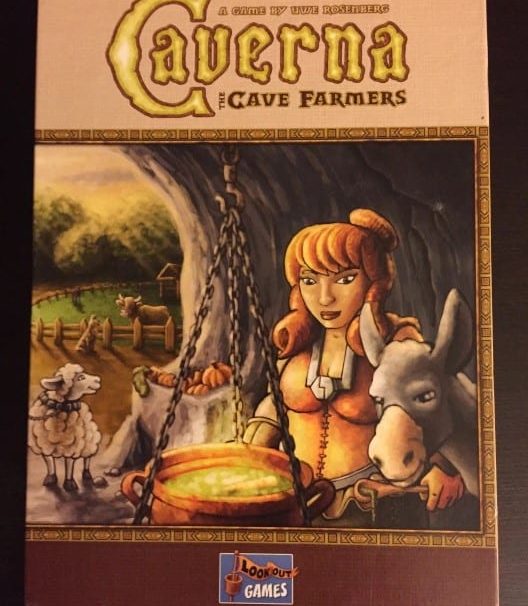 “A dwarf standing on the shoulders of a giant may see farther than a giant himself.”

Are you ready to rock and/or roll? Prepare to clear rock out of your dwarf family’s cavern to create space for a ‘Cuddle Room’ where you can hug your livestock. Perhaps you’d like a ‘Brewery’ instead where you can convert food to beer! Roll logs and wood out of the way in the nearby forest to create pastures and fields to raise livestock and grow food for your dwarf family. Caverna offers you the chance to create the ultimate dwelling for your family of dwarves.

Caverna by Uwe Rosenberg is the spiritual successor to his previous hit game Agricola. It’s actually referred to as “Agricola 2.0″ in the rulebook. Caverna builds and expands on Agricola including using mechanics from previous Rosenberg games such as the ‘clearing’ mechanism of Ora et Labora.

Caverna has some of the best components I have ever encountered in a board game. They are
very high quality and there are enough components to support a 7 player game!

Caverna has some of the best components in board games. The shaped wooden pieces are fantastic! 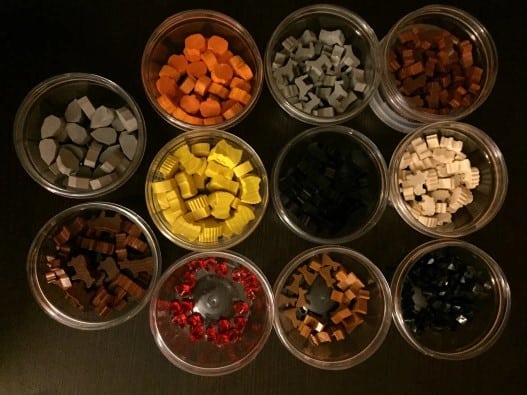 Not only are the components high quality, they come in quantity as well!

At its heart, Caverna is a worker placement game. Each player begins with their own player
board (divided into squares) which represents their cave and the nearby forest. Each player
starts the game with two dwarves (this number can be increased throughout the game) to
build out their cave and forest however they like.

Your cave and surrounding forest at the start of the game.

On a player’s turn, they select one dwarf and place them on any empty space on the main
board and then execute the action on that space. Some spaces provide players with
resources such as ore, wood, stone, grain, etc. Other spaces allow you to take actions such
as going adventuring for rewards, growing your family, or clearing spaces on your player
board so that you can build new things in your cave or forest.

The main or ‘action’ board in Caverna offers players a lot of different choices in a round.

The blue player is focusing on gaining ore this round. I wonder what they’re planning?

Once you have cleared spaces you can use your resources to build different things in the
caves and forest. These things are represented by tiles that take up either one or two
squares on your player board. The clearing and tile laying aspect of the game adds a minor
but fun puzzle element that has you trying to maximize your cleared space.

In the caves you can use your resources to build mines (which in turn generate resources)
or room tiles which have a variety of abilities ranging from allowing you to grow your
family (allowing you take more actions per turn) to allowing you to convert one resource to
another to generating bonus points at the end of the game. There are a wide variety of room
tiles and they allow for many different strategies. Each room tile is also worth a certain
amount of points at the end of the game.

You’re telling me your cave wouldn’t benefit from a cuddle room?

In the forest when you clear spaces you can create fields to grow grain or vegetables or
pastures to raise livestock. Like the room and mine tiles these tiles also have point
values. These are also important because they generate food which is necessary since at
certain points in the game you have to feed all of your dwarves. If you don’t have enough
food you will be forced to take a ‘begging’ tile that will subtract points from your total
at the end of the game.

Once all players have placed all of their dwarves the turn ends. At the start of the next
turn more actions will open up each turn until the final turn when all actions are
available. After the final turn players add up their points and the player with the highest
total wins!

Caverna is simply an outstanding game. It gives players interesting options in every game
and a wide variety of strategies to choose from. Do you want to be a jack-of-all trades
dwarven clan with farms, mines, and a variety of rooms? Or do you want to be a mighty
warrior clan obsessed with adventuring and its rewards? Or perhaps you simply want to be
the sheep impressario of your area. All of these (and many, many more) are strategies you
can pursue to victory in Caverna. The excellent components and wide open gameplay make
Caverna one of the best games I’ve played.

I wanted to add a brief note highlighting my experiences playing Caverna with people who
were familiar with Agricola. The two games are very similar but with some key differences
that seemed to affect peoples’ reactions.

There were two noticeable reactions. First, people who were familiar with Agricola and
didn’t like it reacted very favorably to Caverna. This was likely due to the removal of the
strict feeding schedule (it’s much easier to feed in Caverna) and the scoring matrix being
much more open (points for everything, no penalties for not having a little of everything).
This made Caverna seem much less ‘punishing’ and more fun for this group. The second
reaction was from people who were familiar with Agricola and really liked it. This group
seemed to dislike Caverna, feeling it was too easy and that while the room tiles offered
variety it didn’t compare to the E,I, and K card decks that can be used with Agricola. This
group seemed to feel Caverna was a ‘point salad’ experience and lacked the hard choices
Agricola offers.

Personally, I think the games are different enough to justify having both in your
collection if you’re a fan of Uwe Rosenberg or worker placement games but your mileage may
vary. Also, as a bonus you can use most of the very nice Caverna components in Agricola!