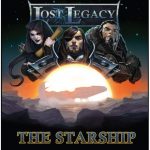 You are reading
Written Review – Lost Legacy: The Starship 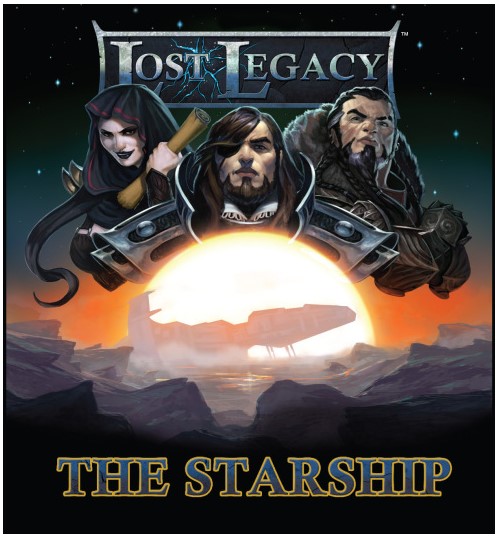 A stranger came to your homeland in a ship that broke apart and scattered across your world. Known at the Lost Legacies, they are mysterious and legendary constructs that everyone wants to get a hold of and control. A prophetess appears and claims to know the location and power of one part – Lost Legacy: The Starship. In this strategic, quick card game, use deduction and card effects to determine the location of the Lost Legacy and claim victory!

Lost Legacy: The Starship comes in a plastic case that contains the following:

The art in Lost Legacy: The Starship was done by Diego Grisbert Lorens and is part of AEG’s Big In Japan game line. 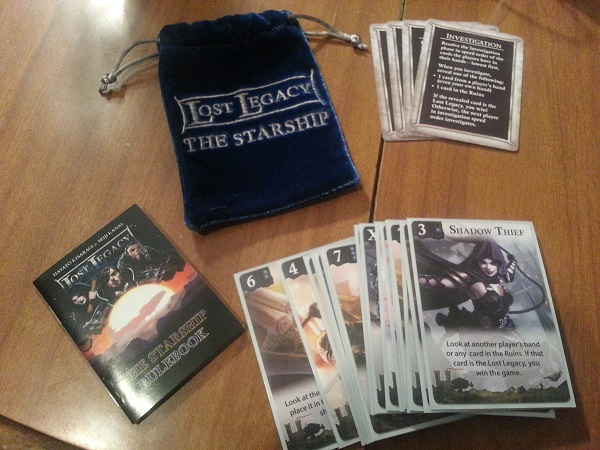 Lost Legacy: The Starship is a fairly straight-forward game. Hand out a Reference card to each player. shuffle the Game cards, then place 1 card face-down to create a Ruins row. All players draw a card, and you’re ready to start the game.

Let’s look at a card for anatomy. The number in the upper left is for Investigation speed once the deck runs out. There is a space next to this number where 1-3 pips will be filled in – this indicates the number of copies of this card that are in the game, or the card’s rarity. Across the top is the name of the card. The space below the art details what each card does when played/revealed, and the art at the bottom of the card identifies what set the card comes from. (More on that later.)

On a player’s turn, they will draw a card from the deck, and then play a card from their hand. Each card has effects, and they go into effect once they hit the table.Some of the effects enable you to look through cards in the Ruins, exchange cards in the Ruins, and exchange cards with other players. Cards are added to the Ruins through the effects of some cards, and these added cards are placed to the left of the current Ruins pile, and continues to the left. 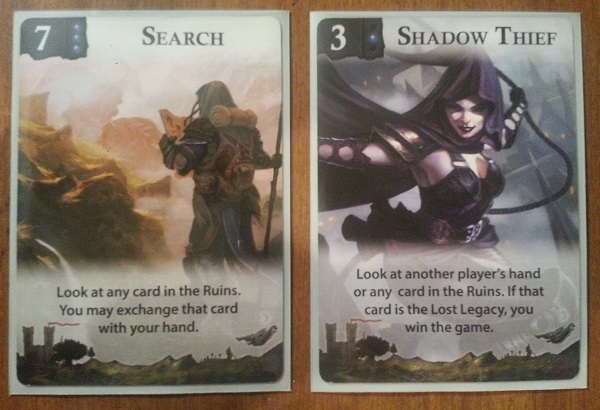 Some cards immediately eliminate other players if they are looked at. The Lost Legacy: The Starship can’t even be played. 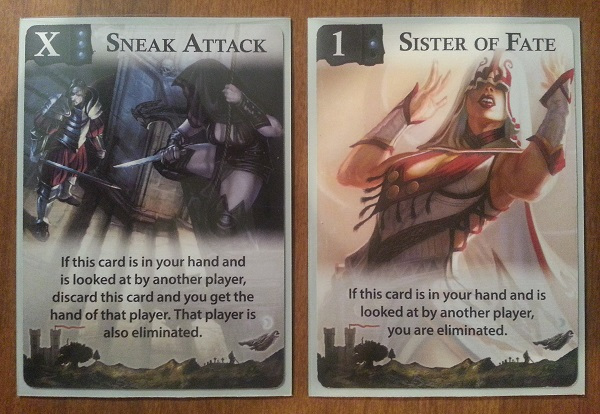 Turn passes to the next clockwise player, and continues until the deck is empty.

Thoughts On The Starship’s Tactics

Lost Legacy: The Starship had me fooled as I expected the game to be nearly identical, besides theme of course, to Love Letter. This was not the case. The artwork and short story leading the rulebook had me hooked and I found myself very much into this game. This game is really easy to pick up and learn quickly. I like games that don’t even need a rulebook, and with some basic card game knowledge, this game falls into that category. The Reference card is brief and to the point, and after thumbing through the cards, everything made sense. 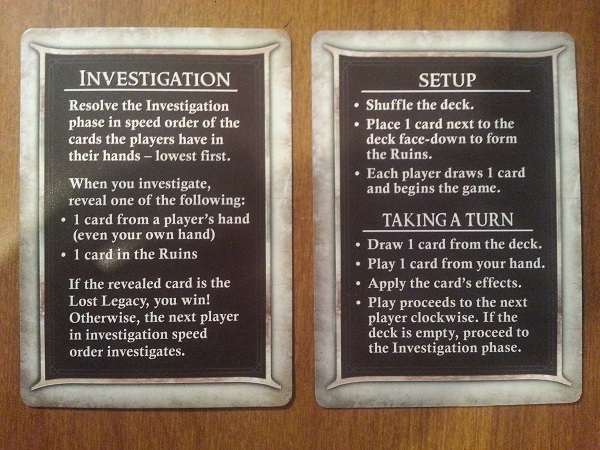 In essence, Lost Legacy: The Starship combines the best of smart card playing and card tracking. Holding Lost Legacy doesn’t mean you have a surefire win, and the only way to ensure a win is to be confident in knowing where it is. This is where exploring the Ruins is a fun mechanic. With the Ruins laid out in a line, you’re likely to know where your desired card is if you’ve had a chance to peek through it. However, there are cards that allow you to also shuffle the Ruins. If you look at a card in the Ruins that an opponent has also looked at, you  may want to throw them off course by choosing to shuffle the Ruins. You now don’t know which card is the Lost Legacy, but neither does your opponent.

There are some optional rules for the game that are available for those that are ambitious! The Megamix Set game allows you to create a set of 31 cards. Put all of the cards from this set, plus all the cards from another Lost Legacy expansion set (minus one of the Lost Legacy cards) together, and have at it. There is also a campaign mode similar to that found in Love Letter, though this first set doesn’t come with cubes to mark points. In addition, there are rules to creating custom sets by swapping out cards that you enjoy from other expansion sets. Our review for the first expansion to this game is coming later this week, so keep an eye on us!

If you’re looking for a good travel game, something to play in between larger games, or just enjoy a good puzzle game, I’d point you this way. It is standalone but able to be made much bigger with expansions. Lost Legacy: The Starship retails for $9.99. This tiny game won’t make a huge dent in your game budget, but is highly addictive and is highly replayable.