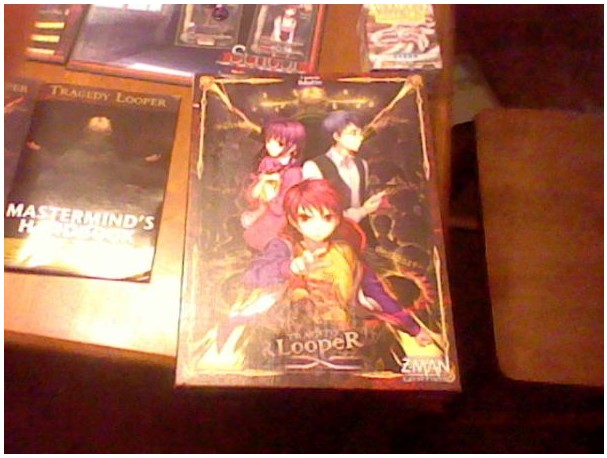 So, show of hands here: How many of us have ever watched Doctor Who and gotten mad because he doesn’t just go back in time to stop everyone from dying? Anyone? OK, so that’s pretty much what Tragedy Looper as a concept boils down to. You and two of your best friends somehow gain the ability to travel back in time! How exactly this happens isn’t particularly relevant, even by the admission of the people writing the game. So, do you go back in time and win the lottery? Get the dream girl/guy? Be a complete and unadulterated badass at everything in life? No, that would be too obvious! No, what you do is delve right into every horrible situation imaginable!

At its core, Tragedy Looper is a co-op game where three people gang up on one, a la MTG Archenemy. The lone player, referred to as the Mastermind, is responsible for causing murder and mayhem throughout the town, leading to Incidents. The three players, referred to as the Protagonists, must interact with the townsfolk in order to stop the tragedies from occurring (those of you familiar with Ryukishi07’s Higurashi no Naku Koro ni should be comfortable with this concept).  The twist in the matter is that if you fail, you can go back and try again, each time working a different angle to solve the mystery of how to find the happy ending.

The focus is on the Protagonists to win: if they can manage to survive one loop without triggering a loss condition (someone they were protecting dies, a specific event or circumstance occurs, or the Protagonists themselves are killed), they win! Thing is, they only have so many loops to do it in, and then it’s Game Over. There is an optional rule allowing the Protagonists one last chance to win after all else fails, and if you’re playing for fun, I encourage using it, as I have yet in the span of 10 games of being the Mastermind  to have the Protagonists win a loop.

The meat and potatoes of the game is really the almost Clue-esque approach to the deduction of the Mastermind’s goals. Each game, the Mastermind will have a different set of goals to achieve, and the game will function differently as such, leading to tremendous replay value. The Protagonists do get a handy little reference sheet containing all of the information they would ever need to win, however, they have to narrow down what information is relevant to this particular script. 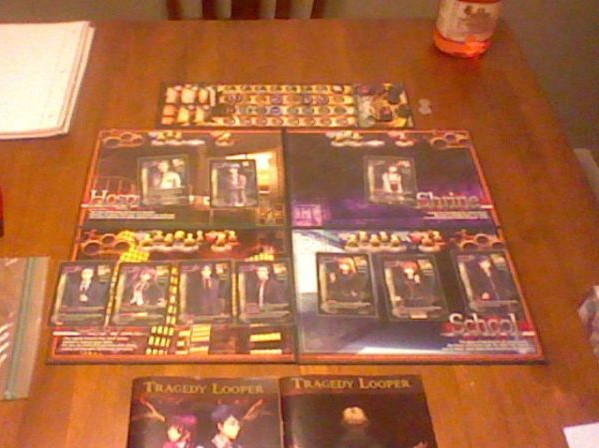 Now, this all sounds like a fantastic idea, and it really is, but how well is it executed? In truth, the execution is somewhat average. For actual materials, the game is your standard fare of a few board pieces, made out of a thick paper material (standard board game board), you have a LOT of cards, made out of about what you would expect. I personally sleeved my copy up immediately to help the cards last, as they get used for pretty much everything. The reference sheets are glossy paper, and the manuals (one for the Protagonists, one for the Mastermind) are average as well. The tokens and counters are a bunch of punch-out circles, so pack a sandwich bag to hold these in.

The graphic style, while kind of neat, is your generic anime style, with some nods thrown to specific anime character types (which I personally choose to believe was intentional). The game itself is dripping with style, and it really makes for a fun experience. The gameplay itself does have a few issues though. 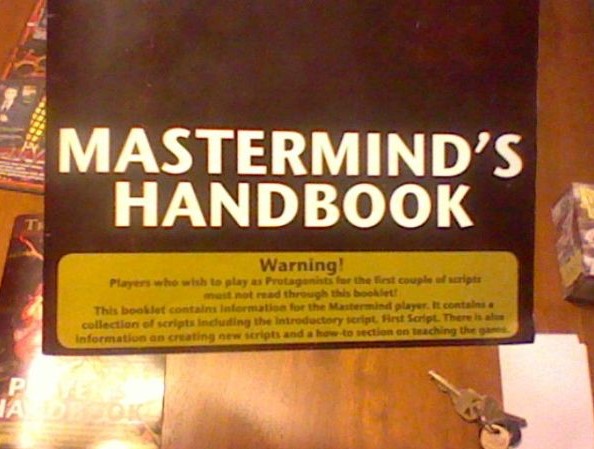 First off, the learning curve is STEEP. We’re talking “toss you off the cliff and see if you fly” steep. Z-Man Games, the company behind Tragedy Looper, does a good job of providing a “quick” (read 20-30 minutes) tutorial to show everyone how a “day” or round would work, providing insight into a number of the finer mechanics. However, it then tosses you into a game, with little to go off of as the Protagonists, and giving the mastermind only one pre-scripted move set for a single game to understand what they are doing. They do provide a beginner’s rule set in the “First Steps” scripts and rules, but you start playing the full game by game 3 (when following the order of the prewritten scripts), which has almost twice as much information to digest as the “First Steps” games.

It just gets crazier from there, and by the 5th or 6th game, it is actually recommended that the Protagonists don’t talk to each other during a loop, but only while they are between loops. This rule is a major fun-killer, and my group has agreed after one game of this that we just won’t use it. Co-op games by definition are about people working together, and if you can’t communicate to do that, it just doesn’t work. It also horribly skews the balance in favor of the already heavily favored Mastermind.

That said, the Mastermind does not get to take it easy. If anything, I would not recommend playing as the Mastermind without at least some DMing experience for a tabletop RPG. You need to be able to single-handedly juggle making sure your win conditions happen, disguising them so the Protagonists don’t figure them out and stop you, and all the while you are the active player, they are reacting to you. Seriously, I’ve never had the mental fortitude to play more than two games in a night, and even then it gets rough in the later scripts, as the most overpowered win conditions come out to play, and the final script is even described as a “top-class hard to control insanity”. While I do enjoy a good hour or so of banging my head against a brick wall (the expected playtime of a single game with a playgroup that moves quickly), I’m not going to use that script without my players being aware that this one is going to require more caffeine and tacos for all. 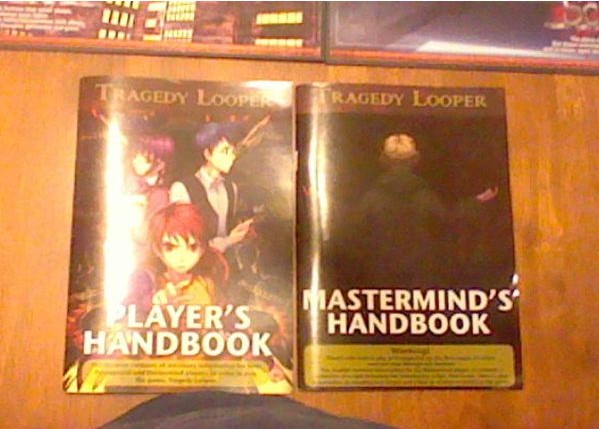 I mentioned the balance earlier, and I will say it is not designed to be a fair game. One player is holding all the answers, and it’s the Protagonists job to pull some teeth. While I relish watching my players struggle, I don’t like seeing them just give up due to how difficult it is, and as the Mastermind, sometimes I do feel like I need  to make a suboptimal play just to give them a chance. This speaks volumes to how hard this game is to win with an experienced Mastermind at the helm, and deserves looking into.

Finally, there are ten pre-written scripts that come with the game, as well as rules for script creation, allowing for hours of fun after you’re done. However, even there the ever-present balance issues remain. It is an actual rule that you can make a script where it is impossible to win a loop, or impossible to guess every character’s role at the end (the extra rule for the protagonists), but not both. This style of thinking leads to fairly degenerate scripts, where the protagonists simply cannot win without guessing everything at the end, or must blindly stumble into a winning loop, unable to deduce who is what and why they won.

For a fun night of intellectual challenges, this game is top-notch, taking one of my favorite concepts and letting me live it out. My playgroup has actually threatened to bar me from coming back unless I bring the game with me. That said, it is not without issues, and hopefully when Z-Man Games decides to translate and release the expansions (and yes, there are expansions), some thought will go into tweaking the balance for a more fun and fair game, rather than it being one player having a power trip.