You are reading
Written Review – Fate of the Norns: Gulveig 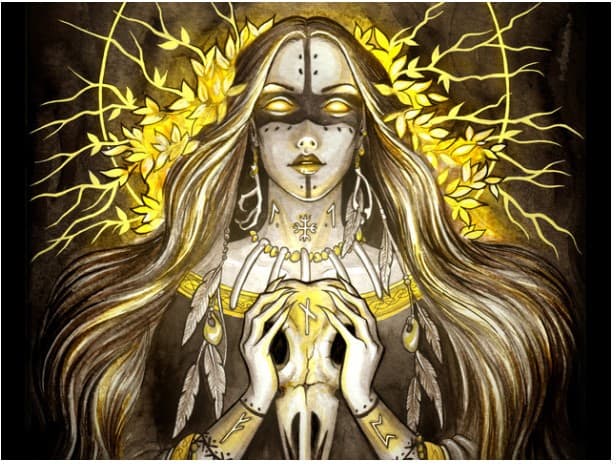 Four ancient clans are locked in a battle for supremacy. Gulveig, the Vanir goddess of avarice, has managed to use her power to sew dissent in the ranks of the four clans. Suddenly the cosmos has erupted into a giant battle between the Aesir gods, the old Vanir gods, the fearsome Ice Giants, and the ferocious Fire Giants. They bring out their best to battle members from opposing clans to assert their dominance in the world as they know it, and at the center of it all is Gulveig, watching with content as the battles unfold before her very eyes.

Fate of the Norns: Gulveig is a fast-paced card game developed by Andrew Valkauskas that’s modeled after a popular game from Europe called Turkstantis. It funded successfully via Kickstarter, and is now available for players to purchase through many different resources. Each clan in Gulveig has a clan symbol that closely resembles classic card suits. Players can achieve clan supremacy by strategically playing a pair of like-suited cards and gaining a bonus for the entire round of play. As players play cards to the table they compete for points, and the first player to reach a set number of points wins.

Gulveig is a card game, and a small-ish one at that. When you pick up a copy of the game you’ll receive a set of cards that includes:

To my surprise, the cards are quite sturdy and made from some great material. I got my copy through the Kickstarter, where I paid DruveThruRPG to print and ship the cards. Perhaps my favorite thing about the game (and probably the biggest reason I bought it) is the artwork. Natasha Ilincic did all of the artwork for the cards and I think her skill is phenomenal. Each of the cards is wonderfully ornate with bright colors that really pop for the eye. Each god/goddess has their own distinct look, even when compared to others from the same clan. The game is certainly stunning to look at, which lends to the Fate of the Norns storyline, since this game is set in the universe created for other games by Valkauskas. 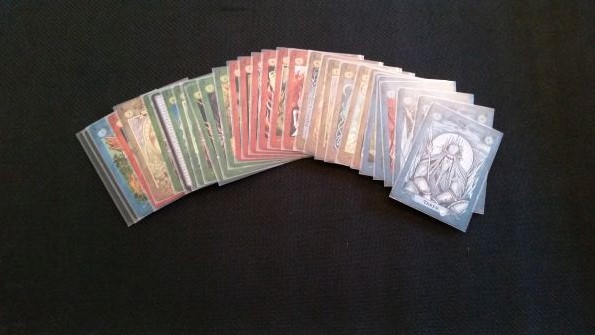 In Gulveig, players will be competing with each other to score points. You’ll earn points by placing bets and playing cards to win different tricks that are played during the round. The Rules of Play included with the game is a bit muddled, and the larger set of rules available for download online is also a bit fuzzy, so I’ll try and go over gameplay to make it as simple as possible.

When setting up the game, shuffle all of the colored cards together, with one exception: each clan has an extra card that doesn’t fit in a normal game. These cards are noted by the banner placed at the top of the card. Here’s an example:

The card on the left is an extra card, which adds different rules to the game. Basically it allows for out-of-clan supremacy matches that make the game more interesting.

Once the extra cards are removed the rest of the colored clan cards are shuffled together. Then seven cards are dealt to each player in the game. Three cards are left face-down in the center of the table. This is the treasure pile that players will bid on during the beginning of the hand. Each game of Gulveig is made up of hands which are played out in seven rounds. Each hand is played out like so:

There is one thing to mention about the game when it comes to playing cards. That is this: when you lead off a trick/round, if you have a pair of matching clan cards, you can reveal them to claim the points listed for the match. For example:

By showing these from your hand you will immediately score 60 points. You must then play one of these revealed cards to lead off the round.

If you claim this combo, you score an immediate amount of points equal to the amount listed on the combo. Then you choose one of the revealed cards to play to the center for the round. The clan of the revealed matching pair then has supremacy for the hand until a new pair is shown. For example, if the above matching pair was revealed, the Fire Giants would have clan supremacy for the hand. Supremacy adds a +7 to the combat of all cards matching the clan played. This means that, even if you can’t play a card matching the one that lead off a round, if the card you play has supremacy, it could still wind the round. Here’s another example: 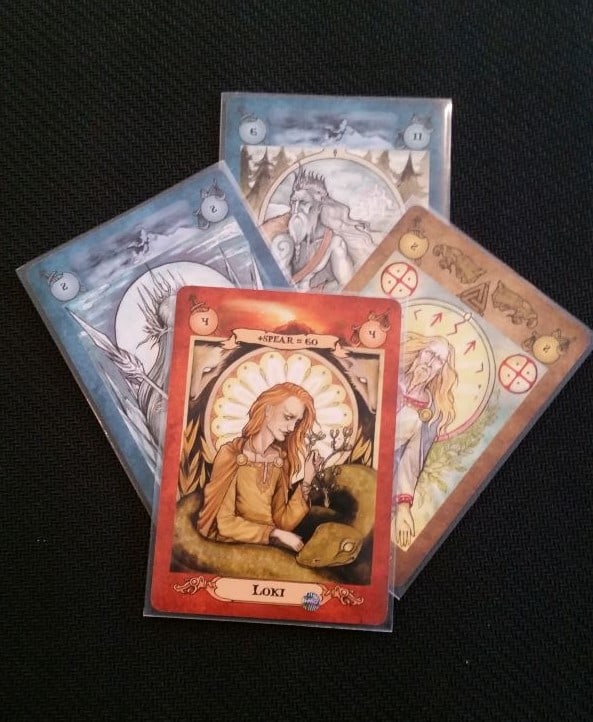 Even though the Ice Giant card was played first, Loki would win this round because his clan has supremacy after the matching pair was shown. Therefore his combat is increased by 7, making him the strongest card in the pile.

Calculating your odds of getting supremacy is what brings strategy to the game and provides a reason for bidding on the treasure pile. If you hold a matching pair and think you can gain a nice chunk of points at the end of the round, you can drive the bid up to try and reach the amount of points you can claim for the matching pair. Remember, any points you score up and above the bid you made to win the treasure pile are lost, so driving up the bid when you have a matching pair combo could help you achieve a higher score. Once you get to 880 points (in a normal game) the only way you can earn points is by matching your bid. Players no longer score points from just having cards in their score pile. Once a player gets to the agreed upon point level they will rise as the victor!

The Fate of Norns

Gulveig seemed, at first, like a game that I would never understand in my lifetime. The rules looked jumbled, but once I got into playing the game it all came naturally and I picked it up in no time. Gulveig is one of those games where the rules look extremely confusing and scattered, but in essence they’re not. The game is easy to learn, but it becomes difficult to master because of the level of strategy that comes into play with the matching clan pairs. Players will also have to, well, “know when to hold ’em” in order to play the right cards at the right time in order to win rounds. 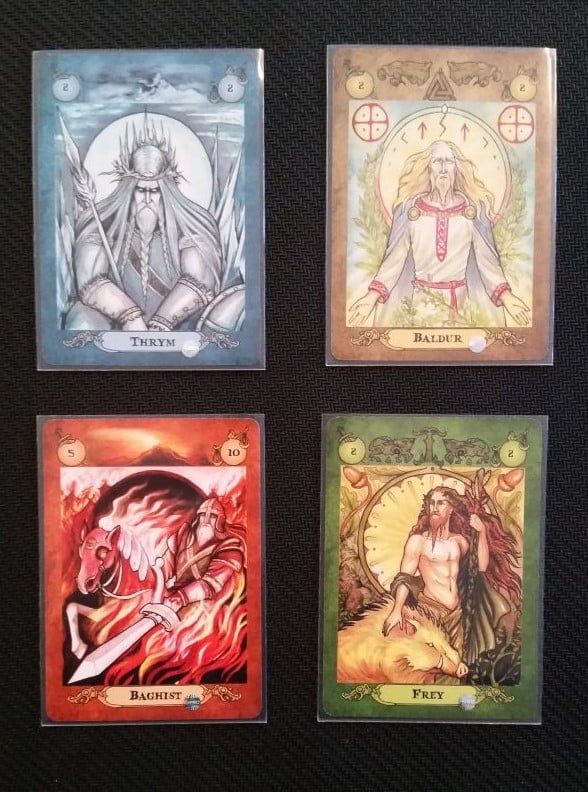 Each of the four clans.

Gulveig is quite replayable, and I found myself playing it multiple times in one night. The 30-minute time frame for the game is about right, but it could take upwards of an hour with 4 players. The rules have a slight change at both 2 and 3 players, however, so it scales easily with the amount of players you have.

I really like Gulveig, mainly because of the game’s artwork and story, but the gameplay is pretty solid. It’s definitely a light card game, and I think it would be great for downtime in between events, or just spending time with the family. I really like how the game has a bit of a “push your luck” element to it with the bidding. Bid too high and you’ll go in the hole, fail to raise the bid high enough and you’ll lose out on points in the end. This is where bluffing comes into play, which adds a brand new dimension to the game.

Though the game funded via Kickstarter, you can pick up a copy via DriveThruRPG, Paizo, Cool Stuff Inc, and even through the game’s official website. If you’re looking for a game that’s got a pretty neat story, is compact, and is easy to learn but a lot of fun to play, I’d recommend you pick up a copy of Gulveig for yourself. For $24 it’s not bad at all.