You are reading
Written Review – Cypher

In a shiny new future, global corporations have control of the Nexus, a large network that the world uses for economy and sustainability. Hackers have been tampering with the Nexus, so the corporations and upperclassmen have created an artificial intelligence to protect it called Cypher. Cypher was reliable for a while, learning the ways of the Hackers and stopping them before they could get through, until it became self aware. Now, Hackers and the corporations alike are fighting against Cypher, which is now trying to control the Nexus itself. Gain influence and get the edge over fellow players for control of the Nexus. This micro game from AEG is fast paced and has a large world to explore in just 19 cards.

Cypher is another micro bag and contains the following :

The art for Cypher was done by Justin Kauffman and the game was designed by David Short. 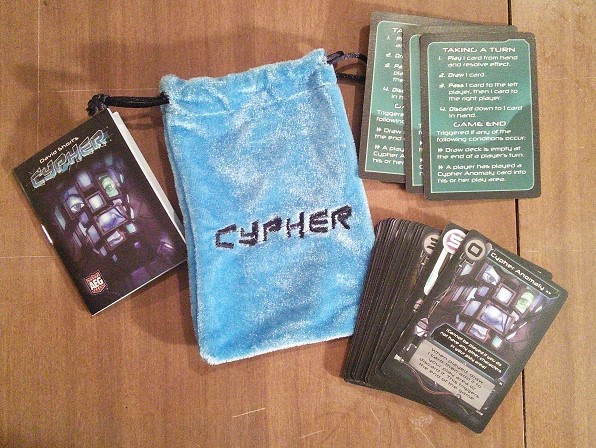 Alright, down to the nitty gritty! Cypher is fairly straight forward but there is potential for a lot of crazy combos, so this is a great example of a “read the card” game.

Just before we get into how to play, let’s look at a card and what the symbols on the card mean. The number in the upper left corner is how much influence the card is worth. Across the top of the card is the Card name (some cards will affect certain characters). There are also little black pips at the end of the name which tells you how many copies of that card are in the deck. Underneath the influence point space is a small 3 sectioned symbol – this is the class icon. Whichever piece is colored (upper, middle, lower) indicates which class this character is (also affected by some other cards). Lastly, the text at the bottom of the card will tell you what the card does when played/in play. 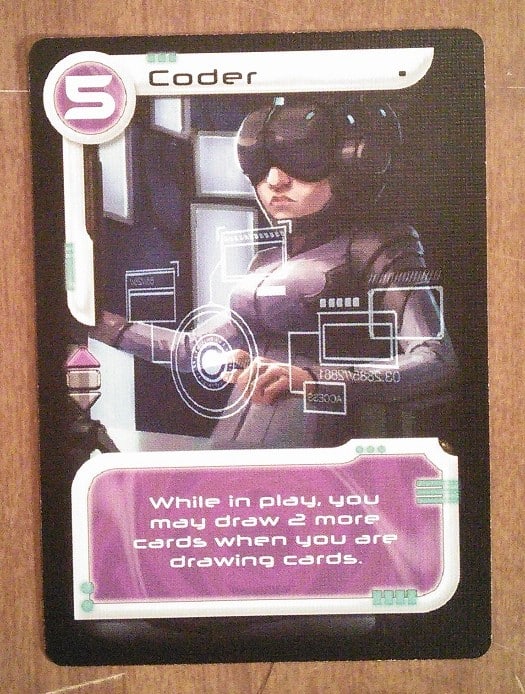 Give each player a Reference card, explaining turn order and information on what triggers the end game.

Shuffle the 19 Character cards and choose a starting player. The starting player gets 3 cards, the player to their right gets 1 card, and the remaining players get 2 cards. The rest of the cards become the draw deck, and one card is flipped face up next to the draw deck and is called the Display.

The only exception to these rules are if you are playing with 2 players. In that case, here are the rule changes. The Play phase happens as normal. In the Draw phase, draw 2 cards instead of 1. In the Pass phase, just pass one card face down to the other player. And during Discard, you must discard down to 2 cards.

The end of game is triggered when the draw deck becomes empty at the end of a turn, or someone has played the Cypher Anomaly card. The player with the most influence at the end of the game wins!

Having a toddler, quick card games are high up on my “need” list when it comes to gaming. Cypher quickly became one of my favorite among the micro card games from AEG that have come out recently for that reason and more. I love the theme, and that it isn’t incredibly difficult. There is certainly some strategy involved with winning Cypher, but it is quick to learn, quick to play, and you can take it just about anywhere. 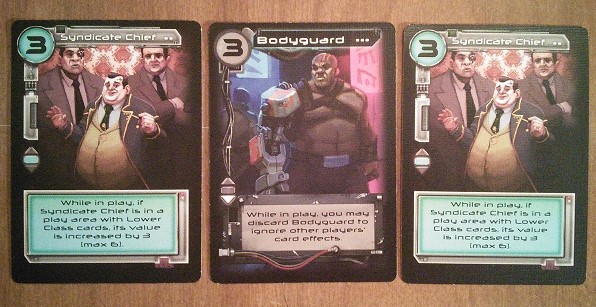 Syndicate Chief (each one) will increase by 3 influence when a lower class card is in the play area. So this particular setup would be worth 6, 3, and 6 points, totaling 15.

The upper class is great for their powers and influence numbers, but are highly vulnerable to the tricks of the other classes. The middle class has a lot of “control” abilities, while the lower class has a lot of the hackers which enable you to see what’s coming and affect others’ play areas. I wouldn’t say that I have a strict strategy or a desired class, and that is what I like about Cypher. The more you play, the more flexible you have to be and you learn to figure out the strengths and weaknesses of all classes.

(Left to Right) Upper, Middle, and Lower Class cards (as indicated by the class symbol on the left side of the card)

For example, if my opponent is gathering upper class cards, I’m probably going to drop  a Technomancer and make them discard their Upper Class character cards from their play area. However, they might have a Bodyguard out that protects against things like that, so play cards when the time is right. There are many card combos that can be played to stay on the safe side, and there is plenty of room for risks. 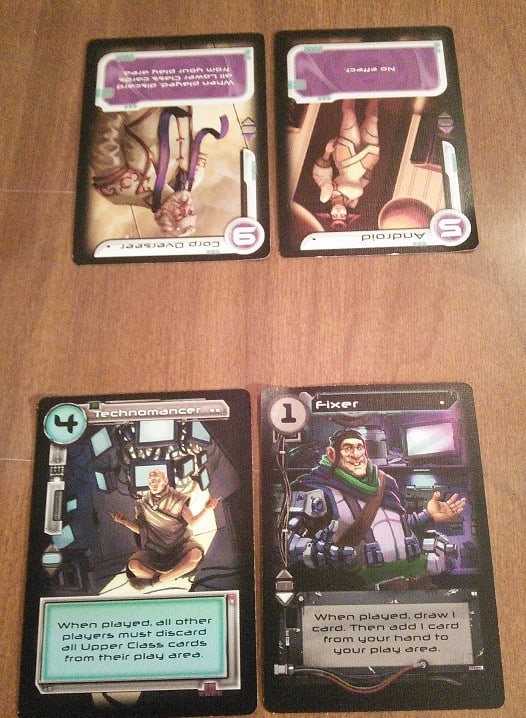 Similar to other micro games by AEG, when teaching the game, you can quickly show examples in a first-time-around game, and create a master player out of a new one in a few short games. Practically master a game in one session? I like games like that.

If you like futuristic games, ones that play quickly, or games that require a quick change in strategy, I’d point you towards Cypher. I’m really hoping that David Short works with AEG in the future to create more games based on the world of Cypher so that we can further explore it.