Talk of the land is that a temple of legend contains artifacts of great worth, and a spell that can grant a kingdom great wealth – something that every adventurer is sure to take interest in. However, entering said temple will require more than a pair of hiking boots and a backpack, as this temple is shrouded with spells and traps (dice rolls) to protect the treasures within. You take on the role of one of six master thieves, known as Spell Stealers, from your kingdom tasked with entering the temple and bringing wealth and fame to your kingdom. The traps inside the temple are just half the battle, though, as your fellow adventurers will try to slip in and steal your artifacts and get closer to the magic spell, so you best act quick. Spell Stealers is a push-your-luck dice adventure game that has just hit Kickstarter and hopes to take you and your family through a fast-paced dungeon crawl that involves all players, even when it isn’t your turn.

We’re calling this piece a [p]review because the game play is already solidified, but some of the components are not final in their design, and we encourage you to watch the Kickstarter for updates as the designs become final.

Spell Stealers comes in a small square box and includes :

The copy that we are [p]reviewing for you is a prototype. Some dice have hand-painted numbers and some have stickers, but the final version that you’ll receive from the Kickstarter will be colored and engraved. We’d also like to note that the game board won’t appear as orange, as well as some other minor adjustments to game components such as the size of the Steal tokens and the box art.

Each of the 3 Artifact dice will have different colored numbers on them. The pyramid die has all green numbers, the diamond has green and yellow, and the orb has green, yellow, and red. The probability of rolling the orb and getting the red numbers (which will give you the most advancement) isn’t high, but that choice is up to the player. They may choose to take the risk of the diamond or orb dice, or you can play it safe and keep with the pyramid which gives you the highest chance of a successful roll.

Is it really that easy? Well, on an ideal turn, yes! This is where the name of the game comes in. While you are taking your turn, other players have the chance to steal the artifacts that you work so hard to earn. However there is a small window of opportunity to do so. From the moment the active player releases the Success die and their Artifact die of choice to the time they remove their hand from the Artifact Point pawn after moving it on the track, other players may try to take the artifact and advance farther into the temple.

Other players will hold their 3 Stealing dice while you’re selecting the Artifact dice you’re going to roll, and when you make your roll and the Artifact dice you chose is revealed, other players may quickly try to roll the same die. If player A rolls the diamond and gets a 4, and player B also rolls a diamond and receives a 6, then a steal has occurred. The stealing player must flip their Steal token to the spent side, and the player that rolls the Stealing die that exceeds the active player’s artifact die gets the movement earned so far by the active player. This means that if player B decides to steal on player A’s second roll (let’s say that their first roll was successful and earned them 4 movement) and succeeds, then player B will get to move their pawn forward 8 spaces. 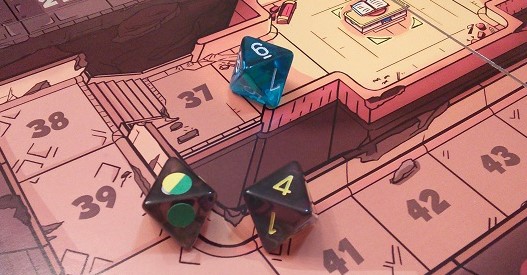 Player A won’t receive Artifact Points for that roll, but can choose to end their turn or push their luck and roll again. In a 2 player game, they would have an open chance for a few rolls at this point since player B’s Steal token is spent!

Let’s say for a moment though, that player A decides to get revenge. Player B rolls the orb and successfully rolls an 8. Player A rolls the Stealing orb and it lands on a 5. The temple punishes player A for their greed in this instance by sending the Stealing player’s pawn backwards by 5, the amount on the Stealing dice. Bummer. 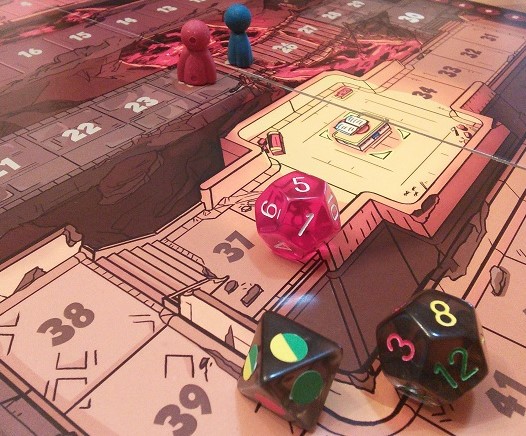 A steal is also considered a fail if a stealing player tries to steal outside the stealing window, someone else has already stolen the roll/artifact in question, used the wrong Stealing die, or the active player’s roll was not successful and a Stealing player rolls anyway. The “punishment” of the temple activates for any failed steal attempts.

When a pawn reaches or exceeds a powerful spell on space 35, that round is considered to be the final round, and is played to completion. The player deepest into the temple wins! An additional round can be played to break a tie.

To Steal Or Not To Steal, That Is The Question!

This is one of the fastest games I’ve had the opportunity to learn in a while. It felt like it took no time to go through the rulebook and pick the game up. Teaching others the game through some example rolls and demonstration was also very fast. Depending on how lucky the players are, we had some 2 player games go as quickly as 8 minutes, but even with a higher player number I’d say that a 20 minute play time is accurate.

Spell Stealers is a great light game that would do well to play in between other games, or for kids who would enjoy a light competitive game. I’ll make a bold declaration that gamers that dislike games that are push-your-luck and progress based on luck and dice rolls probably will get more frustrated with this game than enjoy it. That being said, we only encountered one person who didn’t like the gameplay for that reason.

The choice of dice, and being able to roll dice with purpose, was a great way to improve your run of the mill dice game. I would frequently take a risk and roll a diamond or orb dice initially, and if I succeeded, I’d start returning to the pyramid dice to increase my chance of gaining more ground on the board. This didn’t always work in my favor, though, as I pushed too far a few times and lost what would have been some impressive track progression! 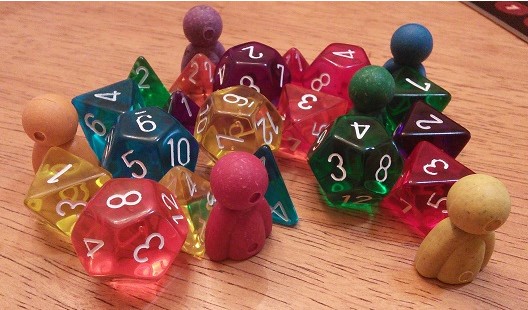 The Stealing mechanic in the game is really the star for me, as it makes for an exciting race and keeps players involved in the game even when their turn has passed. The risk of attempting to steal is certainly something that players must keep in mind because a botched attempt could very well hurt both parties! This happened a few times with us where a steal attempt sent a player all the way to the back of the temple, with the other player nearly crossing the magic spell space.

My favorite thing about this game is that the rules are flexible. This makes the game very versatile and can make it easy for younger kids to get involved. The game is rated for kids 8 and up, and I think that the rule adjustments make this completely reasonable. Some of the ways you can make the game easier for kids including not punishing players for common mistakes such as using the wrong Stealing die, or allowing all players the chance to steal before moving the Artifact Point pawn. This will slow the game down, but when you’re teaching kids about dice games, this can be a great learning curve.

Even though our copy is a prototype, the necessary basics of the game are here and Spell Stealers will certainly stay in our collection and be used for teaching other gamers about probability games and for fun push-your-luck games. It is highly replayable, and with how quickly one can learn the rules, is a game that is ideal for teaching to the masses.

Spell Stealers is fun, and I enjoy how fast it plays, and how quickly one can pick it up. It has been a hit with my family, and I think it’ll be a hit with yours. Spell Stealers is on Kickstarter and you can pledge to get your own copy for $30 for a limited time as an early backer, or $34 if you don’t make it in time. I think the game is worth the price, and there are some fun stretch goals down the line. Spell Stealers will be on Kickstarter until November 24th, 2014, so check out the page and the rules from the page, and watch for updates!