You are reading
Wyrd Releases Card-Driven RPG : Through The Breach 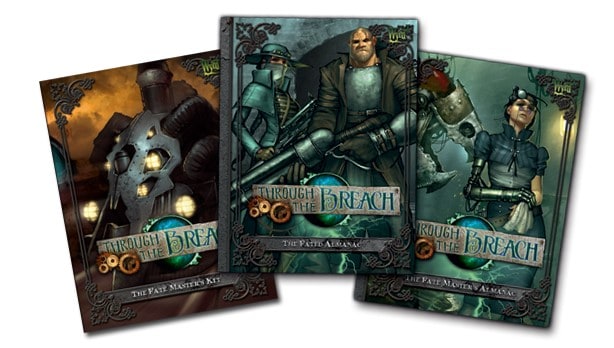 Set in the world of Malifaux, Wyrd Games has been working on a new RPG that twists the world as you currently know it. Through The Breach allows players to create characters such as Dabblers, Drudges, Gunfighters, and Entertainers, and embark into their futures. However, in Through The Breach, all characters are Fated. They know their destiny, but have to survive what is thrown at them to fulfill it.

The Fatemaster can change the world of Malifaux to create the stories that their players will participate in. There is a Fate deck that is used by all players to determine outcomes of events instead of dice. However, each player has their own deck called a Twist deck. These can be used to alter results of a Fate deck card draw. The announcement mentions that the Fatemaster may use the Fate deck as well, but with repercussions. This makes me think that the players may get some kind of advantage if the Fatemaster does so.

There are three books associated with Through the Breach, including The Fated Almanac, The Fate Master’s Almanac, and The Fate Master’s Kit. These books run for $40, $40, and $28 respectively. Will you allow Fate to determine your end, or rebel against what has been told to you and create your own path? Malifaux players, we want to know what you think of this new RPG! Let us know.