You are reading
Written Review – Sheriff of Nottingham

“Just a minute. Robin Hood steals money from my pocket, forcing me to hurt the public, and they love him for it? That’s it, then! Cancel the kitchen scraps for lepers and orphans, no more merciful beheadings, and call off Christmas!” -Sheriff of Nottingham from Robin Hood: Prince of Thieves

Moving your goods to market on a fine spring day? Hoping to make a little extra on the side from some slightly illicit mead? You’ll have to deal with the Sheriff of Nottingham before you get to market. “Are you an honest merchant or one of those scoundrels trying to thwart King John’s dictates?” he asks.  Will he let you pass unmolested? Inspect your goods? Perhaps a little gold will grease the wheels of the bureaucracy? While you were trying to decide the merchant behind you in line offered the Sheriff 10 gold to inspect your goods and let him pass by!  “Let’s have a look at your wares!” the Sheriff shouts. And so begins a game of Sheriff of Nottingham.

Sheriff of Nottingham comes with the following components:

Sheriff of Nottingham has fantastic components, particularly the merchant bags. 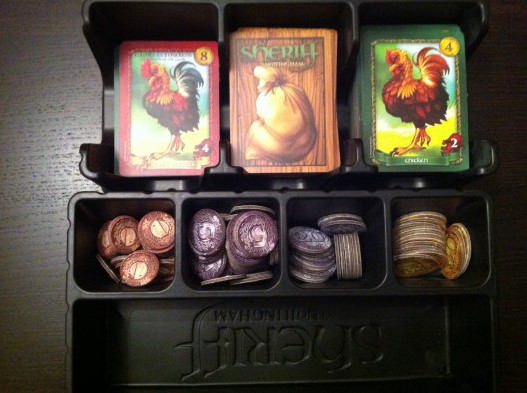 The inserts are also well designed and can be used during the game. The cardboard coins are quite well done.

Gameplay in Sheriff of Nottingham is relatively simple and straight forward. The goal of the game is to be the player with the most gold at the end of the game. Players do this by selecting goods (represented on the cards) and placing them in their merchant bag and getting them to market. There are four legal goods: chesse, bread, apples, and chickens. There are also a large number of illicit goods such as pepper, crossbows, maps, ale, and a number of others. Each good is worth a certain number of gold pieces. Illicit goods are worth more than legal goods but come with a large amount of risk. There are also bonuses at the end of the game for the player with the highest number of legal goods. Each player begins the game with 25 gold.

1 legal chicken and two illegal goods, mead and pepper. Notice how the card background indicates whether a card is legal or not. (Red for illegal, green for legal)

Each player is initially dealt a hand of six cards. In turn order players may exchange those cards by discarding them and declaring what they are discarding and placing them face-up in a discard pile. They then draw back up by taking cards from the draw pile (which is always face down) or by taking cards from the discard pile (which are face up). They player who is the Sheriff this turn does not go through the discard process. Once all players have six cards the turn may begin.

A turn of Sheriff of Nottingham consists of one player being the Sheriff and the other players packing their merchant bags. Players may place any cards (up to 5) they wish in their bag. Once they snap their bag shut they may not change the contents of their bag. Each player then must declare the amount of goods(cards) in their bag (players must tell the truth about the total numbers of goods in their bag) and must declare their bag to contain one legal type of good. The player who is the Sheriff then asks them to declare their goods and must decide whether to investigate the contents of their bag. Players may bargain with the Sheriff to open or not open their bag, other players are also welcome to barter with the Sheriff regarding a particular bag. As a rule of thumb, any agreements made regarding the current round are binding while agreements or promises of future actions are not.

Sheriff: “What do you all have in your bags?”

Player 1: “I have 3 cheese Sheriff” (telling the truth)

Player 3: “I have 2 chickens Sheriff” (lying the bag contains 2 pepper)

Player 4: “I have 4 bread Sheriff” (telling the truth)

The Sheriff then has to decide whether or not to inspect any of the bags and players may make offers to convince the Sheriff one way or another. “Would a healthy contribution to the Sheriff’s Retirement Fund allow an honest merchant like myself through unscathed?” “I’ll give you 10 gold to look into that bag Sheriff.” “Why would you doubt an honest merchant like myself Sheriff?” are things you might hear while they Sheriff is deciding which bags to open. Once the Sheriff snaps open a bag, the contents must be inspected. If they player was lying all their contraband is confiscated and they must pay the Sheriff a penalty for their illicit goods. If the Sheriff inspects a bag and the merchant was honest they must pay the merchant a penalty for wasting the good honest merchant’s time. The Sheriff may also decline to inspect a bag if they choose (or if that contribution to their retirement fund was sufficient). Once all goods are inspected or passed through players take their goods and display them on their merchant board. Legal goods are placed face-up and illicit goods are placed face-down. This lets all the players see who was telling the truth and who was bluffing that round. Play then proceeds with the next player being the Sheriff. Once everyone has been the Sheriff a certain number of times (based on player count) the game ends and the player with the most gold wins!

Player 1 is an honest merchant, if the Sheriff inspects their bag the Sheriff will have to pay them 6 gold!

Player 3 is not an honest merchant. Those are not chickens. If the Sheriff opens their bag they’ll have to pay 8 gold to the Sheriff. But if they sneak them through the pepper is worth more than any legal good!

Lying for Fun and Profit

A final merchant board in Sheriff of Nottingham. If you have the most gold overall (Including goods, gold, and bonuses) you’re the winner!

Sheriff of Nottingham has proven to be an excellent game for our gaming groups. The bluffing, cajoling, and freestyle wheeling and dealing with the Sheriff has led to a lot of hilarity (and lots of bad jokes). This is a “beer and pretzels” style game. Light, fun and an excellent opener for a game night. Looking the Sheriff in the face and boldly stating, “Of course I have 5 chickens in this bag! Can’t you hear the clucking?” is a lot of fun. By letting all players participate in the negotiations for a particular bag (I’m not 100% clear that this is the ‘official’ way to play but the groups I played with found it more fun this way) everyone is always engaged in the game and there is very little down time. The only caveat to this game would be that final scoring can take a couple of extra minutes due to bonuses, counting twice, etc. but we found this a very minor flaw in an otherwise excellent game. If you’re looking for a light opener or a new gateway game to show your friends how much fun hobby gaming can be you should definitely venture into Sherwood Forest and find the Sheriff of Nottingham!