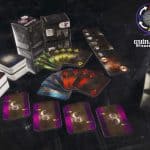 You are reading
Quintessence – The Card Game of Elements, Now on Kickstarter

The elements. They are basic, make up our very existence, and in most tabletop games they play a huge role. The elements I’m referring to, of course, are the five elements of natural philosophy: Air, Fire, Earth, Wind, and Water. You’ve no doubt played at least one game where you have to manage the elements in order to achieve a goal, but have you ever had to use them to attack or defend yourself? That’s the premise with Quintessence – The Game.

Quintessence is a card game developed by Francois-Maxime Ayotte and it’s currently undergoing a campaign on Kickstarter. The game is simple enough, and plays with 2-5 players. In the game you have two decks of cards: the elements deck and the actions deck. Players will use elements (the ones we just talked about: Air, Fire, Earth Wind, Water, and a special element called Ether) to create a defensive barrier for themselves all while using action cards to attack opponent’s defenses with those same elements. When a player loses their last element as a line of defense they are eliminated from the game.

Each element card has a type and value. For example, each element card will have their type at the top and bottom, followed by a number of pips. These pips represent the strength of the card. Each element has a weakness (shown by the game’s logo – go figure) that can beat it if used to attack. If I place a water element card down for a defensive barrier with a power of three, an opponent could attack that barrier with an air element card with the power of four and destroy it. Sometimes you can attack opponent’s barriers with superior elements of the same power, and a duel will occur.

Action cards help keep the game interesting by allowing players to draw cards, steal from their opponents, and more. As a small card game that can play from 20-60 minutes, it can be learned quickly. Many backers on the Kickstarter campaign have commented that the game would be ideal to carry around for quick pick-up games, and I’m inclined to agree. I think the game would be great for packing around to dinners out on the town to play while you’re waiting for your food to arrive.

The artwork looks great, the gameplay seems solid, and overall Quintessence seems like a quick game that nearly anyone can learn. For about $28 you can get yourself a fully copy of the game, which seems a bit expensive, though the gameplay looks to justify the price if you’re busting it out a lot. On top of that, the game is available for up to 5 players right out of the box, which eases the hurt on the wallet. If you’re looking for a modern card game with a twist on some old knowledge, check out Quintessence before the Kickstarter ends.