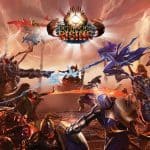 You are reading
Demigods Rising Coming Back to Kickstarter, Looking for Feedback on Preview Page

Back in March we posted about a new board game that was up on Kickstarter called Demigods Rising. For the first time in board games, Demigods Rising was set to offer players a MOBA (Multiplayer Online Battle Arena) experience right on the tabletop. For those who aren’t familiar with MOBA games, they’re popular on PC, with examples being League of Legends, Heroes of Newerth, and DotA 2. As a fan of this genre, I was excited to hear about the prospect of getting such an experience right on my tabletop in the office.

After earning quite a bit of funding, the campaign was suddenly canceled. The reason? According to the developers the game needed more polish before they felt it was sufficient to put into player hands. The developers also said that other Kickstarter campaigns were simply better, and they were losing backers to them. While that rubbed me the wrong way, I decided to wait it out and put some trust in the developers to polish the game up for a re-emergence.

That time is now, as the developers have announced that Demigods Rising will be coming back to Kickstarter very soon. In fact, they’re asking for feedback on the campaign’s preview page, which you can see now. From what’s there, I can say that I’m still excited for what the game offers. The miniatures look great, and it looks like the developers have made the game look much more playable than before. Make sure you check out the preview page, and get ready for Demigods Rising to blast back to Kickstarter very soon!