You are reading
Written Review – Lords of Waterdeep : Scoundrels of Skullport

In Lords of Waterdeep, you take on the role of a Lord trying to gain control and influence over the city of Waterdeep through various strategies. Maybe you want to be the richest, complete the most quests, or whatever strength your Lord has. In 2013, Wizards of the Coast took Lords of Waterdeep further by introducing the Scoundrels of Skullport. In this expansion, players venture into Undermountain and Skullport, additional board locations that give substantial rewards for placing Agents to, but may come with a drawback. In this review we’ll look at what comes with this expansion and what it adds to the game.

Wizards of the Coast

Scoundrels of Skullport comes in a box that is nearly the same size as the Lords of Waterdeep core game. Inside is an organization system to put all of your tokens and cards into for easy access. Included with this set is :

That is a lot of stuff for a game expansion! This is no small addition to your core Lords of Waterdeep game. 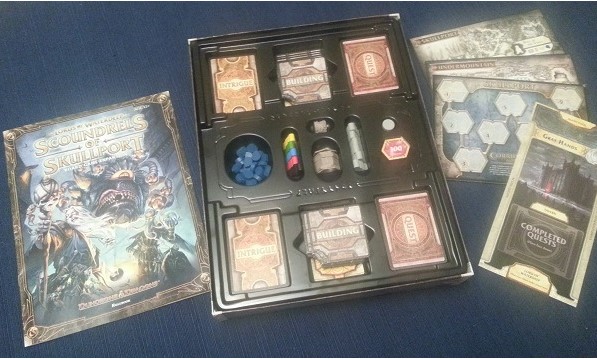 What’s New And How Does It Affect Gameplay

New things you’ll find in this expansion include new locations and a full set of tokens needed for the new player mat, the Gray Hands. The Gray Hands are a special force of adventurers that answer to the Lords of Waterdeep themselves. Also, there are new tokens, called Adventurer Caravans, that players can take into their Tavern when they reach 5 of any kind of Adventurer. 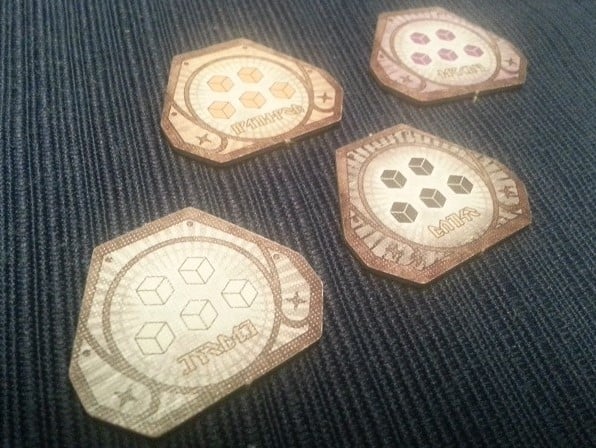 Two new game boards join the ranks as well. Whatever expansion board you decide to use, use the specified cards and shuffle them into the like cards of the core set. The new Intrigue cards with the base’s, and the same with the buildings and Quest cards. Each of the new boards’ cards have small symbols on them to distinguish them as their own set. 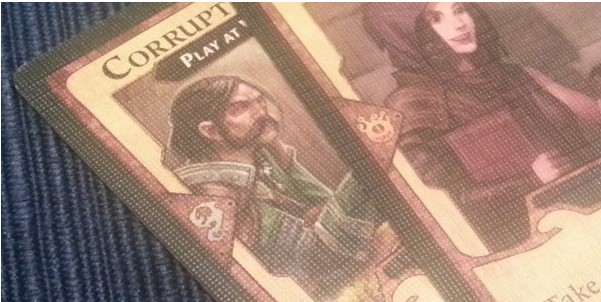 The left is the symbol for Skullport, and the right for Undermountain : these symbols appear on Intrigue, Quest, and Building tiles. 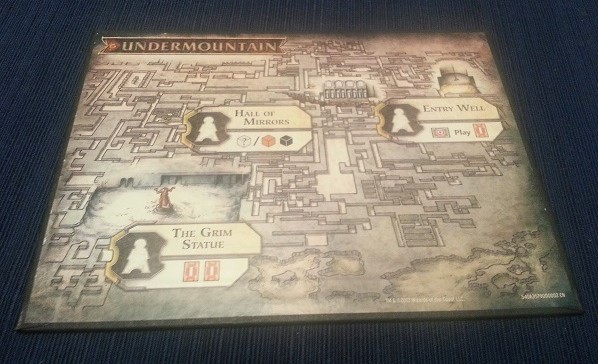 The detailed part of the expansion, though, lies in the Skullport boards. One board contains locations which carry hefty rewards, but things that sound that good always come with a price. Enter, the Corruption Track! This board contains small pools of corruption tokens : one on the first location (-1), and 3 on the remaining pools. When you collect corruption tokens for any reason (this can be through a quest, placing Agents in particular locations, and Intrigue cards), you take tokens from the pool with the lowest number. If any action instructs a corruption token to be removed from the game, they are placed back in the game box. 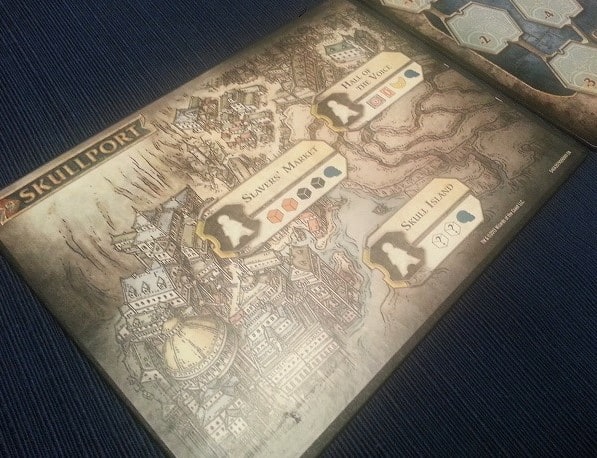 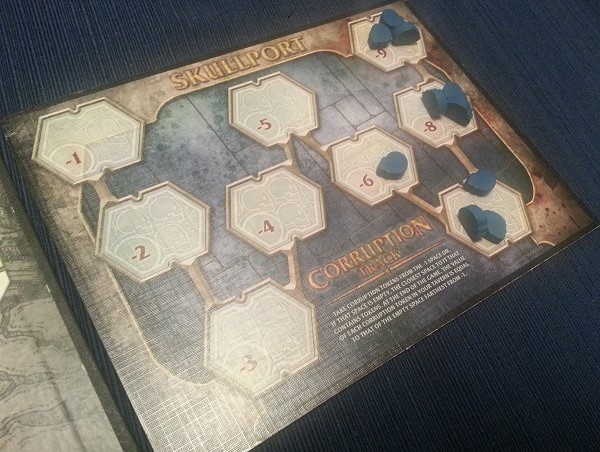 The -5 pool is the farthest empty pool, which means that as of this point in the game, each player with corruption tokens would take -5 VP per token in their tavern.

There are new buildings, Intrigue cards, and Quest cards that bring new features to the game depending on which mode you play in. In addition, there are new Lords for various game modes, each with their own strengths. For example, in the Undermountain game, you have Lords that gain victory points at the end of the game for controlling Undermountain specific buildings, completing non-mandatory quests, and extra points for Quests completed that awarded at least 10 VP. The Lords for Skullport can reduce the penalty taken by corruption tokens, give you bonuses for completing non-mandatory quests, or gain VP for one specific Quest type.

I’ve been a fan of Lords of Waterdeep since the first time I played it, so I was very intrigued when I first heard of this expansion. In our first game, we simply played the Undermountain board, as the biggest changes were additional Intrigue cards, Quest cards, and Buildings. I didn’t find it to be terribly difficult compared to the base game. I did enjoy seeing some new Quests and abilities through Intrigue, as well as some additional location benefits, but didn’t feel like this particular board added a significant benefit to the game. If hording adventurers is your thing, this mode might entice you, as you’re likely to frequently use the Adventurer Caravan tokens! 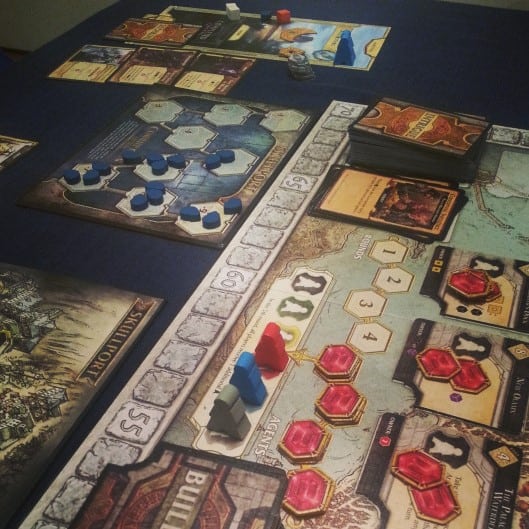 The Skullport board, however, I feel is where the heart of the expansion lies. This isn’t surprising, considering that the expansion is named for it. Introducing the corruption tokens and track to the game, it becomes a game of balancing dishing out corruption, but it comes with the cost of taking negative points at the end of the game. These modifiers on final score can drastically change the outcome of a game. In one game that we played, I had the Lord that allows me to gain 4 victory points per corruption token. This Lord greatly helped my end score by not causing me to lose as many VP as I would’ve normally, but I lost the game despite my previous lead. Had I had one less corruption token in my tavern, I could’ve won.

I think that this expansion really does add a lot to the game, and the addition of The Gray Hands, allows more players. At $39.99, I feel that Scoundrels of Skullport is worth the buy if you are an avid Lords of Waterdeep player. This expansion takes the game to a new level of thinking ahead and your results may not be as you expect, but you can learn from them after a game or two and develop new approaches!