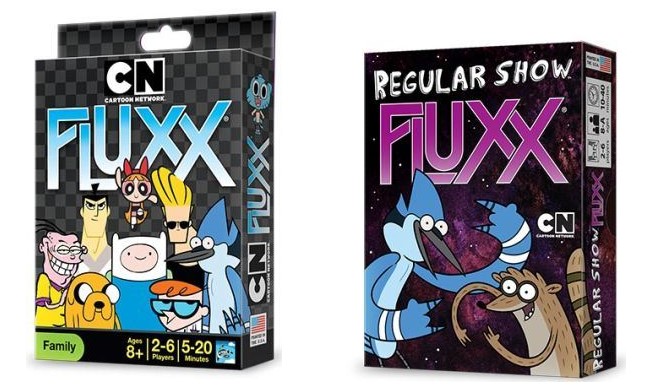 Looney Labs has come together with Cartoon Network to release two brand new Fluxx games: Cartoon Network and Regular Show Fluxx. The games will debut this July at Comic-Con International, and will be available later this summer. The great gameplay of Fluxx meets some of the best cartoons on television in these two new iterations of the award-winning card game.

Regular Show Fluxx highlights the show’s two main characters: a bluejay named Mordecai and a raccoon named Rigby. These two are the best of friends and work as groundskeepers at a local park. Their attempts to slack off and get out of work often lead to them having many misadventures. Cartoon Network Fluxx highlights all of the great characters from some of the most beloved cartoons shown on the channel. Characters like the Powerpuff Girls, Samurai Jack, Johnny Bravo, and the Eds will be seen.

The gameplay of Fluxx will continue to amaze, only this time we’ll get to take even more favored characters on the gaming journey with us. Regular Show Fluxx will retail for $20 while the Cartoon Network Fluxx will come in at $12. Look forward to both of these games hitting store shelves later this summer!