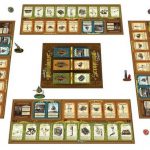 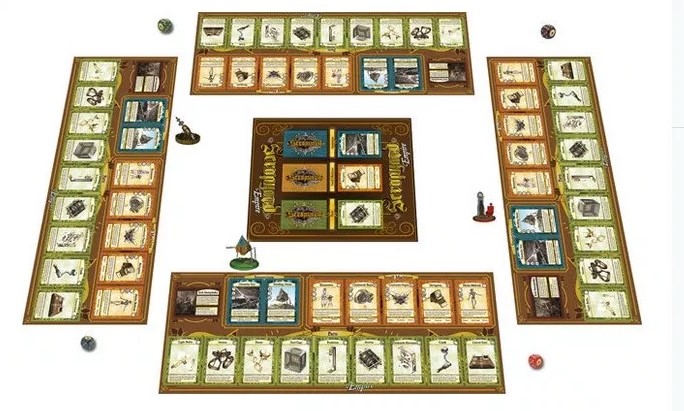 One of the things I like the most about all things steampunk is the chance to see all the crazy inventions people come up with for the time period. I’ve seen steampunk computers, all sorts of weapons, crazy gadgets, and more. It’s really fun to let your creativity fly when it comes to this genre, and at the heart of it all, creativity is what it’s all about. That’s why, when I first heard of Scrapyard Empire, I was certainly intrigued. Scrapyard Empire is a strategic card game produced by Galliant Games, and it’s all about using your creativity to build small machines and eventually inventions, becoming the most famous inventor in the land! The game is now on Kickstarter, so here’s a preview and review all in one!

The version of the game we received for the review was a prototype, but since the Kickstarter has gone live Galliant Games has posted what will come in the standard edition:

Building the Blueprints – How to Play

Scrapyard Empire is a strategic card game, which is to say that it’s not a deck builder or TCG. During the game players will be handed blueprints for Inventions. Each Invention is made up of Small Machines, which are made up of Parts. The goal of the game is to be the first player to build two Inventions and take the claim and prestige of being the master inventor! We’ll get into the actual building of Inventions here in a bit, for now let’s start with setting up the game.

Each card type has its own color and description.

When setting up Scrapyard Empire the first thing you need to do is separate all of the cards into their corresponding color piles:

Players place their parts face up in front of them. This will create a build area where players can manage their parts when building Small Machines and Inventions. Small Machines are held in your hand, kept secret from other players, as is the same with your Invention card. Now that you’re setup, it’s time to get playing!

Here’s the setup area using the Deluxe Edition with miniatures and playmats.

The player to the left of the dealer starts the game. Each player takes a turn which is made up of 4 phases:

Parts have a description and ate the building blocks for Small Machines.

In the action phase players can choose to perform 2 actions, repeating the same if they wish:

Each Small Machine lists the Parts needed to build it, though the icons on the side can be misleading!

If a player has more than 8 Part cards or 5 Small Machine cards at the end of their turn they must discard to 8 and 5 respectively.

Gameplay will continue through players taking turns until one player has built 2 Inventions, at which time they immediately become the winner! There are a couple more things to note about Scrapyard Empire’s gameplay, however, before we conclude.

Inventions are like Small Machines, listing what’s needed to build them, though they have no special ability.

First of all there are Character abilities. Each Character has an ability printed on their card that can help you in a bind. Some abilities are always active, some can be activated once per turn, and others have a limited amount of times they can be used per game. These abilities can really turn the tide of the game, and this is also where a lot of strategy comes into play, as you never know which Character you’ll get.

Finally, whenever you roll the die for any reason you can increase the amount of the roll by scrapping Parts. For each Part you send to the scrap pile you add 1 to the amount rolled on the die. This can come in handy when you need to Dig for a part or Steal from someone.

Are All the Parts in the Right Place?

Scrapyard Empire, even in prototype form, is tons of fun. It’s easy to learn, hard to master, and enjoyable at any player level. There’s just something fun about feeling like a mad scientist trying to build crazy contraptions that keeps the excitement going in the game. There’s enough strategy here to keep hardcore players intrigued, but newer players and even general fans of steampunk will have a great time playing the game.

The Character abilities keep the game interesting, and the random dealing helps keep replayability high. Using the abilities can turn a bad game into a success or at least potentially ruin the day of an opponent. Speaking of ruining opponents, the ability to Steal from other players offers a bit of backstabbing that some players will no doubt enjoy. There’s nothing quite like stealing away a core piece of someone’s Invention or Small Machine right when they’re ahead in the game.

The die rolling mechanic also adds a bit of luck to the game, but it doesn’t rely on it. You can cheat your own fate by scrapping Parts, again adding some strategy to what you’re doing. Some Characters are better at Digging, while others rely on Stealing to get what they need. Using your resources wisely will ensure a victory for your maddened brain!

Character cards have some fluff along with a special ability that’s unique to them.

The game plays rather quick too, which is great. In two hours you can get in 3+ games if you don’t have to teach new players. Even when teaching the game to new players, though, it’s not rough. The game is simple enough to learn, and addicting enough to keep you wanting to play to try and master it.

The Kickstarter campaign offers up some sweet add-ons to the game, such as miniatures and player mats, which I believe are definitely worth checking out. If you’re into strategic games but not necessarily a fan of deck builders, Scrapyard Empire is definitely worth your time. The game keeps the pressure up, has high replayability, and will even let you take creation into your own hands once it releases in full. This is something every steampunk fan needs on their airship!