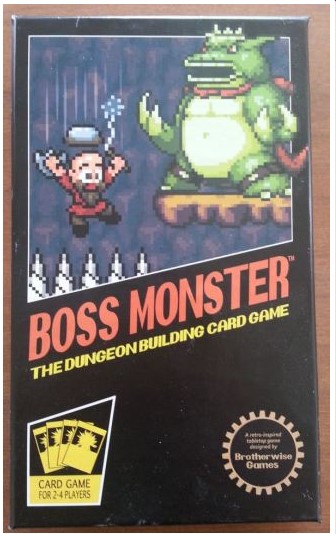 Some of my earliest memories in gaming take me back to fighting Mother Brain in Metroid and Super Metroid. I remember all of the bosses from Super Metroid specifically, including Kraid, Phantoon, and the rest. Even lately I can think of games like Thunderstone, where the players (characters in essence) all fight together to bring down the big bad Thunderstone Bearers. No matter what medium – tabletop or digital – when it comes to gaming there seems to be a pattern that emerges in the themes of different games: there’s always a big bad dude that needs to be taken down in the end to save the world. That is the complete concept of Boss Monster from Brotherwise Games, only the usual role is reversed – instead of playing the dutiful hero you instead take the role of the big bad boss monster and work to build a side-scrolling dungeon to lay waste to any mortal that dare set foot within!

Boss Monster is a somewhat small card game, so the only things inside the box are packages of cards! There are 155 cards in all, but here’s how they breakdown:

A revised version of the game was released (which is what we have), and it also includes some new quick start rules along with the rulebook as well as bigger text on the cards, but it’s otherwise the same as previous versions of the game.

Building Your Dungeon – How to Play

Boss Monster is a dungeon-building card game for 2-4 players. In it you play as, well, a Boss Monster that, through gameplay, works to build the most dangerous dungeon to destroy the Heroes that attempt to traverse through it. When Heroes die in your dungeon you’ll earn souls, and the first player to 10 souls is the winner. Normal Heroes are worth 1 soul each, but once they’ve been expended you’ll have to face Epic Heroes which are worth 2 souls each, but they’re much harder to defeat!

During setup each player is dealt randomly one Boss card. Each Boss has different statistics which have different effects during gameplay. Your Boss card gets placed to the right of your play area, and you will build your dungeon to the left of your Boss. See? It’s just like the old side-scrolling dungeon crawler games where you have to fight through the dungeon to make it to the boss at the end!

The Hero and Epic Hero decks are assembled differently according to how many players you have, and they’re placed to left of the play area. Then each player draws 5 Room cards and 2 Spell cards and discards 2 cards. This will leave you with a hand of 5 cards with which you’ll start the game.

Setup for a 2-player game.

Before each player takes a turn they can build their first room. This is where your Boss’ statistics come in handy. Each Boss has an amount of XP listed on the lower-left corner of their card. Players will choose which room they wish to build and place their cards face down in front of them. Then, starting with the player whose Boss has the most XP, the rooms are built next to their Boss card.

Rooms come in two different types: Monster and Trap. Monster rooms usually have creatures in them that will damage Heroes as they pass through, while Trap rooms deal less damage, but usually have some sort of effect on them. Each Room card also has a certain type of loot listed on it, in the bottom-right corner. This loot will attract Heroes matching their loot type. The types of loot and their corresponding Hero types are:

Loot comes in handy for luring Heroes, which we’ll talk about in a bit. Some rooms also have a “When you build this room” effect that can trigger, well, when the room is built! These effects are resolved immediately after the room is built starting with the player whose Boss has the highest XP. Now that we’ve gone over a bit of the cards, let’s take a look at how gameplay progresses in Boss Monster.

During the game each player takes turns which are made up of different phases. These phases are:

During the beginning of the turn, all Heroes are revealed in town. One Hero per player is flipped over from the Hero deck and hangs out in a play area designated as the town. This is where the Heroes will sit when not adventuring. Then each player draws a card from the Room deck.

Each player may build one room, taking turns in XP order, onto their dungeon. Rooms are always built to the left of your existing rooms, though your dungeon may only contain 5 rooms total. When building rooms you may build Advanced rooms over standard rooms of the same type by simply placing the cards over top of one another. You may, for any reason, decide you no longer want a room in your dungeon. When this happens you simply build over it by placing a new room over top of the card you no longer want.

During the build phase rooms are placed face down in front of the players and revealed simultaneously, with highest XP building first. “When building this room” effects may also take place during this phase.

This is where the loot from your dungeon rooms comes in handy. During the bait phase Heroes move to the entrance (the left-most room) of the dungeon with the highest number of treasure icons corresponding to their class. For example, if I have a dungeon with four rooms, three of them showing a book while my opponent has a three room dungeon only showing one book, any Mages in town will be lured to my dungeon because I’ve more treasure that they seek. If treasure values between the players are tied, the corresponding Heroes just stay in town.

Each Hero has a class and loot type it’s attracted to. Normal Heroes grant one soul while Epic Heroes grant two!

During the adventure phase Heroes travel through dungeons. Each Hero moves through your dungeon one room at a time, taking damage that’s printed at the bottom-left of the Room card. Each Hero has a health total printed on the bottom-right of their card. The goal is to get the Hero’s health to drop to zero before they reach your Boss card. If the Hero dies in your dungeon you place their card face-down in your score area. If the Hero makes it to your Boss card without dying, however, they cause wounds to you, and you place their card face up in your score area. If you end your turn with 5 or more wounds you lose the game!

In this example, the Hero will die before reaching the boss which will earn this player a soul!

The turn ends, all effects go away, and wounds are checked. A new turn begins.

Here the Hero survived and caused a wound to this player!

Strategy plays a key role in Boss Monster. You will need to build your dungeon carefully so that it not only attracts the correct type of Heroes, but also that it’s capable of killing them before they reach your Boss card! Once you build your fifth room onto your dungeon your Boss’ Level-Up ability triggers. Each Boss’ ability is different, which adds even more variety to the game.

Spell cards will also help change the tide of gameplay, as some send Heroes back to the start of dungeons, while others blow up your opponent’s rooms or even switch them around! Spell cards can either be played during the build phase or the adventure phase, and it shows on the card as either a hammer or axe respectively. Players will continue taking turns until either all Bosses are wounded out or someone gets to 10 souls! 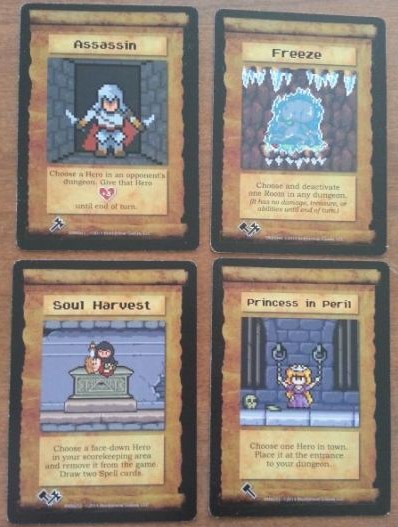 Spell cards provide many ways to change the game.

A Hero’s Death, A Boss’ Verdict

I’ve been trying to get a hold of Boss Monster ever since it released commercially. The game originally funded via Kickstarter and I unfortunately missed out. It made it onto retail shelves, but it’s one of those sold-out-everywhere-as-soon-as-it-comes-in type of games. But after I’ve finally got my hands on a copy for myself, I can see why!

Boss Monster does an amazing job of putting forth a game that takes a bit of strategy to master, but is fun no matter how you play it. With Boss cards being dealt randomly you never know what your strategy will be. Some Bosses favor specific classes, while others have Level-Up abilities that can turn a losing game into a smashing victory. The Spell cards help change up the gameplay, but they have to be used at the right time. Popping a spell too early can leave you hanging in the end, but holding on to a spell for too long can see you wasting the opportunity to pull ahead. 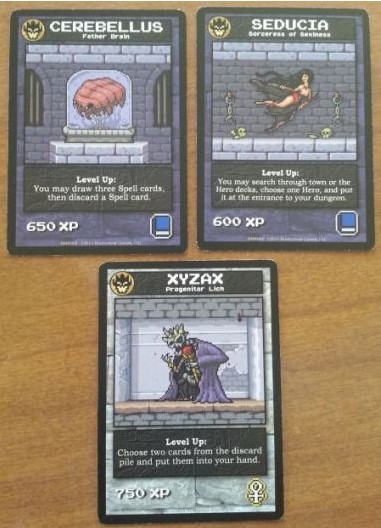 A handful of Bosses!

There’s plenty of replayability to Boss Monster, and it makes for a perfect game night opener. Of course with card games such as this, the more you play the more experiences you have, so at some point you’ll have played all the bosses, built all the rooms, and so forth. Even still, the game remains fun through and through. It’s a great game for families, especially those who are into retro-style games and art.

Speaking of the artwork, it’s fantastic! As a fan of games back in the NES/SNES days, the artwork of Boss Monster hits home in my heart. The cards are all colorful, and each one has a bit of humor to it. They provide an authentic, old-school, dungeon crawling experience right on your tabletop with your friends.

The only drawback I’d say that Boss Monster has is that I’d like to see more Boss cards. Since the game has released we’ve gotten an expansion that makes the Heroes even more difficult to defeat, but what I want is an expansion of big bad Boss cards! Still, the game remains fun even with playing the same Bosses every once in a while, and this is just my nagging side talking. Boss Monster is still a great game, and if you can find a copy I highly suggest you grab it!