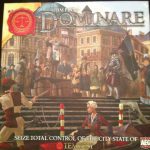 You are reading
Written Review – Dominare

“”While you here do snoring lie,
Open-eyed conspiracy
His time doth take”

Why is the bishop talking to that senator? Is that Princess Annette? Why is she conferring with a mere merchant? Why is that artist staring at me? Does he know of our plans? Are these others working together against us? Conspiracies are everywhere in Dominare from Alderac Entertainment Group (AEG). Will your conspiracy gain enough influence to gain control of the city-state of Tempest or will you be outmaneuvered by another?

Dominare comes with the following components:

The city-state of Tempest in its pre-conspiracy state.

The goal of Dominare is to have the most control over the city-state of Tempest when the game ends. Tempest is divided into several districts such as the Merchant Quarter, the Senate, etc. and each district is made up of individual blocks. Players place influence (represented by wooden cubes of their color) to try and gain control of these areas. Points are awarded at the end of the game for controlling certain blocks and points are also awarded to the player who controls each district.

To control blocks and districts, players use their conspiracy which is made up of several ‘agents’.  In Dominare, each player has a hand of ‘agent’ cards which represent potential members of their conspiracy. Each agent card lists the information for that  agent such as traits, which faction they belong to (which determines where they may place influence), how much influence they may place, how much income they generate each turn and how much exposure they bring to the conspiracy. Each agent also has one or two specific actions they may take if they are played in a certain season.

Exposure is an important element of the game as more powerful agents generally have higher exposure costs. Exposure can cost the player points at the end of the game and many of the cards used in the ‘Event’ phase target the player with the highest exposure.

Players begin the game with 8 agents and then select 3 to be their starting conspiracy. Between Season 3 and 4 a draft is held with each player being dealt 8 new agent cards then selecting one and passing the hand to their left. This process continues until each player has 5 new agents.

I say, haven’t I seen you in another game Princess?

Conspiracy – During this phase each player selects one of their agents to add to their conspiracy. Over the course of the game players will build a conspiracy of 7 agents, one per season. All of a player’s agents remain in the order they are played throughout the game. In order to use agent abilities they must be selected during that season. So if an agent has an ability you want to use marked with a 5, you need to select that agent during Season 5. Agents also receive a small bonus for being placed next to an agent with an identical trait

A conspiracy through Season 3 made up of three agents.

Event – A card from the event deck will be drawn. Each card allows the scapegoat to adjust the final point value of two districts, raising one and lowering the other by the amounts shown on the card. Events also have effects that are specific to a certain season and if drawn during that season those events occur. These can range from players gaining money, losing influence, gaining exposure, etc. 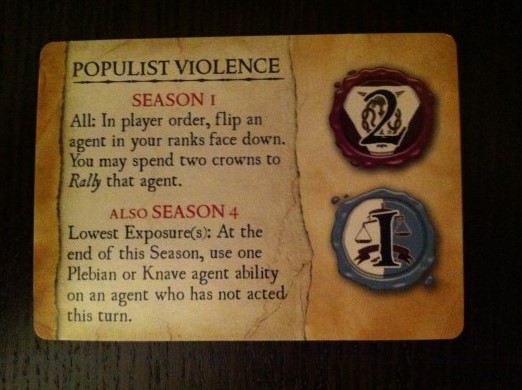 Events happen at the beginning of each Season affecting the game in different ways.

1. Red player places 3 influence in the most valuable block in the Church district.

2. The Yellow player then places 4 influence in the same block.

3. The blocks cancel each other out on a 1-1 basis. Leaving the Yellow player with 1 influence in the block. Giving them control of it, for now.

Action – Each season allows players to take 2 actions, except the seventh (final) season which allows players to play 3 actions. Actions work in a manner similar to canvassing where each player (in turn order) takes Action 1 and then beginning again with the starting player take action 2.

Players may choose from the following actions:

Play continues through Season 7 and at the end of Season 7 each player is awarded points for the blocks and districts they control. Points are then subtracted for the players with high exposure. The player with the highest number of points is the winner.

Dominare is an intriguing game. At its heart this is an area control game with an enormous amount of player interaction. Each turn will see players try to play their agents, replace your influence with theirs and generally wreak havoc with each other’s plans. The agent cards are varied and offer a wide variety of abilities ensuring that each game plays differently than the last. The same is true for the event cards since you only see seven per game and there are 30 in the box.

The unique scoring mechanism of only scoring the game at the very end while allowing the scapegoat (player with highest exposure) to adjust the point value of two random districts each season (per the event card) offers an intriguing balance between controlling the point value of the districts and the risk of losing a large amount of points if you’re the scapegoat when the game ends.

Dominare is also the 3rd game in AEG’s Tempest series of games that all use the city-state of Tempest as their setting. It was nice to see the game take advantage of the Tempest setting. Several of the agent cards are characters from other games in this series such as Love Letter. Seeing Princess Annette as an agent made it seem like this is in fact a shared universe among these games.

Do not confuse Dominare with Love Letter though, Dominare is a gamer’s game. There are a multitude of options during any given phase and the interplay between abilities, events, influence, etc. can get quite complex. The turns also get progressively longer each season as there are more agents per player. Dominare generally played long and with a higher player count is certainly going to take at least 3 hours. This was not a problem for our group as we have several players who enjoy a long, complex game. However, if your group favours shorter or lighter fare, this may not be the game for you. Generally, we found 4-5 players to be the sweet spot for this game, providing plenty of interaction but not taking overly long to play.

While intriguing, Dominare can also be a ‘nasty game’. Players are constantly replacing each other’s influence in blocks and districts and using their agents’ abilities to affect other players. Unlike many modern games that only feature indirect action against another player such as euros or worker placement games, Dominare features direct actions against other players. Thus, it will not be a good fit for all players or groups. It can be very frustrating for players who do not like ‘take-that’ style games to see their influence constantly being wiped out or their agents made useless by another player.

Overall, Dominare is a very good, but heavy game. The large amount of agent and event cards provide a lot of variation so each game feels unique. The many different factions, traits, and abilities found among the agents give players an enormous amount of freedom when calculating their strategies.

Should you use the royal agent who provides more income but no influence or the artist who can place influence anywhere but doesn’t grant any income? Should this agent be played during Season 2 or Season 3? What happens when another player plays more agents than you from the same faction? What if the scapegoat consistently lowers the final scoring value of the district you are trying to score at the end of the game? All of these questions are going on in just one Season (turn) of Dominare.

For players seeking a deep and highly interactive but long game, welcome to the conspiracy.