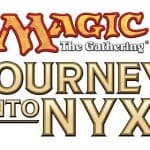 You are reading
Looking At the Mechanics of Journey Into Nyx 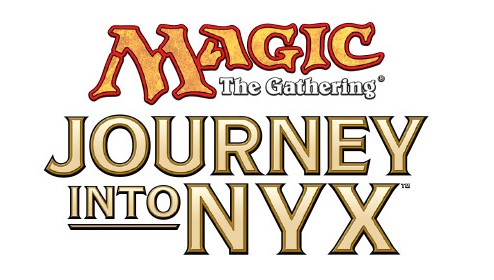 Journey into Nyx will be releasing soon, and in order to help ensure players remain up to speed, an article has been posted on the official Wizards of the Coast website. There were a handful of new mechanics introduced in the Theros block for Magic: the Gathering, and with Journey into Nyx we’ll see them all come full circle. In the article we learn exactly how each mechanic plays out, including seeing examples of cards that use them.

So far the mechanics of Theros are:

Of all the mechanics listed, I’m familiar with them all, save for Constellation and Strive. Let’s take a look at the ones I can explain easily, then we’ll come back to the new ones I see. The following mechanics were explored a bit before in an article we posted when Theros first hit the scene. 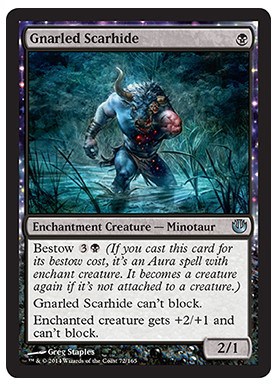 A creature with the bestow mechanic gives a player the option to cast it either as a creature or as an Aura that enchants a creature already in play. You can cast the card for its normal casting cost and it will hit the field as a creature, no biggie. If you choose, however, you can pay the bestow cost instead and attach it to a creature in play, which will grant it with different buffs. Once the creature the bestowed Aura is attached to dies, the Aura then becomes a creature. Think of it as a way to gain both a buff instantly and a creature down the road for one cost.

A creature with the heroic mechanic offers you benefits each time you target it with a spell. The heroic ability printed on a creature card triggers once the creature is targeted with any spell you cast. If the spell targets multiple creatures with heroic abilities, they each resolve their abilities.

When a spell with the scry mechanic resolves, you look at the X number of cards from the top of your deck and rearrange them, where X is the number printed after scry. When you look at cards from scry you put as many of them as you want on the bottom of your library and leave the rest on top of your deck in any order. This mechanic helps you dive down to the cards you need when you need them. 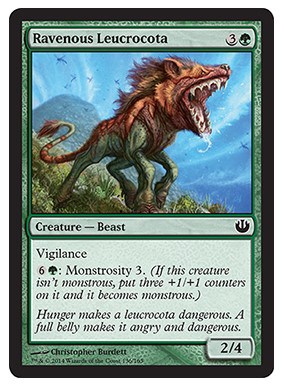 A creature with the monstrosity mechanic has the chance to become a wrecking ball on the table (no Miley included). Monstrosity is an activated ability you can activate at any time you have the mana to pay for it. When a creature’s monstrosity ability is activated it becomes monstrous, usually gaining a number of +1/+1 counters, and in some cases, other abilities. Monstrosity only triggers, when you pay for it, if the creature isn’t monstrous already, meaning you can’t keep triggering it each turn.

When cards in the Theros block reference devotion they are pointing to the amount of colors in the total amount of mana symbols among permanents you control. For instance, if I have three cards on the board that each cost 1B, my devotion to black would be 3. A card with the mana cost of 2WU would have 1 devotion to white and 1 devotion to blue. Mostly Gods count the devotion to colors in the Theros block, but there are a few other cards that call on it. When it comes to deviation, many times a card is looking for a certain amount of it in order for something to trigger. If you have less than what the card wants you can’t meet the requirements for the trigger.

Now we’ll move on to the two mechanics I’m not as familiar with: constellation and strive. 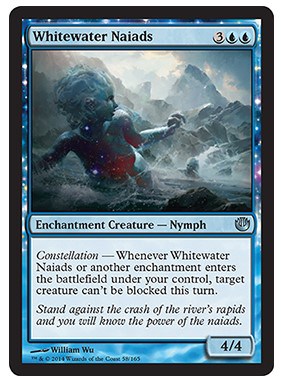 Any spell with the strive mechanic allows you to spend more mana on it to affect more targets. As you cast a spell with strive you can choose any number of targets for the spell. In order for the spell to cast successfully you’ll need to pay the extra mana printed for the ability on the card. Then the card will affect as many targets as you’ve paid for.

With that, we should all be up-to-date on the mechanics of the Theros block. Journey into Nyx is coming soon, and before we know it we’ll be up to our elbows in Gods, each with their own plot. So far the Theros block has been pretty fun to play with, and I’m sure Journey into Nyx will only add to the playability. Keep your eyes peeled for more on the set as we reach the release date!