You are reading
Sentinel Tactics: The Flame of Freedom on Kickstarter 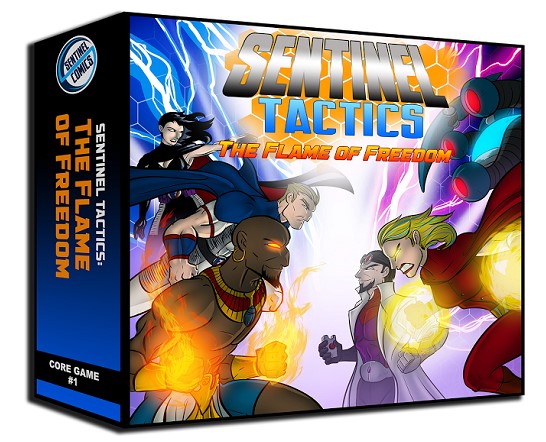 The Freedom Five have continued to save the Multiverse time after time. As players of the game you have had the chance to dawn on the cape and mask and play as one of these great heroes to stop villains from destroying our world. These were the roles that players could find themselves in when playing Sentinels of the Multiverse. The Multiverse is still around in the future but now players get to either be the hero or the villain in Sentinel Tactics: The Flame of Freedom.

Sentinel Tactics is a skirmish game that can either be played tournament-style or through a storyline in scenario based combat. The game is played on a hex grid map using six-sided dice for attack and defense. One player or team of players will play as the heroes while the other side will play as the villains. 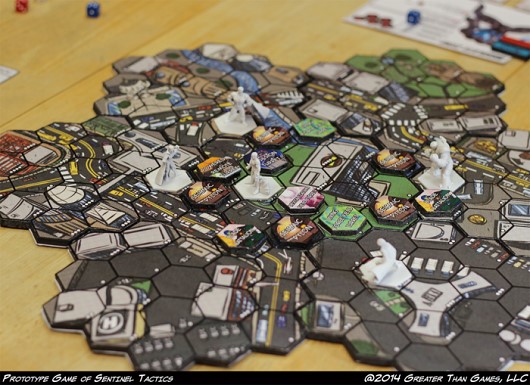 Greater Than Games has teamed up with TacDice systems to create Sentinel Tactics. The game components feature a hex grid map tiles, power cards for all characters, tokens for characters and effects, dice, and a scenario book styled in a comic book appearance. There is also miniatures for the game that feature the heroes from The Freedom Five and hero Ra as well as villains Baron Blade, Omnitron-V, and Citizen Dawn. These are offered as extras that can be added to the base game.

The Kickstarter is doing really well and should fund very soon. Knowing how great Greater Than Games’ previous Kickstarters have went the stretch goals should be easy to hit and will add some amazing content to the backers’ pledges. Check out their campaign and continue saving the Multiverse unless you are playing the villains then you might want to consider conquest.

Facebook Twitter Google+ LinkedIn Pinterest Tumblr
Previous article Games Workshop Announces New Releases for The Hobbit: Desolation of Smaug and Warhammer 40,000
Next article Throwing Your Lot in with the Crowd – The Factions of Malifaux
Board Games