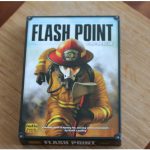 In Flash Point: Fire Rescue, designed by Kevin Lanzing and published by Indie Boards & Cards, you get to play as a team of firefighters, working together against the clock to save victims of a raging house fire.  The game can be played with one to six players, and depending on how many people are playing, a single game takes about 45 minutes to an hour. There are eight expansion packs that can be added, but everything you need to play is included in the base game.

My wife and I picked this game up at GenCon last year. We were very specifically looking for multi-player co-operative games that play well with two people. There are surprisingly few out there. We must have demoed thirty games at the con, but only came home with two (to be fair, we had agreed beforehand to only come home with two).

Flashpoint was the first of the two we purchased. We demoed it twice at the convention hall, then played twice at the hotel room later that night. And we’ve played at least once a month since we picked it up. 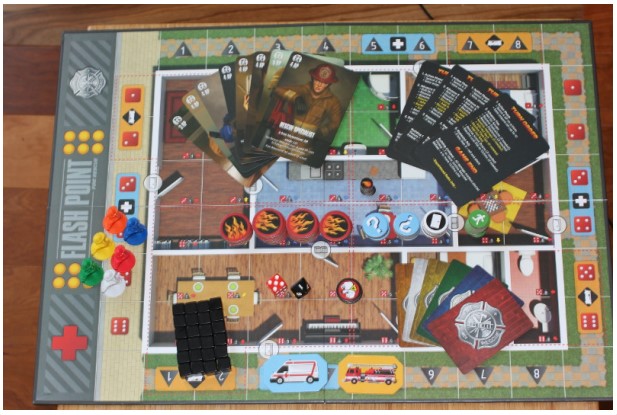 Inside you will find:

There are two different modes of game play in Flash Point: Family and Experienced. In both games, the goal is the same: rescue 7 victims from the burning house before the building collapses. The building will collapse when all 24 damage markers are placed on the house.

If this is your first game, then you’ll want to play the Family game just to get the hang of the rules. In this mode, you set up the board (the house) based on the detailed picture in the rule book.

If you play the Experienced game, you first choose the difficulty level you wish to play at: Recruit, Veteran, or Heroic. Then you set up the board by rolling dice to determine where fire has started inside the house. The higher difficulty level, the more fire and the more hazards you place before the game starts.

Players can play more than one firefighter per game, with more than one Specialist Card if so desired. There are rules to balance out the difficulty based on the number of firefighters being used during the game.

After you’re all set up,  you place your firefighter on a square outside of the burning house and choose who goes first.

The turn order is simple.

Each player has 4 action points to spend on his/her turn. (If you are playing the Experienced mode, then your specialization may grant you extra action points, or action points which can be used in specific situations.) 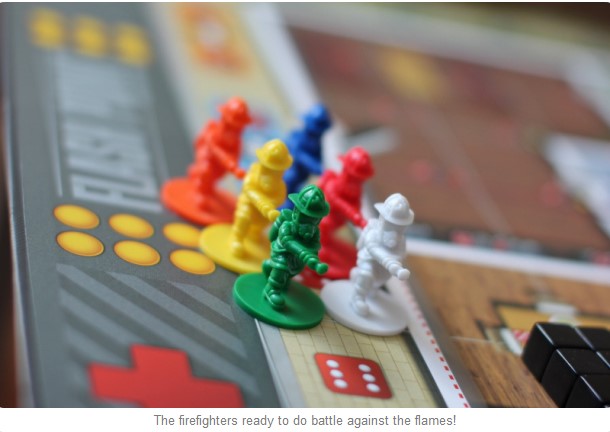 The firefighters ready to do battle against the flames!

The game comes with handy Player Aid cards which tell you the costs of various actions.

Each turn, based on the layout of the fire and your specialization, you choose which course of action you want to take: fight the fire, attempt a rescue, dispose of hazardous materials, etc… 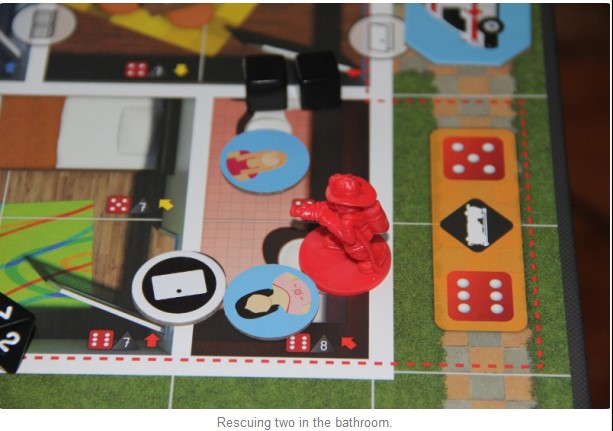 Rescuing two in the bathroom.

When you have used all your action points, or chosen to save them, then you roll both the eight-sided and six-sided dice. The board is laid out to be eight spaces long by six spaces long. Use the dice roll to determine which space on the board the fire spreads to.

If that space is empty, you place a smoke marker in the space.

If the space already has smoke in it, then you flip over the token, making the smoke into fire.

If the space is already on fire, then you set off an explosion. This is where the excitement of playing a firefighter comes in. 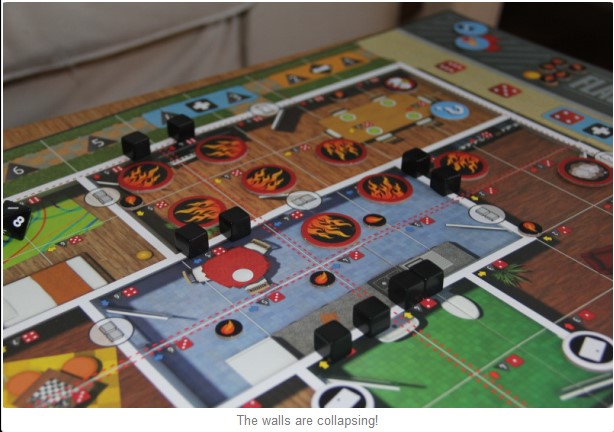 The walls are collapsing!

Make Sure There Are 3 POI Markers On The Board:

Again, your goal is to rescue seven victims from the burning house. Victims are represented by POI makers—small light blue disks with a question mark on one side and either a picture of a victim or a blank on the other side.

When you move into a space with a POI marker, you immediately turn it over to reveal if you’ve found a victim or nothing at all. The idea is that in the chaos of a smoke-filled burning house, it’s difficult to tell if that large shape on the bed is a person or just a piece of debris.

All seven are rescued.

When you find a victim, you then have to get them outside of the house to safety. If you are playing the Family game, it’s enough to simply get the victim out of the house. But in the Experienced game, you have to get the victims into the ambulance. There is only one ambulance, and it costs Action Points to call it on the radio and get it to drive around the house to your position.

There must always be three POI markers on the board. If, at the end of a turn, you have rescued a victim or have revealed a blank, then you must add another POI marker to the board. To do this, you simply roll both the six- and the eight-sided dice, and place the POI marker on the spot indicated. If the spot has a fire or smoke counter on it, you remove the fire/smoke before placing the POI.

Every time we play this game I select a random Specialization Card to determine what roll I will play. Technically, according to the rule book, players can directly choose which specialization they want to have. Though I do have my favorites, I find that having to adjust to the random character each game adds to the fun.

The last time I played, I was the Driver/Operator. The Driver/Operator can fire the engine’s deck gun for a reduced cost. If you stay on top of things, you can really control the spread of the fire, and help reduce the chances of getting explosions or adding damage counters to the house. I really enjoy this specialization. The deck gun instantly puts out a fire in the square it hits, as well as putting out fire in all adjacent squares. On a good roll, you can actually extinguish the fires in up to five squares. In comparison, it takes a single firefighter two action points to put out a single fire. Best case scenario, if you are the CAFS Firefighter, who has extra actions to put out fires, you can put out three squares of fire in a single turn. So I find it terribly satisfying to fire that deck gun. 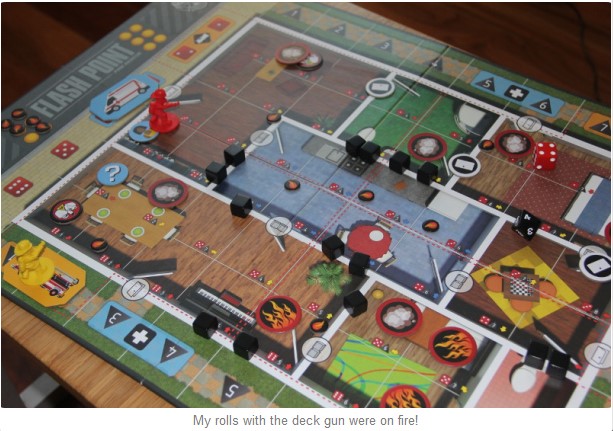 My rolls with the deck gun were on fire!

Other than being a good co-operative game (which saves my wife and I from unnecessary matrimonial disputes) that plays well with only two players, there are two things that really stand out with this game.

First, it’s got a ton of replay value. There are two boards, six different Specialties, adjustable difficulty levels, and each game has a random, custom set up, so that no game plays exactly like the last. We have a lot of games, but as soon as my wife has a game figured out, she will either beat me every time, or she will figure out the optimal path to winning and get bored. Flashpoint has enough variation to keep her interested, and remains in the game night rotation. It gets big points for that from me

Second, the design is very, very slick. You can just feel the hours and hours of play testing that went into it. The choices you make are all meaningful. When to save your action points, where you leave your firefighter at the end of a turn, whether you try to save a victim or fight the fire to reduce the chances of explosion are all important. And a lot of balancing has been done to make sure the difficulty level is maintained no matter how many people you play with.

We got them out in the nick of time.

Additionally, the game board and the dice rolling are very well intertwined. The game board is laid out on a 6X8 grid, so the six-sided die and the eight-sided die can dictate where any action can take place. However, there is a case where you are only able to use one quarter of the game board (specifically, when you are firing the deck gun off of the fire engine.) It’s possible when you roll that you will hit something outside of the legal quarter that you are targeting. Instead of making the player re-roll, or simply saying that you fail, instead, you flip over the die to reveal the number opposite the one you rolled. This will always give you a legal target, and feels a lot more friendly than other possible rule options. For me, this is a very elegant solution to an obvious problem, and, well, I really appreciate the effort that went into finding a simple solution.

If you are looking for head-to-head competition, or if your game group doesn’t co-operate well (maybe you’ve got a griefer or two in your party), then this game isn’t for you. But if enjoy working out strategies with other people, and like to change plans on the fly based on changes on the game board, then you’ll definitely enjoy Flash Point.