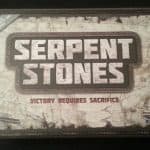 You are a master priest of an Aztec warrior house, and have been charged with protecting Teotl temple stones, stones that store the power that runs the world. The opposing house must now face each other on the Serpent Stones Yaotitlan, a battlefield designed for sacrifice. You will command Aztec warriors to build a human serpent chain to gain access to the other house’s Teotl stones. Can you wield the power of the Nahualli Spirit Attacks, or will you be outwitted by their house’s power? Only one will walk away from the battlefield alive.

Serpent Stones is a card game based on a 600 year old Aztec board game and was made by Dangermoose Entertainment. Serpent Stones as a base game comes with its expansion, End of the Fifth Sun.

Serpent Stones comes in a small box, but packs a lot of content, including :

The game cloth is made of good quality and wouldn’t tear easily, and the Teotl stone tokens are solid and have great weight to them. The cards are also thick and done well.

After laying the mat out, shuffle the deck. Players draw cards until a Jaguar or Eagle Warrior is drawn. The player to draw the first warrior sits on that side of the game mat. The deck is shuffled again and each player is dealt 7 cards, leaving the rest of the deck on the Draw Stone on the mat. Then, each player discards 2 cards to begin the game with 5 cards in their hand. Place each player’s Teotl Stones in the center of their Temple. Jaguar house player should have their stones gray side up, and the Eagle house will use the blue side. 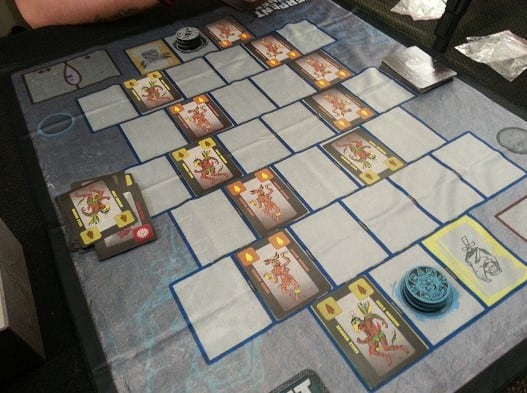 Serpent Stones plays in rounds, in which each player takes two actions : Draw a card, and play (or discard) one card. These rounds continue until one player has captured all of their opponent’s Teotl Stones. If at any time the draw deck is empty, reshuffle the discarded cards to make a new deck.

You build a serpent chain by placing Warrior cards with arrows pointing in the direction your chain is going. The first card played, on a keystone next to the temple row, must be a warrior belonging to that player’s house. After that, they may play either Eagle or Jaguar warrior cards. Place Warrior cards stacking alternating positions up the board to try and reach your opponent’s temple with an unbroken chain of Warrior cards. If you play a Warrior card on your opponent’s Temple Stone, you win the round, take a stone, and place it in your capture bowl. 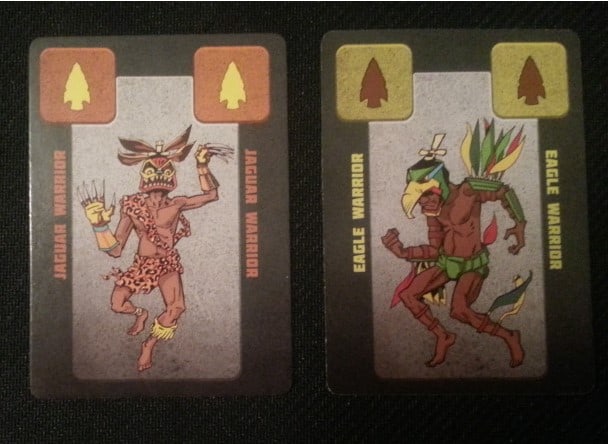 Players can’t place warrior cards on their own temple stones, and only one warrior card can be in a space at a time. If at any time a warrior card becomes separated from the chain, it is inactive. This break in the serpent chain means it must be filled to restore order to the chain, and it cannot attack.

The next card type are Nahualli cards which are used to attack your opponent’s cards. These are played on an opposing card and then discarded. There are strike cards of each of the following animals : Beetle, Owl, Scorpion, Skunk, and Jaguar. There are also capture cards for each of : Butterfly, Bat, Coyote, Monkey, and Hummingbird. These attacks do many things from knocking a warrior card off of the playing field in various patterns, to swapping single or multiple cards to face the opposite direction, thus breaking the chain and using these Warrior cards to the advantage of the person that played the swap. 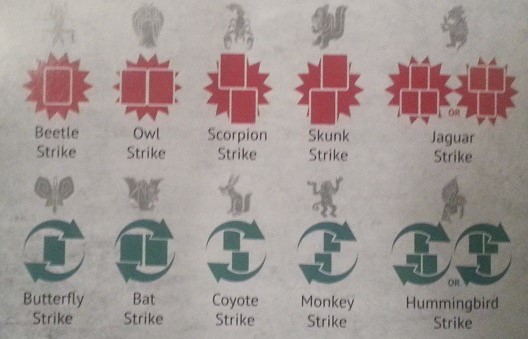 The last card type are Teotl cards, or God cards. These contain images of Aztec gods, and can be used for special attacks, as long as the player speaks the name of the god out loud to invoke its power.

In order to perform a sacrifice, a few things must be done. On the player’s first turn (Preparation Turn), they will draw a card as usual, play the Huitzilopochtli card, then choose a second card and place it face down on on Sacrifice Stone One, the spaces on the lower right side of the player board. After this, the turn ends.

On the next turn, player will draw a card as normal, and then play (or discard) the card on Sacrifice Stone One. Then, they may play another card from their hand. It is possible to do a double sacrifice, where a player would place a second card onto Sacrifice Stone Two, and continue onto the third turn, where the player then must play or discard the first card, the second card, and then play from their hand.

There are a few more variants on the game that go into greater depth for those wanting more of a challenge.

The End of the Fifth Sun Expansion adds a few more Nahualli cards, and more Teotl cards. One of these new gods allows a player to place a Skull Wall, or a permanent blockade on the Serpent Stone playing field. 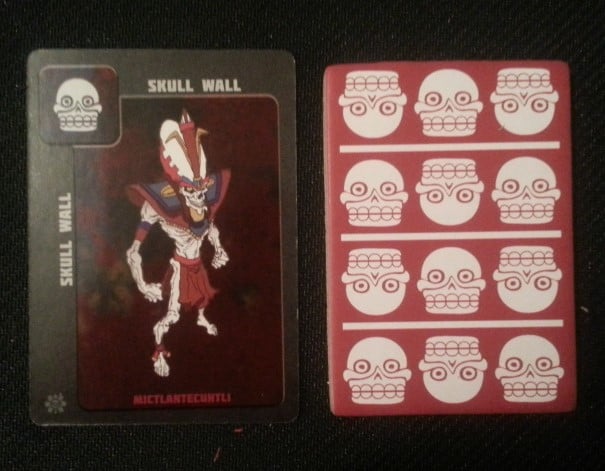 Linking The Serpent Stones Chain Together

I really appreciate the theme of this game, and that it was developed from an ancient Aztec game. I was excited to get it to the table, and enjoyed going through the components upon first opening the game. The cloth game mat was different, but a nice relief from the normal game boards. The aesthetics of the game are certainly strong, but what about playing the game?

The first few games contained a lot of trial and error, as I felt the rulebook wasn’t very clear and we spent more time debating details of the rules and where in the book we’d find information that would tell us what to do next.  Once we had the rules down, I didn’t see a lot of replayability in Serpent Stones. No two games would be alike, that’s for sure,  but it also wasn’t very impressionable.  It is a game I’d be willing to teach someone that had interest in it, but not something I’d be likely to pull off the shelf and suggest to a fellow gamer.

Also, the book isn’t very clear about the name of some spaces on the board. The rulebook constantly refers to Serpent Stones as a location, and it took a while to realize that all the spaces on the game mat are individually, serpent stones. The wording on many items and components of the game seem to be cross-referenced, making us take a double take at the rules to distinguish certain aspects of the game. 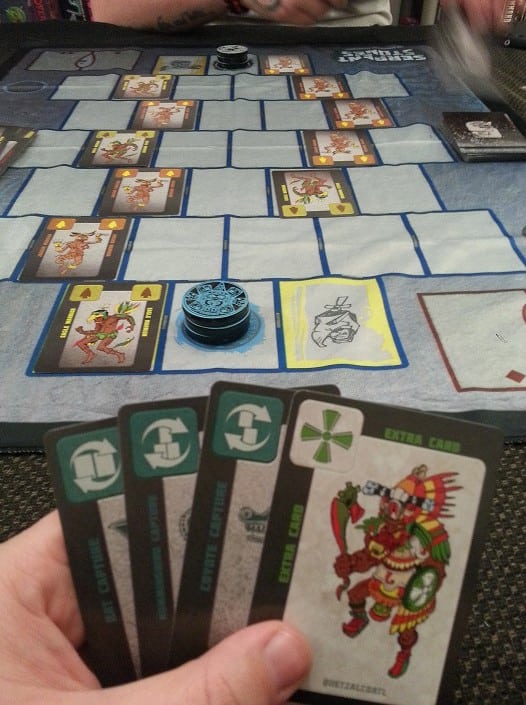 However, I did play one game of Serpent Stones with someone who really enjoyed the game, and I could easily see this person pulling it out frequently, so if card placement games that require some strategy floats your boat, it might be worth looking into. Personally, I found it to be boring after some time, though.

Dangermoose Entertainment did a good job at translating the theme of Aztec culture into a modern day board game, so I’d certainly recognize the work they put into the game. Serpent Stones retails for $40.00, and I feel would make a good addition to a game library belonging to gamers regularly looking for 2 player games, provided the theme and gameplay tickles their fancy.