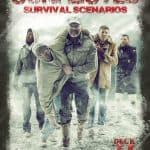 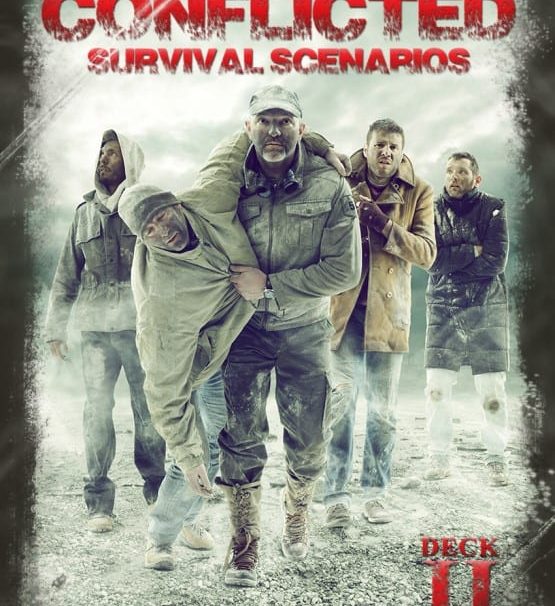 The game that challenges you to choose between what’s right morally and what is best for your personal survival is back with a second deck of gut-wrenching scenarios! Conflicted: The Survival Card Game Deck2 brings you even more questions to leave you torn about what to do. Check out our review of the first Conflicted game if you haven’t already, and then prepare yourself for a peek into the second deck.

The same as the previous deck, Deck2 contains 54 total cards. Scenarios and questions are on 52 of the cards, and rules are on the remaining 2 cards. The backs of this deck’s cards features 5 survivors, one looking particularly not well-off, the others straggling forwards towards the camera.

One unique thing about this deck is that there are now fan-submitted scenarios. Those that were submitted by fans have a green stripe above the question crediting the person that submitted the scenario used.

The only thing you need to bring to the table is your best survival skills.

In addition to the new scenarios submitted by fans, the rules have changed slightly in this deck. To see how the first deck rules compare, please refer to our review of the first Conflicted deck.

As with the first deck, players are to assume that the world is in utter chaos, and the apocalypse, in one way or another, has already taken place.

After shuffling the deck and placing it face down in the center of the table, the first player reads a card, and then each player answers the card. The player asking the question awards one point to the player with the best answer, and can give the card to the winning player if they’d like to keep track.

This action repeats clockwise until players reach the end of the deck or have played as many rounds as desired.

Ethics and Existence Continue To Go To War

Just as with the first deck, Conflicted: The Survival Card Game Deck2 left me befuddled. I did mainly play the second deck with friends and family that were already survival-minded in order to delve deeper into the questions without the fear of strangers feeling that I may be too extreme with my answers. If you are a survivalist/prepper looking to hone your skills and put your current knowledge to the test, get together with like-minded folks and discuss! You’ll be amazed at the things you learn. If you’re a gamer who loves end-of-the-world themed games, this is right up your alley as well.

The only thing I didn’t like about Deck2 is the rule change. The reason I didn’t like it is because if the player asking the question isn’t as serious or survival-minded as their fellow players, they may award points to players who provide answers that may not be as well thought out as others. The same could be said for the previous rules, saying that those without survival knowledge could get scored lower than others, but I believe that that helps with the learning process more so than the new rules.

These questions weren’t repetitive and brought all new scenarios to the table, and some of the questions just get more intense the more you read into them. What do you do when deadly viruses break out near your home town? How would you rebuild economy? What are the most important skills to teach your children in event of end-of-the-world scenarios? What would you teach them post-apocalypse? These and so many more will be laid on the table for you to face in Conflicted.

Check out PrepperChicks.org and MomWithAPrep.com for more information on survival!

In addition, as you’ve seen, there are fan submitted questions, and you can submit yours for the chance to be featured in the game and win a copy of the next deck! That’s always awesome.

Deck2 is retailing for $14.95 and you can pick it up on the official Conflicted webpage by clicking the “Buy This Game” button below! Be sure to check out other features of the Conflicted site, including polls on the theme of the upcoming decks and other forms you’d like to experience Conflicted Scenarios through!