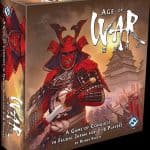 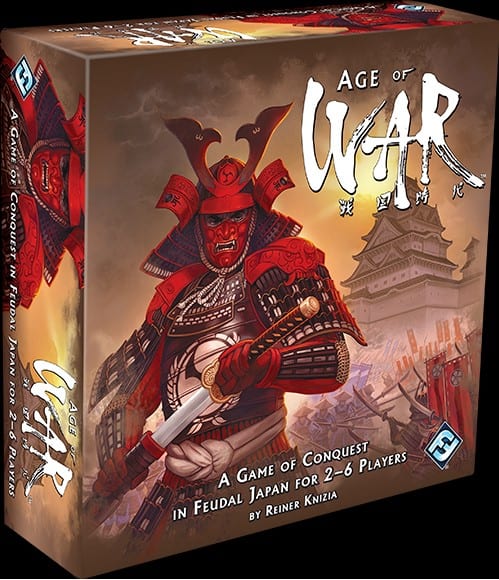 Reiner Knizia and Fantasy Flight Games have once again brought us a wonderful game. This time it is Age of War, a dice game of conquest in feudal Japan. Two to six players go head to hide to wipe out their opponents and unite Japan under their own banner, but keeping claim over Japan is more difficult than it seems.

In Age of War, players commit armies to attack one of six castles, and then roll the dice to try and match the symbols on the castle’s battle line. If you can manage to roll all the needed die faces, your attack is successful and you take the castle into your point bank and claim it as your own. If you cannot fill all the lines, the attack has failed and the castle remains on the board. However, just because you conquer a castle doesn’t mean its a permanent claim. Other players can attack the castles in your possession to reclaim them. If you can manage to claim all castles belonging to a clan, then those castles cannot be stolen from you.

The game ends when all of the castles have been claimed, and the winner is determined by the player with the highest score! Age of War is coming in the second quarter of 2014, and you can test your tactics when the game hits store shelves! Check out the announcement page for more details and photos about the game, and keep your eyes peeled for a release date!