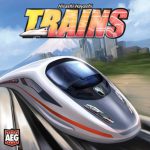 You are reading
Written Review – Trains

In a world, increasingly unlike our own, where trains are still a growing mode of transportation, you get a chance to put your mark on the face of Japan in the form of train tracks! Will you make a standard grid or go fancy and perhaps go for an argyle-style criss-cross pattern? Will you take the long but easier way through the open fields or go for broke over the mountains and rivers? You’re not the only burgeoning railroad tycoon, however. Available land is limited and competition makes building costs go up and up, so don’t let those other tycoons beat you to the punch.

Inside this box you will find:

The game board is simple but sturdy and easy to read on both sides, both Tokyo and Osaka. The two maps offer an excellent diversity of terrain: Fields, Rivers, Mountains, Cities and Remote locations. After a few plays, I’d have to say that Tokyo is the easier of the two maps for beginners and Osaka presents interesting challenges well after players get a good feel for the rest of the game.

This color coding becomes important when you have 16 piles of cards on the table in any given game and you need to quickly and easily differentiate their functions from one another. 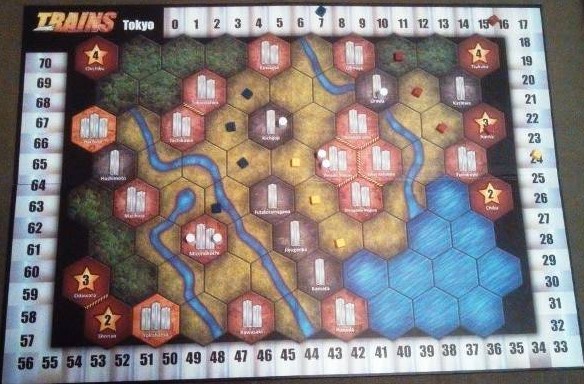 If you’ve played any of the glut of deck-builder games of the past couple of years, then this game will be familiar to you as will its setup. The game comes with a plethora of different stacks of cards, of which you use 16 in any given game. Of those 16 stacks, 8 form the common supply of cards. These are cards that you will use in every game and form the core of what players can purchase to make their decks. The game comes with a set of randomizer cards to help you choose the remaining available 8 stacks and spice up play with some variation from game to game.

Once those 16 decks are set up – I strongly recommend playing with the Landfill card for your first few games, you’ll thank me later – each player picks a colored set of rail tokens and places one of them on the score tracker that runs around the edge of the game board.

Like most any game in the deck-builder genre, Trains players start with identical hands made up of 10 ‘Starter’ cards. Seven of these are train cards that provide Each player uses those ten starting cards to purchase cards from the available stacks of supply cards. Each card has a purchase value as well as a production value rating; that is how much value it produces when you play it. 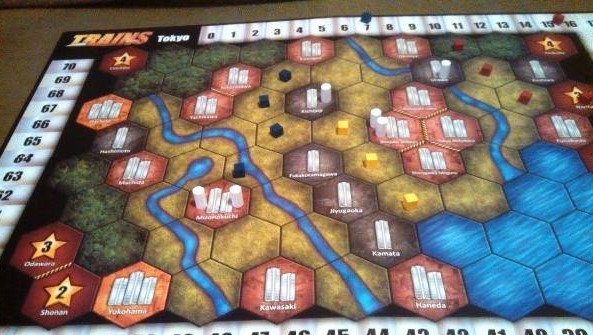 On each player’s turn they may play actions, build rails or stations or buy cards from the supply decks in any order they like. Look for synergies here that might be order dependent in order to stay ahead of your competitors. Each time you gain a card (from buying or another type of action), that card goes directly into your discard pile. At the end of your turn, any cards you played (for actions or for currency), and cards you didn’t play from your hand, all return to the discard pile. At the end of your turn, draw five new cards from your deck. Deck empty? No problem! Shuffle your discard pile and voila, there’s your new deck!

All of this is pretty standard for modern deck-builder games. What sets Trains apart and might be a palate cleanser for those tired of deck-builders is the map play. Not only must players spend currency to buy new cards to improve their deck as they play, they must also spend currency to build rails. Expanding into the empty fields is free but rivers cost an additional 1 and mountains cost 2. As if that weren’t expensive enough, each time you want to build a rail into a city, you pay 1 more for each station already there, AND for each rail belonging to another player that’s already in that space. 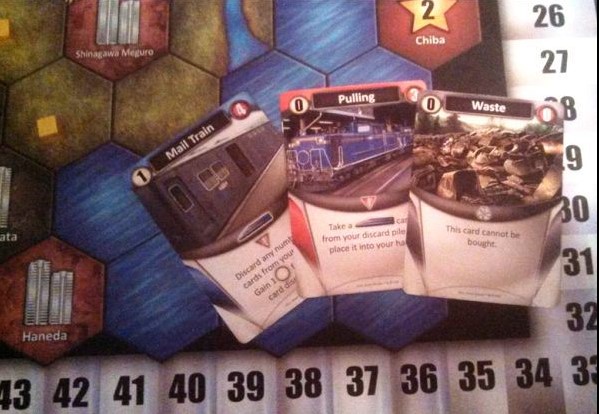 Play continues until one of several end conditions are met. It’s a challenge in and of itself to keep an eye on those conditions and make sure that other players aren’t trying to rush the game to end with a lead. Most of the point scoring happens at the end of the game and falls into that funny pattern a lot of board games do where the accounting of scorekeeping is nearly as fun as the game with the right group of silly friends.

Why ride the rails when you can build them?!

When I first demoed this game at GenCon 2013, I wasn’t expecting much. Mostly I wanted to get off my feet after shuffling around the showroom floor for hours, ya know? My wife is a big fan of deck builders but I’d sort of had my fill. After a few minutes, though, I found myself trying to figure out how to maximize my actions on the game board through the familiar mechanics of deck-building. I didn’t get a chance to get back to this game until fairly recently, by which time I’d forgotten all about it. I was glad to rediscover it. For hardcore board gamers, it’s going to be a snoozer for the most part. The map does add an extra element that I find enjoyable but it’s far from hardcore.

Overall, I’m a fan of the game. Since the Dominion clone wars started, it had been a while since I’d seen a nice twist on deck builders. Trains offers that and then some. This is the kind of game that’s great for a more casual group or when your brain is fried from other, more complicated games (I’m looking at you, GMT!). It’s also a great game for people fairly new to board gaming. The mechanics are fairly quick to pick up, the art is pretty and engaging and the theme is appealing. Who doesn’t want to be a tycoon? Especially one of the railroad variety.