You are reading
Written Review – Keyflower 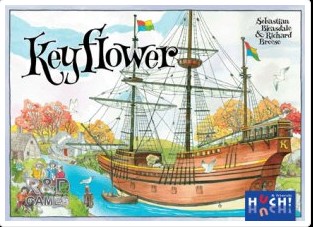 “A village is a hive of glass, where nothing unobserved can pass.“

Who can build the most successful village? How will you manage your workers and resources to produce victory? In Keyflower by Richard Breese and Sebastian Bleasdale from Game Salute, 2-6 players age 12+ will take the challenge of selecting the best locations and using the right workers at just the right time to make their village the most bountiful in the land!

Keyflower comes with the following components:

Keyflower is played in 4 rounds, one for each season of the year starting with spring. During each season various tiles will be available for players to bid on and add to their village. Tiles may also be used to generate resources, earn gold (victory points) or upgrade existing tiles in a player’s village. There are also tiles that represent turn order for picking ship tiles. Ship tiles are available each season and are used to replenish a player’s supply of meeples. Some ship tiles also have skill tokens which represent things like mining, carpentry, etc. which can be used by players to upgrade certain tiles. The number of tiles available each season is determined by the number of players. 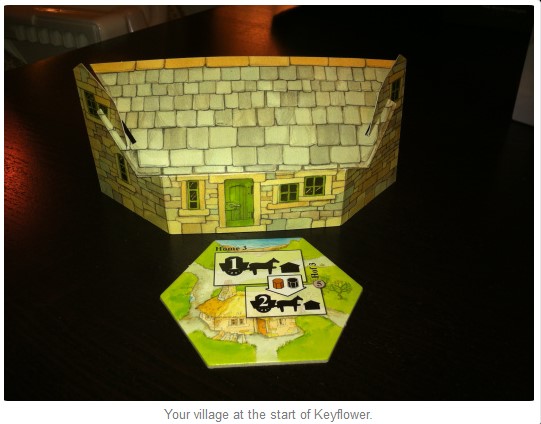 Your village at the start of Keyflower.

Each player starts the game with a supply of eight random meeples (drawn from a bag) which can be any of the three basic colors, red, yellow, or blue. These meeples are kept secret from the other players behind their player screen. Each player will then have eight meeples in a mix of colors to start the game.

Your village meeples ready to go at the beginning of Keyflower.

During their turn a player may take one of three actions:

1. Bid for a tile – During each season there are a number of tiles available for auction. By winning a tile a player can add that tile to their village at the end of the round. The first player to bid on a tile may use any number of meeples but they must all be of the same color. Anyone else bidding on that tile must also make their bids in the same color. So if there is one red meeple bid on a tile, you must bid at least two red meeples to win the tile. If you are outbid on a tile when it’s your turn again you must either increase your bid or move your meeples to another tile. Once meeples are used for bidding they cannot be returned to your supply.

2. Use a tile – by placing a meeple on a tile that’s available for auction or on a tile in any player’s village the player can use the effect of the tile such as generating resources, moving resources, upgrading tiles or generating gold (victory points). Meeples placed on tiles will go to the owner of the tile at the end of the season. If the tile is in a player’s village it goes to that player, if the tile is up for auction it goes to the winner of the tile. Similar to the auction rules, if a player is the first player to use a tile, they may place any color. Otherwise, they must use the same color as either the current bid, or the meeple already on the tile. Each tile may be used three times in a season, but each use costs one more meeple. So the first use of a tile costs 1 meeple, the second use costs 2 meeples, and the third and final use costs 3 meeples. 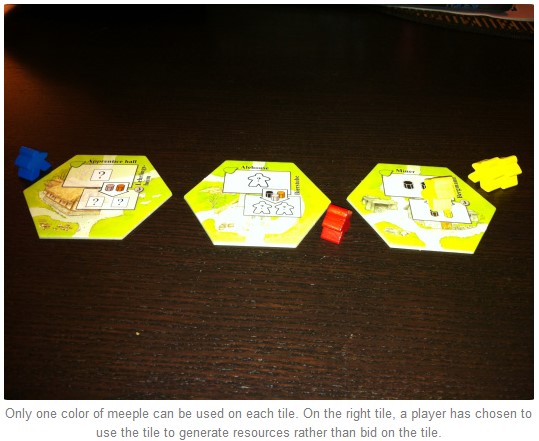 Only one color of meeple can be used on each tile. On the right tile, a player has chosen to use the tile to generate resources rather than bid on the tile.

3. Pass – During their turn a player may pass and by doing so chooses not to bid on a tile or use a tile. Unlike many other euros, there is no penalty for passing on your turn. This allows you to see what other players are doing and can allow you to conserve meeples for later turns or rounds. When your next turn comes back around you may bid on a tile or use a tile normally. However, once all players pass the round ends and play moves on to the next season. This makes passing a valuable but risky option during play, adding another element to consider on your turn.

When a season ends, all meeples used for bidding on tiles are returned to the bag. Meeples that were used on tiles go to the owner of the tile, and players who won tiles in the auction add them to their village. Finally, in turn order players decide which ship tile they will use to replenish their meeple supply. Then the ship tiles have their meeples and skill tokens randomly replenished and play resumes with the next season.

The game ends after the round representing winter is complete. Players than add up the number of victory points from tiles, add a point for each gold they have, and finally add any bonuses that may apply. The player with the most points is the winner! 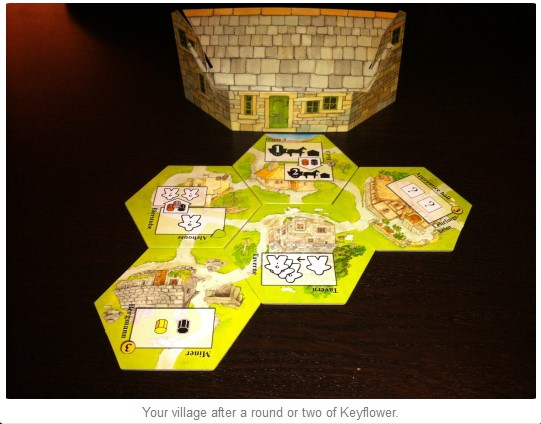 Your village after a round or two of Keyflower.

Keyflower is an outstanding game. It has a very elegant design and it succeeds in providing a unique gaming experience. It combines a variety of familiar mechanics such as auctions, worker placement, tile-laying and resource management to produce a streamlined but still very satisfying game. Each turn in Keyflower presents players with meaningful and interesting decisions. Do I bid on a tile? Use a worker to produce resources? Use a worker to upgrade a tile? Pass, to save my workers for the next turn? If I pass, will there be a next turn this round? Every turn counts in a game with only 4 rounds and this adds to the tension of the game.

The game also offers a fair amount of player interaction for a euro-style game. Auctioning tiles and placing workers ensures that players will come into conflict (albeit of the mild sort). “Really? You’re bidding four yellow workers for the forge tile?” and “I can’t believe you used a blue worker there! How am I supposed to use that tile now?” are among the many varied things you might here during a game of Keyflower. These interactions help make the game more than the multiplayer solitaire of some euros.

Keyflower is an excellent game with a satisfying mix of mechanics that gives the game a unique fresh feeling.  Highly recommended!