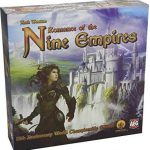 You are reading
Written Review – Romance of the Nine Empires 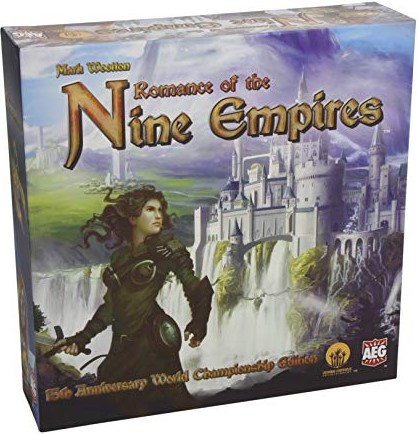 Countermay is known as The Tapestry of Worlds. It is home to vast meadows, green pastures, and more beautiful sites than you can imagine. Sadly, after a thousand years of war, Countermay is dying. Food is running out, and the threat of starvation hangs above the many civilizations living in this once great land. By choosing one of the civilizations living in Countermay, it is up to you to help restore the balance and bring peace to the land. How you choose to lead this civilization is up to you. Will you help restore Countermay to its once great glory, or will you continue the starvation and send the rest of the world to hell?

Romance of the Nine Empires is a fictitious card game developed by Alderac Entertainment Group to be used in a film called The Gamers: Hands of Fate. In the game, players assume one of the different warring factions – including steampunk aliens, hordes of undead, and even displaced American GI soldiers – to expand and glorify their nations. The game is based off of The Legend of the Five Rings collectible card game from the same publisher. The players have a hand in affecting the game’s overall storyline based on who wins championship tournaments. After a successful Kickstarter campaign, Romance of the Nine Empires (R9E) was made into a full-fledged game. This box set represents the 15th Anniversary Championship Edition, and holds the decks used by those who took part in the championship held at Gen Con in the movie.

Contents of the Empires

In this boxed set you will find:

Everything fits nicely in the box, though the food tokens scatter a lot.

In R9E each player chooses one of five different factions and tries to bring them to glory on the battlefield. Players will construct decks using cards included in the set, though there is a beginner deck for each faction that can be played right out of the box. Setup doesn’t require much, though there’s a little bit of card breakdown that needs to be known before you play.

Each faction has a house card to represent them. Then there are five castle cards that act like provinces from L5R, if all of these castles are lost in a result of battle then you lose the game. Beyond the castle cards are properties. Properties provide you with gold to buy other cards and sometimes abilities that can help you on your turn. Next up are hero cards, which will be your main source of attack and defense. Hero cards are sent out to attack your opponents, raid their castles, and defend your own.

Castles are your last line of defense, and if they fall you lose the game.

Cohort cards attach to your hero cards to make them stronger and create units when it comes to battle. Item cards do pretty much the same thing, only they’re items and not dudes, for all intents and purposes. Quest cards allow you to gain renown, which can be a victory condition. Tactic cards help you in battle, offering abilities that affect your or your opponent’s units on the battlefield. Finally there are Spell cards, which offer a myriad of different abilities for you on your turn.

Hero cards are your way to fight battles in Countermay.

Gameplay proceeds through turns which are broken down into four phases: Spring, Summer, Autumn, and Winter. Players take actions during these phases, one per player, alternating back and forth until both players pass. Let’s take a quick look at each phase.

Setup for a player.

During the Spring, players unbow (turn right-side up) all of their cards. This is also known as refreshing the board.

Properties bow to produce gold that you can use to purchase cards.

The Summer phase allows players to purchase cards, and initiate attacks against opponents. This phase is where your property cards come into play. By bowing properties you will earn gold which can be spend to either purchase more properties, summon heroes, and perform other tasks which require gold. Properties you purchase enter play bowed, though heroes do not. They’re always ready for battle!

In this example, the Ord player is defending an attack on the castle shown.

Speaking of battle, the Summer phase is the one during which you can attack your opponents. When you attack, you choose one or more heroes/units to attack one or more of your opponent’s castles. Your opponent then chooses one or more heroes on his side of the board to defend those castles. Then, starting with the defender, each player makes a series of battle actions. Tactics cards can be played here, giving you an edge during your battle. Heroes/units can be bowed (AKA engaged) to cause damage to the defending heros/units, which is the main way to remove cards from play. Heroes have a strength value printed on their card, which works two different ways: the strength is how much damage they do to opposing heroes/units and it is how much damage they can take when being attacked.

The Ord hero engages for damage, dealing 4 to the opposing hero.

When engaging for damage, the opponent must soak it all. Defenders can destroy heroes/cohorts on their side of the board in order to soak damage, as well as discard food tokens from castles. When you can’t do either, the castle must be destroyed to soak the rest of the damage. Like I mentioned earlier, if a player loses all of their castles they are out of the game.

Tactic cards can turn the tide of battle in your favor.

During Summer players can also complete quests. By completing quests you’ll earn renown, and if you ever end your turn with 50 renown you win the game. Quests can also reward you with other things, such as food. Food is a very valuable resource in R9E, as it is spent to purchase heroes, properties, and more. If you run out of food, you also lose the game – it’s that important.

During the Autumn phase players can try to raid one another’s castles for food. Raiding works pretty much the same way as attacking, only one hero can be assigned per castle. You’ll place cards from your hand face down over the raiding hero to act as a Stealthy card. Once you’ve sent all heroes and your opponent has sent defenders, the Stealthy cards are revealed. Each card has a fate value at the bottom-center of the card. Whoever has the highest fate value prevails in a raid. If your hero succeeds, you steal one food from your opponent’s castle and bring it back to yours. If he does not, he goes home sad.

Lastly, during the Winter phase the players have some upkeep to manage. Alternate win conditions (such as renown and food shortage) are checked. Players can redistribute food as needed during this phase as well.

Play continues until someone meets the required win conditions. Each deck is built differently, and each faction excels at a different win condition. For example, the Ixsasha are skilled in shorting opponents on food, and the Ord are great at raiding.

Will Countermay Rise Again to Glory?

Romance of the Nine Empires plays exactly how it was built to: as a collectible card game. The game has a lot of situational rules, timing and card effectiveness are weighed heavily, and deck construction really is key. Battles are incredibly engaging and critical to your success. Too little defense and you’ll lose before you can blink. Not enough offense and you’ll be starved to death.

Cast these spell cards to aid you during play.

The thing about R9E, though, is that it’s not a CCG. There aren’t any packs to buy, as this was released in a single set. You can have the experience of a rich CCG without sinking tons of money into it like with most other games of the genre. For players who have abandoned CCGs because of the money sink, this could be a great big breath of fresh air.

Gameplay is intense, and it can become quite complicated. Some decks just don’t stack up well against others, while some feel too overpowered. You have to weigh your options and really know which faction to play when going into R9E. Sometimes the simplest of decisions can make or break a game for you. Choosing who you will send into battle is important, just as much as it is to choose who and how you will defend. There’s a lot of strategy built into this game than meets the eye and it offers a very fun and enjoyable gameplay experience.

Food – a valuable resource in Countermay.

All of that being said, the game isn’t without its faults. Players of L5R will find this game playing just a bit too close to something they already know. Also, if you haven’t seen The Gamers: Hands of Fate, most of the game just plain won’t make sense. I feel like AEG rushed a bit to put this game out to cater to the film’s fans, and a little more time could have gone into it.

The rulebook is quite convoluted, and it took me many passes to get everything straight. I think it would be very beneficial for players to have a rules errata and FAQ handy to clean up some things. Also, though the game is marketed as a 2-5-player game, I really feel it was meant to be a 2-player title. Above 2 players the game gets really whacky and becomes a lot less fun, mainly because there is less player interaction due to the lack of cards that can affect players outside of battle.

Ultimately, R9E is a colorful and interesting game that is fun to play. The more time you spend with it the more engrossed you become. I definitely feel that it’s one of those “learn as you play” games, which isn’t necessarily a bad thing. I do think AEG could have spent a bit more time on the game, cleaning up rules and offering a bit more in terms of card pool, but that doesn’t mean the game isn’t fun.