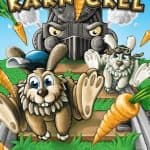 You are reading
Written Review – Karnickel

At the end of the day, all a rabbit wants to do is munch on some yummy carrots in peace. However, when your foraging grounds are near a train track, you may miss out on an opportunity for prime eating! In a game of chance you will move your, and your opponents’, rabbits around the train tracks and try to land on a space with carrots without being scared away! Aimed towards players ages 6 and up, this push-your-luck game brings laughs and chance to the table.

Karnickel comes to us from Lookout Games, and was published by Mayfair Games in 2013.

When you open Karnickel, inside you will find the following :

When you open up the box, one of the first things you’ll need to do is put the stickers on the faces of the dice. In our photo of the contents, you’ll see that we’ve already placed the stickers and haven’t included the sticker sheet. 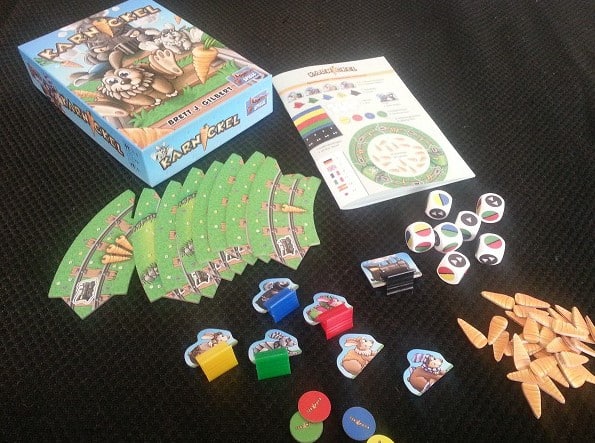 The artwork by Klemens Franz is whimsical and colorful, giving it appeal to families with younger children.

For your first game, the rulebook provides a picture of how the tiles should be laid out, leaving the placement up to you after the first game. Each player takes a rabbit, the disk matching that rabbit’s base color, and one carrot. The rest of the carrots are placed in the center of the tracks. Place the Train marker on the the train space with a double outline, then place the rabbits on any space on the track. Rabbits may be on the same space as other rabbits, as well as the same space as the Train.

(In a two player game, each player takes 2 rabbits : one player takes red and blue, and the other takes yellow and green.)

To begin, the youngest player takes all 7 seven dice and rolls them. Any dice rolled with the “train engine” face (either one or two white arrows on a black sticker) are placed in the center of the tile circle. The rest of the faces will show a combination of two colors. A player may choose to  move one rabbit of a corresponding color on the dice. When moving rabbits, you must move the rabbit its full movement shown on the dice. If a total of 4 red faces have been rolled and a player decides to move the red rabbit, they must be moved the full 4 spaces. (In a 3 player game, one rabbit will not be on the board, so ignore colors rolled for the missing rabbit.) Once a rabbit has moved, pass the dice to the next player, leaving those with the train engine faces in the center of the board. This means that if the first player rolled 2 train engines, the second player will only roll the remaining 5, and so on. 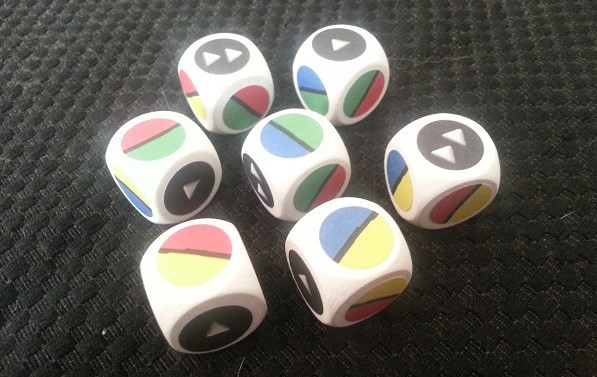 When a player rolls the dice and it lands on no rabbits, the train is ready to move. That player picks up all 7 dice and rolls them. The number of arrows that appear on the rolled dice is the number of spaces that the train then moves. If the train moves through a tile with a rabbit, that rabbit is scared away and returned to its owner. If a rabbit starts on a tile with the train, they are safe. There are two spaces on the board which indicate the rabbit is on top of a tunnel, and they are not scared away. When the train is done moving, any rabbits remaining on the board collect carrots according to the number of carrots displayed on the tile they are on.

Players with rabbits on the board may collect 1, 2, or 3 carrots from the tiles on the ground. One tunnel space grants 1 carrot, and the other has an exploding carrot. This means that the rabbit is safe, but that rabbit’s controller loses one carrot. 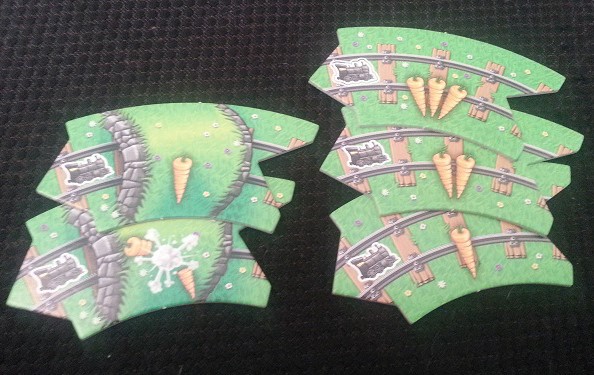 If all rabbits are scared away in a turn, the player that rolled the dice to move the train collects 1 carrot from each player if they have one. This ends the turn. Rabbits still on the board stay where they are, all other rabbits are returned to the board and the game continues, starting with the next player rolling all 7 dice.

The win condition for the game is to reach 8 carrots before any other player! In a two player game, the winner is the first person to reach 12 carrots. In case of a tie, continue play until there is a clear winner!

A Good Time For Everybunny

I’m gonna start off with some honesty, and say that I expected this game to be somewhat gruesome. Age range aside, when you see a game cover with running rabbits and an determined train chasing close after them, one assumes the worst. I was torn between being relieved and disappointed when the rabbits were “scared away” when the train engine entered their tile, but being a parent made me laugh and appreciate this tamed approach.

Karnickel was easy to set up and learn, and we sat down for many games the first night that we opened it. The most difficult thing about the game is counting up how many spaces each rabbit can move, and strategically moving them, but I’d say that only for younger kids. However, I think this can teach kids to think ahead. Since it is a push-your-luck game, it still has a great deal of chance thrown in, but can certainly set the groundwork for future strategy building.

When we played, there was plenty of messing with the other players and then just trying to move as quickly as possible when they’d put your rabbits on compromising tiles. It is light-hearted and fun, and with a short play time, can be taught to anyone quickly, and many games played in a short period of time. Our longest game lasted 20 minutes, only because we ended up passing and rolling one die between two of us for many many turns until we triggered the train to move!

Overall, I think that Karnickel would be a great library addition for any family with younger kids looking to get into gaming. Is it worth picking up for a household without kids, or kids visiting frequently? That would really vary on the buyer and what kind of games they’re looking for. If you’re looking for a game that is fun, easy to learn, and quick to play, Karnickel might just be up your alley! Karnickel retails for $20.00, so take a risk and try to collect the best carrots on the tracks!

Facebook Twitter Google+ LinkedIn Pinterest Tumblr
Previous article The Elves of Mirkwood – More Releases for The Hobbit: The Desolation of Smaug
Next article Written Review – Romance of the Nine Empires
Board Games