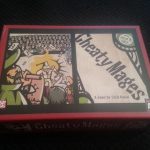 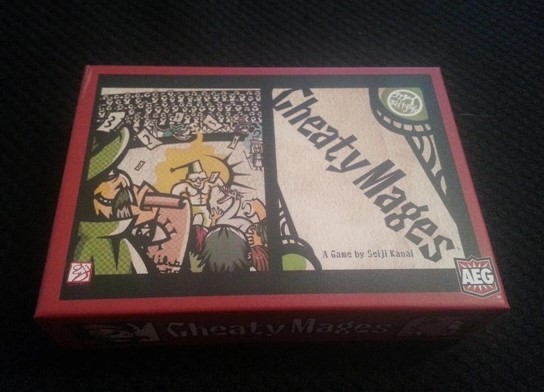 In a world of fantasy and magic, mages who have been trained in the art of tricks and spells need to find a way to entertain themselves just like any other. When you’ve graduated from mage school and become a grand wizard, what are you to do? How about you go down to the arena and try and make some coin? By betting on fighters in the arena and using your magic spells to help “aid” the battle, you could come out on top with some serious moolah. The stakes are high, however, as you’re not the only wizard with spells to sling! You’ll take on others in this magical arena and have to place your bets with some strategy in order to come out the winner with the most coin in the end. Judges will watch over each mach, some disallowing certain spells. When a judge makes a ruling on a fighter who has broken their rules, they could get all of their spells removed or even worse – become ejected from the match all together! Keep your spellbook handy because you’ll need it to walk away with your riches.

Inside this small, yet magical box you will find:

The cards are broken down into four different types: Fighters, Judges, Spells, and Betting cards. Each type has its own special color, so you can easily separate them from the others. The coin chips are your usual chit-board punch-outs, though they’re still sturdy. They also come in denominations of 1, 5, and 10. The rulebook is somewhat small, but it lays out the rules in an easy-to-follow manner. 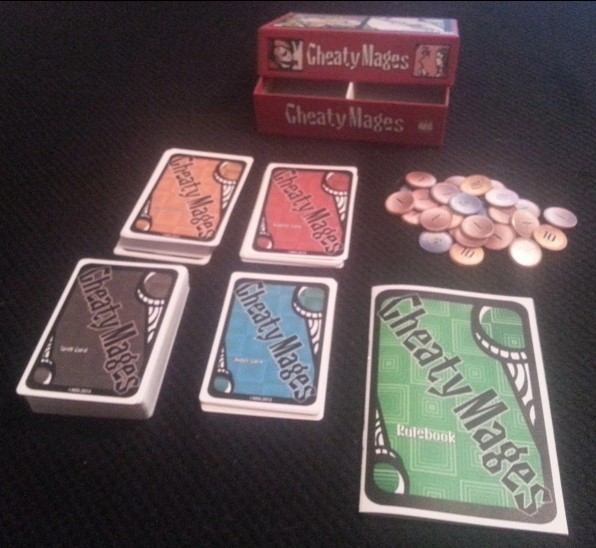 Setup and How to Start Slinging Spells

When setting up for a game of Cheaty Mages, each player needs a set of Betting cards. These cards are numbered from 1-5, and correspond to the Fighters we’ll be seeing later in the game. Next, shuffle the Fighters, Spells, and Judges separately, and place their decks in the middle of the play area. These will be the draw piles for each of the respective types of cards for the game. Afterwards, Spell cards are dealt out depending on the number of players:

Finally, place the coin chips in easy reach of all the players, giving each player 2 coins to start off with. Now you’re ready to start a game. 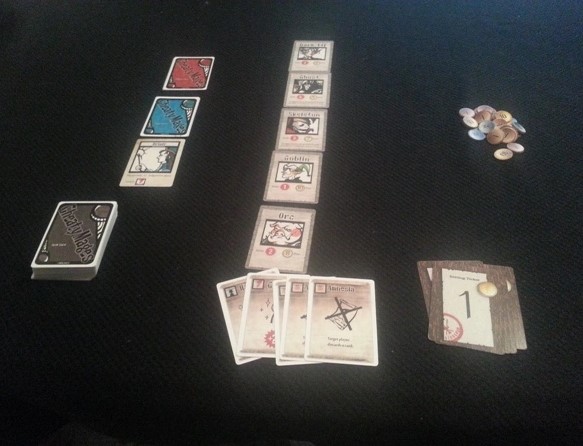 Here we see the standard setup once the Fighters have been selected, along with the Judge.

An example of a Fighter card.

2. Select the Fighters – Draw five Fighter cards from the top of the Fighter deck, placing them in a vertical column in the middle of the play area. These Fighters are numbered from 1-5 in descending order going down the column, 1 being the top card and 5 being the bottom.

An example of a Judge card. Each Judge has a Mana Limit and Judgment ruling.

3. Select the Judge – Flip over the top card of the Judge deck. This will be the Judge for the current round.

4. Place Bets – Players place bets on the Fighters for the round. Using their Betting cards, players can either place a single, double, or triple bet. The rules for the bets are as follows:

You don’t pay to place bets in this game. Once all players have placed their bets in secret, you proceed to the next phase.

An example of some spells. Most have a mana cost, effect, and spell type.

5. Play Spells – This is where the bread and butter of the game come into play. During this phase players get a chance to play spells on Fighters, one spell at a time, starting with the Start Player. The player chooses one spell from his or her hand and plays it. The way the spell acts depends on the spell type, of which there are three:

Some spells have the keyword Enduring. This is usually followed by a target (such as Enduring/Fighter). These Support spells are not discarded when they are used, rather they stay in play with a constant effect. Finally, you may come across a Forbidden spell. There aren’t any special rules for these spells, though some Judges disallow them from being played.

Players have played their spells, and each has passed. Now it is time for judgment!

6. Judgment – The Judgment phase is the one in which the Judges do their work. Judge cards will have some important information on them that will determine what happens during this phase. First you’ll see a Mana Limit, which is a limit on the total mana of spells played on any one Fighter. Each spell has a mana cost in its upper-right corner. Players don’t have to pay to play these spells, but their mana cost counts toward the Mana Limit allowed on each fighter.

For example: if a Judge’s Mana Limit is 10, no more than 10 mana worth of spells can be played on any one Fighter. The next thing you’ll notice is their Judgment. This usually is either Dispel or Eject. If a Fighter has broken the Mana Limit rule, the Judge declares judgment on them. When the judgment is Dispel, all spells on the Fighter are discarded. If the judgment is Eject, the Fighter and all of their spells are removed from the match. Some Judges have special effects, and these effects will be listed on their cards. After judgment has been passed, the next phase begins. 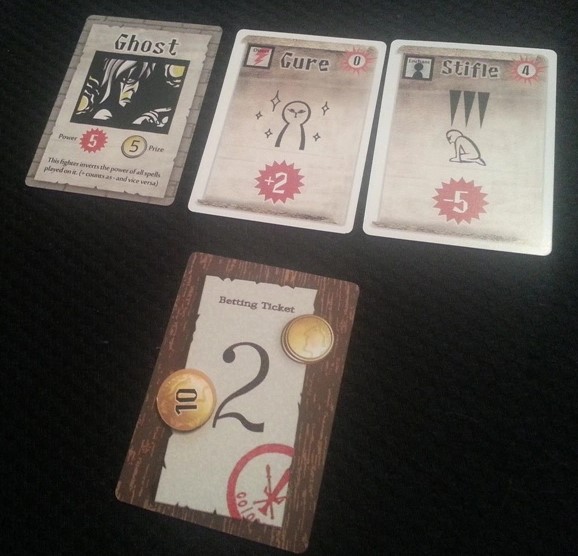 In the last example, the Ghost is the winner of the match, as it had the most power after all spells and judgment were accounted for. If you placed a single bet on the Ghost, you win 10 moneys!

7. Declare the Winner – When judgment has been passed on all of the Fighters, they are compared. Each Fighter has two important numbers printed on their card: their payout value on the left and power on the right. Taking into account all of the spells played on each Fighter (since most spells either raise or lower a Fighter’s power), the Fighter with the highest power wins the match. All players then turn their Betting cards face up and collect any winnings they’ve earned.

8. Draw Cards – Players refill their hands by drawing a certain number of cards based on how many are playing:

9. End of the Round – After players refill their hands, all of the Fighters are shuffled back into the Fighter deck. All spells played on Fighters are discarded, and all of the players’ Betting cards are returned to them. Then a new round will begin with the Start Player, who is now determined by who has the most money, or you could always just go clockwise around the table.

The game ends after three rounds, and whoever has the most money is declared the winner!

Has the Bet Been Successful?

Cheaty Mages is yet another light card game that AEG has done well with. The game doesn’t take long to explain and set up, which makes it perfect for teaching new players. If you’ve got a group that isn’t into gaming, or if you’re trying to expand your gaming library, Cheaty Mages will get the job done with some fun. The cards are sturdy and unlike those of other small card games, and they fit the bill as the type of quality you’d expect from AEG.

With five players this game gets really fun. You really have to think on where to place your bets as spells will certainly be everywhere. There’s plenty of strategy involved, especially when it comes to your hand. Playing out all of your spells may help during one round, but it will leave you hurting with less cards in the next. The game can get very cut-throat very fast, but as soon as things got deadly we were laughing hysterically and having lots of fun.

Some of the Fighters have reverse effects, which see positive cards played on them acting as negative and vice-versa. This changes things up quickly and dramatically, as your entire hand could be useless depending on the Fighters chosen. Some Judges could retain your hand as useless as well with the spell types they disallow, which can cause some issues. The only real problem is that when you head into the third round, there very well could be a player with a huge lead. Still, this is a light game and is meant to be played many times in the time it takes to play a larger game so I’ve found it works out.

Cheaty Mages is a light-hearted, fun, and interesting game that’s a lot more tactical than you may initially think. The replayability is high, and you can play the game with just about anyone. I’d suggest this as a great family game, and it could also be busted out at parties. The wide variety of spells always keeps the game changing, and you won’t ever have a game go the same way twice. Gamers will find this game fun, and it will make a great filler that will be hard to put down.