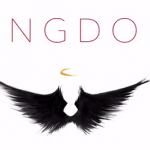 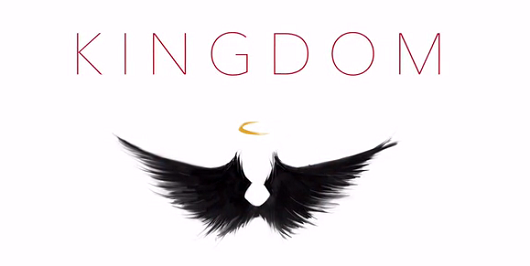 The battle between the Arch Angels and Fallen Angels is relentless and intense. A project on Kickstarter called Kingdom brings that battle to your gaming table in a game of strategy and supernatural conflict for 2 players. Black Locust Games created a Print-and-Play version for those wanting a sneak peek into the game, or to give those that are undecided  a chance to test out the mechanics. October seems so far away to get my hands on the final copy, so we took the opportunity to print the sample game out and put it to the test!

We laminated our printed game for durability and ease in shuffling.

We also downloaded the rulebook made available through the Kingdom Kickstarter project page. Check out the “What You Get” section for a full list of what the completed game will include.

UPDATE: During funding, this game had a name change – Kingdom is now REGNUM ANGELICA

How To Play – Overview

The object of the game is to score Angels by infiltrating the realm of your opponent. The game ends when a player cannot draw when they need to, or a player reaches 35 points. Since the deck number is reduced in the print-and-play, the end condition would most likely be the inability to draw a card.

First things first, we are going to go over some basics of the game. There are 5 rows you must move through in order to cross the board. Entering an enemy’s realm means that you must move past any obstacles in their first row and end in the fiery pits of the Fallen Angels, or among the clouds of the Arch Angels. The counter on the left of your setup is your score tracker, and the counter on the right is your Power meter. The “Draw” and “Void” locations are self-explanatory.

Now, let’s look at card types. First up are the Angel cards. At the top of the card you’ll see the Angel’s name and who that Angel is. At the upper left corner will be a golden symbol with a number inside – this is the rank of this Angel, and how many points are scored if they successfully infiltrate your opponent’s realm. The number in the circle below that is movement – your Angel may not move more spaces than the number indicated here, unless another card is played to override this. Under the picture of the Angel is an ability that sets off once the Angel is activated, or when certain things happen in the game. Below that is the combat compass. The direction in which an Angel is attacking or defending from will determine what element they will employ during combat.

Next up are the Angelic Script cards. These cards will have their own symbol for the photograph, and a number at the bottom of the art’s frame. This number is how much Power it will cost to play this card for its text, or how much Power you will gain if you decide to burn the script.

Lastly are the Pillar cards. These cards can be played on Angels by paying 1 power to add defense to the Angel. An Angel may only have one Pillar at a time. These cards add 1 to the rank of the Angel it is attached to when it scores, but you may also burn Pillars for Power as you would with angelic scripts. Having a Pillar on an Angel means that the element on the Pillar is what is used for defense in combat.

Each player shuffles their deck of Angels, Angelic Scripts, and Pillars, and then draws 7 cards. Being the dark side, the Fallen Angels will always begin conflict, and that player takes their turn first.

Players may place Angels face down in their first row on the first turn. Players have the option to “burn” an Angelic Script by sending it to the Void and gaining Power equal to the card’s cost. At the end of a turn, players draw back up to a minimum hand size of 4, or just draw one if their hand is 4 or greater. On future turns, players may activate a face-down Angel. To do this, at the start of your turn, you will gain X movement tokens, X being your Power total at the start of your turn. When you activate an Angel (turning them face-up), you must move them at least one space, which can be in any direction, including diagonally. You must pay 1 movement token per space your Angels move.

Leaders of the Arch Angels and the Fallen Angels

When an Angel crosses the center row (Earth), they may gain a benefit, depending on where they land on the row. These benefits are to gain 1 Power, 2 Power, or to draw a card. Each Angel may only gain one benefit while on the field, so you cannot land on the space to gain 2 power, and then move across the board to gain the others.

If you move into a space where an opposing Angel is located, combat is initiated. In combat, match up the symbols on the attacking Angel’s compass to the corresponding symbol on the Angel defending according to the direction the attacking Angel is coming from. Using the list above the photo of the Angel card, determine the winner. If the symbols match, the Angel with the highest rank wins.

Throughout the game, Angelic Scripts can be used on your turn to further press your angelic forces, or can be used at times at instant speed to negate an opponent’s shenanigans.

So, What Do We Think?

The artwork has been a major draw for a lot of people, as it is gorgeous and detailed. I am in love with the filigree score tracker for the Arch Angels, as well as the gnarled roots on the score tracker of the Fallen. The Arch Angels’ realm is as one would imagine it to be, in the sky with clouds and light. Across the board is the layers between the two, Earth. The Fallen Angels’ realm is a fiery red pit below the Earth’s surface. The visual presentation of the board was excellently thought out, in my opinion. The Angels themselves are beautiful. Everything about this game is appealing to the eyes.

But that’s not enough. What about the game play? Kingdom required some thinking ahead in regards to the timing of when you place certain Angels, when you activate others, and when to play Angelic Scripts. Managing all of these factors as well as your Power makes for a game that is not only challenging and strategic, but fun and very re-playable. We greatly enjoyed the first play through, and before we knew it, we had many games under our belts. Since it is the lite version of the Print-and-Play, our games lasted between 20-30 minutes each, but I can see that time decreasing the more we play.

I think that Kingdom has a lot of potential, and I tell everyone I encounter that likes games to check it out. With talk of expansions and adding more Angels into the game as it nears funding and stretch goals, Kingdom could really take off to the heavens; or the pits below, whatever side you’re rooting for.

Raine’s Two Cents on Kingdom : I want to play more! Its a fun game, it plays quickly. Definitely worth the time invested in play time. The artwork is phenomenal. The ability for “shenanigan-ry” is insanely fun, and there’s a nice element of strategy in it.

So, to answer the question at the top of this part of the preview, what do I think? I think that I can’t wait for the final version of Kingdom to arrive at the office!

If Kingdom is something you are interested in, head over the Kickstarter page and download the rules and the lite version of the Print-and-Play, and put it on your table and see for yourself the fun that Kingdom will bring to the gaming community. For more in-depth discussion on card types, watch the videos made by the creators on the project page!