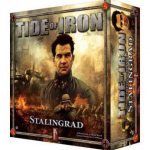 You are reading
Video Review – Tide of Iron: Stalingrad

About a month ago 1A Games had a successful Kickstarter that funded the Tide of Iron Next Wave Edition (revised base game) and Stalingrad expansion. We covered the launch of their Kickstarter campaign.