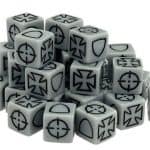 You are reading
Dust Tactics Changes Up Dice and Play Mats 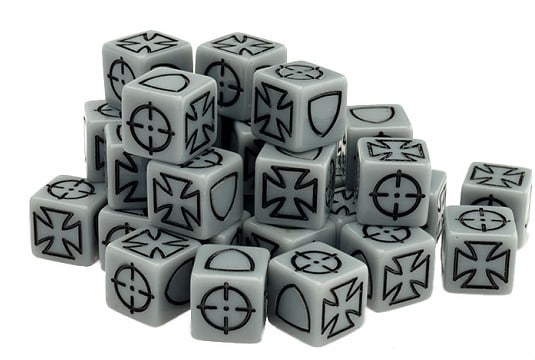 Recently, the folks at Battlefront Miniatures have released some information on updates to their Dust dice, as well as updated Play Mats for your battles. The updated dice will be seen in new starter sets, and while they have new faces instead of the former blanks, they work the same as the old dice. The rule book that comes with the new starter sets will explain how the old dice still fit into the game!

The new dice now carry a faction symbol, target symbol, and a shield symbol. The target symbols now add to your attack rolls, and shield adds to your defense rolls.Also in these new sets are the new Play Mats. These come double sided, one side bearing a city feel, and the other side bears an open field. For those players that are wanting more of an inner-city battle for their Dust games, these will work well, providing buildings without having to carry large terrain.

Something to note as well is that the size of the dice has changed, which you can see in the image above. The old dice are 16mm, whereas the new dice are 12mm, making rolling a handful of them a little easier. Check out the Dust Tactics webpage for more information on the new starter sets and to see what has changed about this tactical wargame.