You are reading
Written Review – Parade 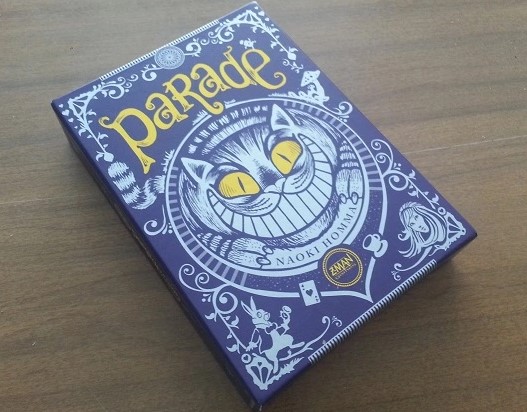 In a world that is already topsy-turvy and chaos is an everyday thing, keeping a parade in order can be an overwhelming task. That is just what you are doing in Parade! Parade was originally designed by Naoki Homma in 2007, but has gotten a makeover in 2013 from Z-MAN Games. As an organizer of the Wonderland Parade, you will make sure that people don’t lose interest by seeing the same kinds of characters while taking the complaints of those who have left because someone else stole their thunder. Do you have what it takes to keep a parade in check?

Parade comes in a small purple box covered in silver illustrations of hearts, teacups, cards, filigree, and Wonderland characters, including the Cheshire Cat’s face, front and center. The cat’s eyes match the yellow of the game’s name, giving it a sophisticated yet whimsical feel.

Once opened, you will find the following :

These sit in a small tray that separates the cards into two piles for storage. The coasters match the style of the front of the box along with a checker pattern in the background. The cards themselves are backed with a style similar to the decorations on the box, purple with silver and yellow drawings. The card faces don classic characters from Wonderland, and are illustrated by Chris Quilliams, who has won awards for previous artwork on board games.

On a player’s turn, they will choose a card and place it at the end of the parade, removes cards from the parade if necessary, and then draws a card from the draw pile. So, let’s talk about what cards are removed from the parade in a turn. If I place a red 3 at the end of a parade of 6 cards, I will count 3 cards in (after the card I just placed), and those 3 cards are “safe”. Then we must look at the last 3 cards at the front of the parade. If any cards in this remaining set are equal to or less than the numerical value of the card you played, or are the same color of the card you played, you must take them and place them in front of you. If the number on the card you play is equal to or larger than the number of cards in the parade line, then nothing happens.

You play a red 3. The red 1, green 10, and black 1 are all safe, and the last 3 cards are eligible to be removed. The blue 0 would leave since it it is less than 3, and the red 9 would leave since it matches the played card’s color. The purple 7 would remain and become the front of the parade.

Each player takes turns this way, avoiding picking up cards when possible, until the draw pile runs out or a player has one of each of the 6 card colors . At this point, the remaining players will take one more turn to score (or not score) cards, without drawing at the end of their turns. When the game returns to the first player that reached 6 colors, scoring begins. Players choose 2 of the remaining 4 cards in their hand to place in front of them, and discard the remaining.

Since everything is backwards in Wonderland, you are hoping to have the least amount of points at the end of the game, so let’s look at how to score. Going around the players, determine who has the majority in each color. Players with majority in specific colors will flip all cards of that color face down, and they now count as 1 point per card. The remaining cards are counted up at their face values and added to the flipped cards. The player with the lowest score is the winner! If the scores are tied, the player with the fewest number of cards in front of them wins. 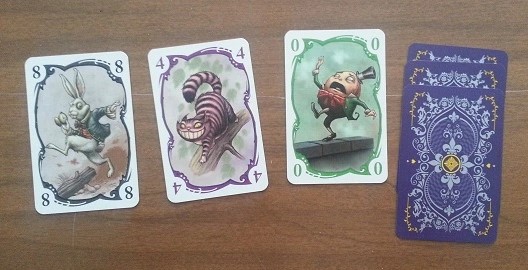 In a two player game, the only rule modification is that in order to get majority in a color, you must have at least 2 more cards than the other player in that color.

I was pleased with Parade and its simplicity. Explaining the rules to the younger crowd may take a couple turns before it sinks in, but once it does, the game goes by quickly, even with a bit of strategic planning. If you have a highly analytical player, their turns could take longer than normal and have the potential to slow the game down a bit, but it has a fast pace otherwise. 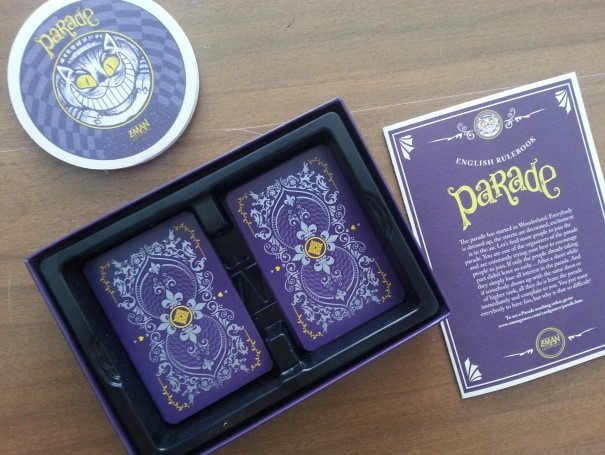 Cards set in the box

My family enjoyed this game, and we played many rounds the first time we put it on the table. Watching the length of the parade grow and avoiding picking up cards for a few turns was always fun, until the parade got lengthy and your only choice is to play a card that would make you pick up nearly half of the parade. I do like the luck-of-the-draw in this game, because it keeps you changing strategy throughout the game. I feel that the “sweet spot” for player numbers is 5, though I did enjoy the 2 player games. You might go for an extra card on purpose to ensure that you turn some high cards face down, all while struggling to have 2 more of that color than your opponent.

I’m a big fan of Alice in Wonderland, but I don’t feel that the theme in Parade is very strong. The idea of the game taking place in Wonderland doesn’t root itself in any part of the game except for the artwork. The art style really appealed to me, and the decorations on the back of the cards were my favorite visual in the game. As a card game, though, I still find Parade very fun, and I would be happy to pull it out as an in-between game on an intense game night, or even use as a party game.

All in all, Parade is a delighful card game and holds its own at a party or game night. Wonderland fans may not find this game a necessary part of their collections as the theme is only an appearance factor, but it might appeal to you enough to sway a purchase. Parade retails for $19.99, which might be a bit steep for those wanting a strong theme, but provides beautiful cards and a well laid-out game. A great gift for a friend or to expand your card game collection, pick up Parade for a topsy-turvy time if it is your cup of tea!