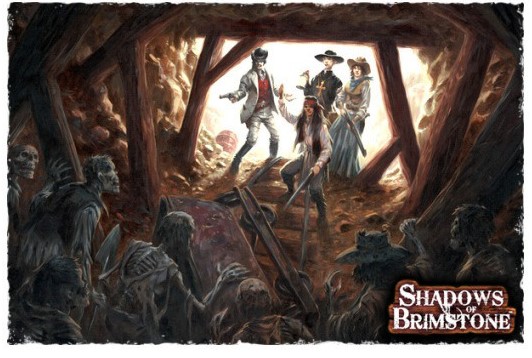 The Shadows of Brimstone Kickstarter campaign put up by Flying Frog Productions has taken off tremendously. Right now the campaign is sitting at just over $913,000, which is well beyond their $30,000 goal. Because of how much attention the project has received, and since it’s on its last week, Flying Frog has posted a preview of their $1 million stretch goal: Beli’al, Scourge of Worlds. 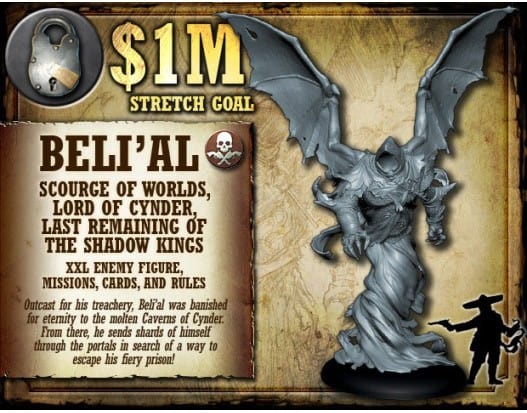 This is one giant enemy that we have been very excited about! And it’s been hard to keep him under wraps until now.

A fallen ancient, Beli’al is the last remaining Shadow King of old. Known by many names across countless cultures, Beli’al is often referred to as the Scourge of Worlds, Emissary of Armageddon, Lord of Cynder… he is virtually a god, and an evil one at that! With massive demon wings, ancient tattered robes, and ornate Dark Stone armor, at his full power, Beli’al would be more than a match for any that would stand against him. Luckily, as part of his imprisonment, he can no longer take physical form. Banished to the Caverns of Cynder as punishment for his treacherous crimes, Beli’al is ever searching for a way out of his fiery prison. To this end he breaks off shards of his eternal hate, manifesting them into powerful avatars of himself and sending them through the portals that open into his realm. These avatars of Beli’al have only a fraction of his full strength, but they are powerful agents of death and destruction and will stop at nothing in their quest to find their Lord a way out. He also calls upon his legions of Hellfire Succubi to do his bidding, both in the Caverns of Cynder and beyond. The number of men these demonic creatures have lured to a fiery end is beyond reckoning, all in the name of collecting souls to feed their master’s growing hunger.

Shadows of Brimstone is a cooperative dungeon-crawl boardgame set in the Old West. There’s a spin here, though, as unspeakable horror gets tossed in the mix, and players will have to fight to survive! Players create their own characters, following the classic Western Hero archetype. Forming a posse, the Heroes will set out and adventure down into the mines to confront creatures and demons from another world. Players will have to work together to survive and purge the evil from the land.

The Shadows of Brimstone Kickstarter campaign only have 5 days left to go. The game looks fantastic, and all of the miniatures follow suit. There’s still time to get in on the project, and there are plenty of options to choose from. With all of the stretch goals being met so far, I don’t see why Beli’al would be hard to achieve. Make sure you get in quick, though, as there isn’t much time left!