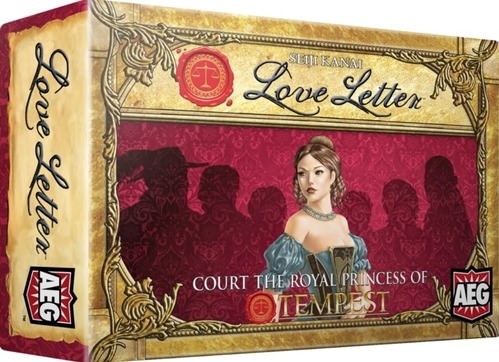 “In vain have I struggled. It will not do. My feelings will not be repressed. You must allow me to tell you how ardently I admire and love you“

If Princess Annette could only hear your words of love, surely she would see that your love is true! In Love Letter – Tempest Edition by Seiji Kanai from Alderac Entertainment Group (AEG) 2-4 players age 8 and up are trying to woo the lovely Princess Annette of the city-state of Tempest. The princess has locked herself in the castle and will receive no visitors. Your only hope is to rely on members of the court to deliver your words of love to the Princess, surely once she reads them she will know that your love was meant to be!

The game also comes with a small velour bag that holds all the components making Love Letter an ideal game to take with you on the go. 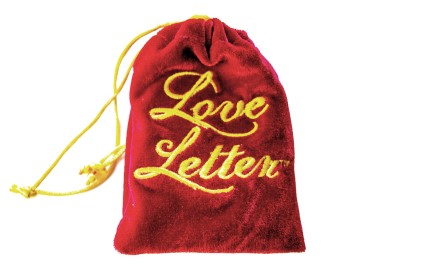 Love Letter is very simple to play. Each player has a reference card indicating how many of each type of card is in the game allowing them to make educated guesses about which cards other players may be holding based on what cards have already been played. At the start of the round each player is dealt one card. Each card has a character, a number value from 1-8 and a short text entry explaining what to do when the card is played. On their turn a player draws a card from the deck. Then they play one of the cards from their hand in front of them executing the text on the card.

The game ends when a player reaches a certain number of tokens (based on the number of players) representing their successful courtship of Princess Annette!

Love Letter is considered a micro-game but it packs a surprising amount of gameplay into just 16 cards. Each turn players are presented with an interesting decision of which card to play and which card to keep. As a round progresses each decision becomes harder as there is more information available to the other players. This helps keep the game tense and interesting. Love Letter also benefits from its short play time. Even when you are out of a round early you will likely only have to wait 3-4 minutes for another round to begin.

Love Letter is very luck-based due to the card draw mechanics and is a short, light game. This dependence on luck and the brevity of the game may not appeal to players looking for something heavier or more strategic. Love Letter functions best as a quick opener or closer to a game night rather than a main game.

Love Letter – Tempest Edition is an excellent example of a game doing what it sets out to do. Like a great romance, it may not be for everyone but it can be enjoyed by anyone. Highly recommended!