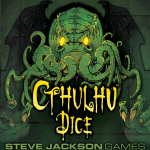 In 2010, Cthulhu and his minions set out to overtake the minds of dice game fans all over the world. The result was Cthulhu Dice, a quick dice game by Steve Jackson Games, the company that brought you Munchkin and Zombie Dice! In Cthulhu Dice, you are trying to steal Sanity from your opponents to keep for yourself, or to drive other players mad (AIIIEEEE!!) for Cthulhu’s cause. Victims get a chance to fight back, and could foil your plans, and its all up to a die roll.

A set of Cthulhu dice includes the following : 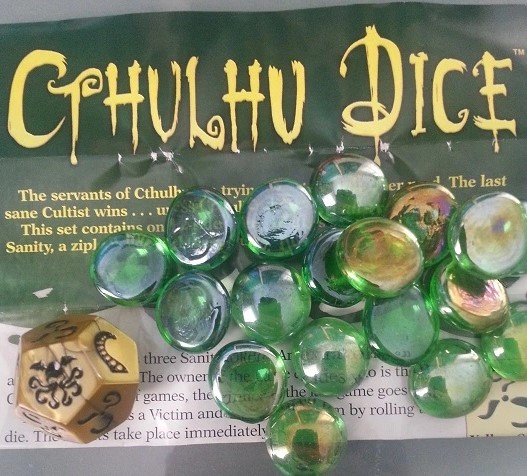 Ziplock bag that came with the set not pictured.

Each player will add 3 Sanity tokens to their lot, and any extras are removed from the game. If there are only two players, it is recommended that each player play as two or three cultists, and just alternate turns.

The center of the table is clear, but this space is “Cthulhu”, and any Sanity lost to him will be placed there. The game owner is supposed to choose the first Caster, who chooses another player to be the Victim, and will try to curse them. 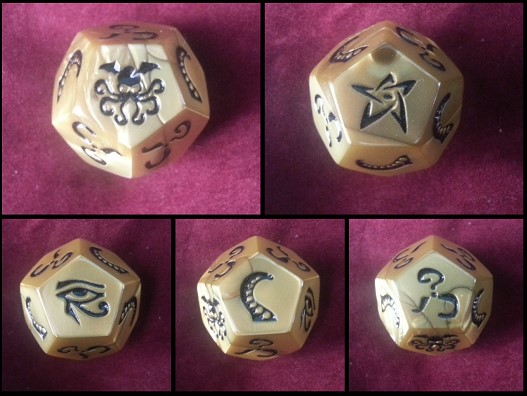 The curses from the d12 are listed below, and the results occur now.

Once these happen, the Victim responds by rolling the die again, targeting the Caster, and the results happen immediately. After this, the dice is handed off to the person to the Caster’s left, and the turn repeats.

If you happen to lose all of your Sanity to the other players and/or Cthulhu, you have gone mad! You can still attack on your turn, but they cannot attack you back. Any time you steal Sanity from another player, it goes immediately to Cthulhu. The only way you can regain Sanity and keep it is to roll the Elder Sign, and get it from Cthulhu himself.

I was still in early stages of learning the mythos surrounding Lovecraft’s Cthulhu, so a small dice game was just up my alley.  It was quick to the table, easy to learn, and I felt that the rules were pretty straight-forward. I personally preferred games with 3+ players, because of the player interaction. I liked that you control more than one “player” in a 2 player game, and it goes quickly as long as you clearly identify which “person” is attacking another.

When I picked up my copy of Cthulhu Dice, there was only one color choice available for the d12 that comes with the game, which is the gold with black ink in the photos above.  However, many other color combinations have been made available since then and can be found at most retailers and online. They’ve even done re-prints of the game that have a metal die!

Really, the only thing I wished had been different about the game was the packaging. While I was grateful for the ziplock bag that it came with to store the tokens and such initially, I felt that it needed something better, even if it were a simple linen drawstring bag. I have since moved it to a felt pouch (and will be making a custom box for it soon). SJG sells special dice bags that can be purchased for the game, though, if you want something fancy.

Cthulhu Dice retails for $6.95, which I think is a fair price, but I would’ve paid an extra buck or two for a better bag to contain the pieces. The game is suitable for kids 10 and up, maybe even a couple years younger with some symbol reference. We bring this along with us for quick demos on days that we play Cthulhu-themed games, and it is generally a big hit. If you like Cthulhu, I’d certainly suggest you look at Cthulhu Dice!