0 comments Share
You are reading
Warmachine – Building a Scenario Board

Next month we’ll be attending a Warmachine/Hordes event taking place at our favorite local game store, Common Room Games. The event is called Day of Recknoning, and you can find details about it here. For the event I decided that I wanted to work on a couple of new boards to play on. The first board, I thought, would be a scenario board, and the second would be a detailed scenic board. After some thinking I decided to work on a King of the Hill board. After about a week and a half, my work is near complete, at least to the point where I can post about it and show you how I built it! So let’s jump right into it.

The materials I used in this board:

I started off by laying out the primary supplies to seal the foam to the plywood. The plywood was relatively inexpensive, and it’s tough enough to hold the board yet light enough to move around when needed. I originally bought the foam in an 8′x4′ sheet (which is how they normally come), and cut it down myself. Of course I used my trusty old cutting knife, so it didn’t come out completely clean, but I got the job done. 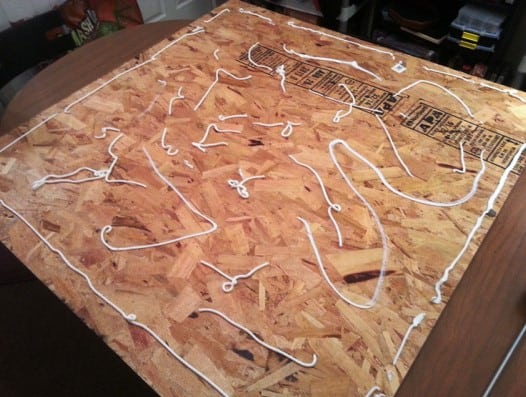 I loaded up the Liquid Nail into the caulk gun and spread plenty on the plywood. I wanted to make sure to get the corners and put enough throughout the middle to help seal the foam in place.

Once I placed the foam on the plywood, I needed to make sure the corners met up. Due to my cutting, the board didn’t match perfectly, but it didn’t leave any gaps, so I call that a win. 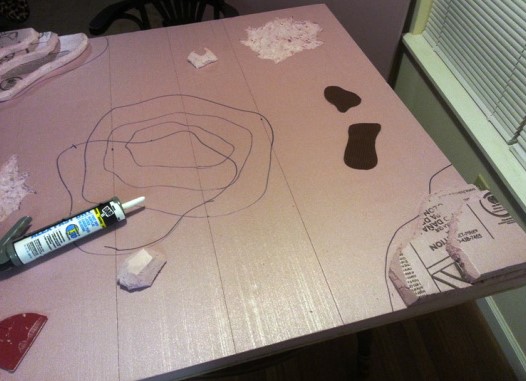 Then it was time for details. I decided that I wanted the board to have a couple of craters, so I used my cutting knife and cut out a general shape after drawing it on the foam with a Sharpie. Then I started pulling away at the foam to give it that broken and rugged look. I took some hot glue and put down some hills that I cut out of extra foam in two of the board’s corners to give it some variation. I also added some Cobblestone Corner Brick Road Felt to the board after I cut out some rough shapes. Finally, I added a couple of mounds to the board to add even more variation. 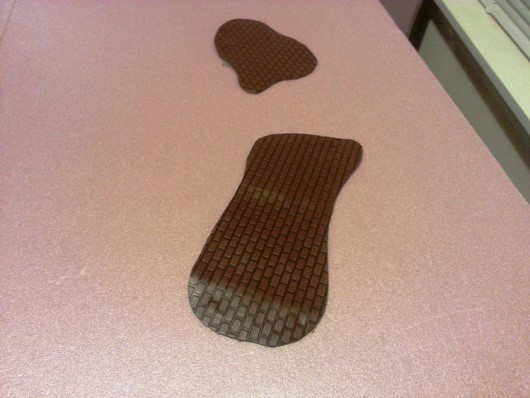 Here is a close-up shot of the road I used. My idea was to get it on the board, then use caulk to smooth out the gaps and make it look like a snow-covered cobblestone road, since I decided I wanted this to be a snow board. This felt came in 15″ strips for a buck, and I picked it up at the local dollar store. If you happen to find it, grab as much as you can. It makes great roads and brick rounds for model bases. 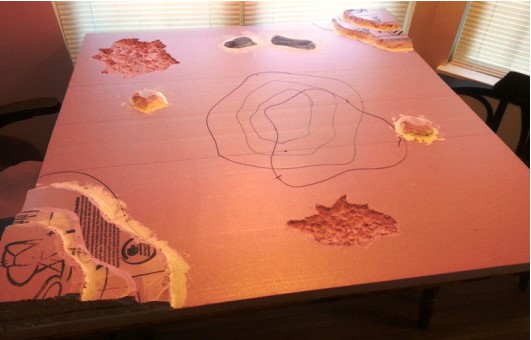 The next step was to start caulking the board. The caulk helps to seal gaps, and it makes the transition for the hills look much more natural. On top of that, when putting a road on your board it helps make the road look like it is more natural, breaking up from the earth. Altogether I think I went through two tubes of caulk for all the work I did, which wasn’t bad. 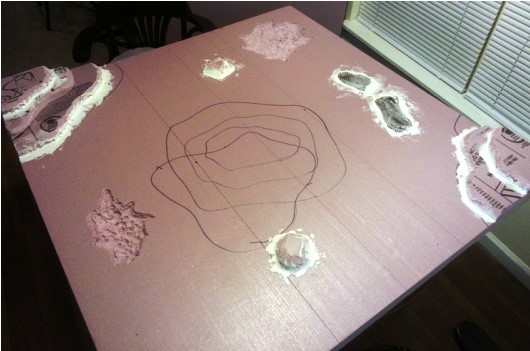 Here’s another shot of the caulking process, this time nearly complete. I had to put on a couple of coats to make it thick enough to stand on the board.

A close-up of one of the mounds caulked. The transition is much more smooth, making it look more natural. 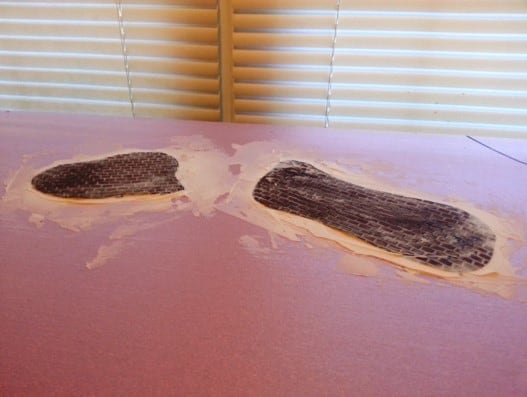 Here’s a shot of the road all caulked. Once I add some texture to the board it will look like snow drift is covering the brick, giving it a cool effect.

The next step I took was to completely cover the board, save for the road and craters, with sand. I spaced it and didn’t take any photos of this stage because it happened so quick. I mixed up some Elmer’s white glue with water and spread it on the board in sections. Then I took some Quick Crete Play Sand and spread it about the glued area. I continued this until the whole board was covered. I let the board dry for about 2-2 1/2 hours just to make sure everything was set in, though normally you’d want to let it dry overnight. Afterwards I dumped the sand off and it became time to paint! Painting was really simple, because since this was to be a snow board I only used white acrylic paint to cover the entire board. It took a couple of coats, but I got it done in a couple night’s work. Afterwards I used a stone drybrushing technique on the craters and sides of the hills to make them look like stone. Finally came some details, and the board is mostly complete!

I added some bushes to the mounds and on the sides of the hills to add some detail. Afterwards I placed some Winter Tufts on the hills for a little more variation. After a lot of sweat and fatigue, the board is ready to play on! 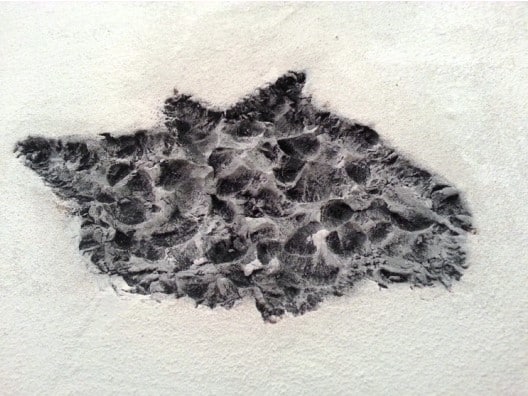 A close-up of my crater stonework. I think it looks pretty neat! 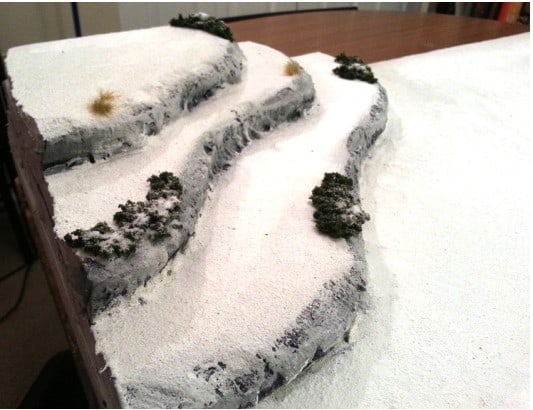 Here’s a shot of the one of the hills, complete with the foliage detail. I even sprinked some snow on the bushes to make them blend in better! 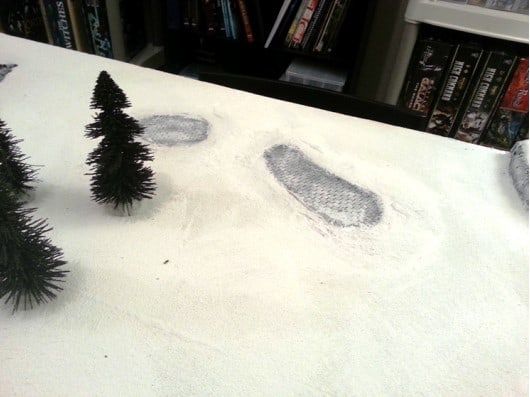 Finally, here’s a shot of the road. I need to go back and re-paint it, as I got too much white on it while trying to add a second coat to the board. It won’t take too much time, and I think the road will pop more. I added some Cobblestone Corner trees to the board, letting them stand free, and they look perfect.

There’s still a little bit left to do for the board. Since it is a scenario board, I am making a large modular hill that will go in the middle for King of the Hill games. I decided to make it modular so players can use the board for normal matches if they desire. I’ll be donating this board to the Common Room, so that more players can enjoy it. I also need to paint the sides of the board to seal it in, and after that it will be 100% done. I was weary making this at first, but now I am much happier with it. My next board is going to be crazy, so I’ve got to get to work on it!