You are reading
Written Review – The Witches

In the magical land of Lancre, there are a lot of tasks to be done. Witches aren’t seen in this world as they are in ours, and are actually called upon in times of need. Throughout the land of Lancre there are a lot of problems that need to be solved, and as a trainee witch there’s no better way to learn your skills and improve your craft. Whether you’re aiding sick pigs, helping with a pregnancy, or even dealing with death, your skills as a witch are very valuable indeed. Can you help solve all the problems before too many crises break out? Let’s take a look and see what must be done!

The Witches is the second game in a series following the setting of Discworld, as written by Terry Pratchett. As you explore the land of Lancre, some of Pratchett’s most beloved characters make an appearance, such as Nanno Ogg, Granny Weatherwax, and even Magrat Garlick. Players do not need to own the first game in the series, Discworld: Ankh-Morpork, to play The Witches.

Included in the box of The Witches are:

The cards included in the game are a bit frail, so bending them is easy. The other tokens are made from sturdy chit board, and the box includes baggies to place all of your components in.  The art style for the game makes it really inviting and lively, which makes sense as the game is marketed as somewhat of a family game. 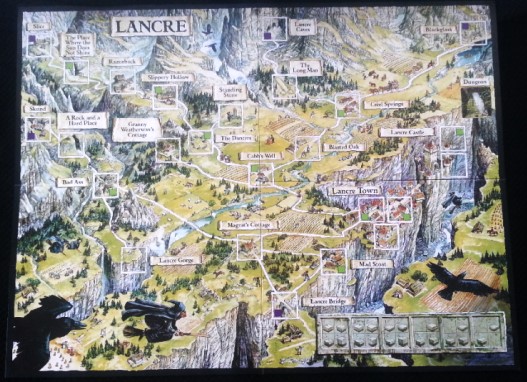 My favorite component in the game, the board!

The player board, or Trainee Witch display.

Once that is done, players choose the apprentice witch they are going to play. Each player rolls all four Witch dice and adds the result. The player with the highest total gets to choose first their witch. Each of the witches comes with a special ability, as outlined here:

Lastly, shuffle all of the cards and deal three facedown to each player. Put the remaining cards near the board to be the draw pile. One player should volunteer to take control of the cards, just to make sure one gets drawn each turn for both player and Problem tile reasons. If no player has taken Dimity Hubbub, then the player who selected his or her witch last becomes the first player, and you’re ready to start the game!

The goal of The Witches is to have the most points when the game ends. The game ends when either all of the Problem tiles have been placed, when a Crisis counter needs to be placed on the board and there are no more left in the reserve, or when there are three Elven tiles face-up on the board at once. Players earn points by solving problems, which we will cover in a bit.

Gameplay progresses through player turns, which consist of different phases. The different parts of a turn are as follows:

Here you see a Problem tile with a Crisis counter.

The player who has volunteered to control the cards draws a card to see which location the next Problem tile gets placed in. At the bottom of each card a location is named. When a card is revealed to place a tile, take the top tile from the left-most stack of tiles in the Problem boxes on the bottom of the board and place it in the location specified. If there is already a Problem tile in that location, place a Crisis counter on the Problem tile. A location may only have one Crisis counter at a time, unless specified otherwise. Then draw another card for the placement of the original tile, and repeat the process as necessary until a tile is placed on the board.

Now you can move your witch about the board. Each witch can move one of two ways: either by using a road connected to locations, or by spending a card with a broom symbol. When using moving the road, a witch can move up to two spaces. You cannot move through a location containing a Problem or another witch. If you encounter a Problem you must immediately attempt to solve it, and if you encounter a witch you must stop to have tea. If you choose to move by broomstick, you simply move your witch to any location on the board.

Cards, and the Witch dice.

When attempting to solve a Problem, roll two of the Witch Dice. Any Cackle symbols rolled will earn you one Cackle counter per symbol. Cackle counters don’t do much in the beginning, but once the reserve is depleted, you have to take counters from other players. You take counters from the player with the most when you need to take one. If, at any point, you have the most or are tied for most when you need to take one you must take a Black Aliss token. These tokens are worth -1 point each at the end of the game.

Once you’ve rolled the dice you can then decided whether you will continue solving the problem or run away. If you run away you simply move to an adjacent open location that doesn’t contain a Problem tile or witch. If you continue to solve the Problem, however, you will roll the additional two Witch Dice. Before the roll you can decide how many cards you will play to add to your roll. Each card with a Headology symbol on it adds 1 to the die roll. (The Headology symbol is the glasses with the nose and moustache.) For each Magic symbol you use it adds 2 to your die roll, and forces you to take a Cackle counter. (The Magic symbol is two stars, really hard to miss.)

You add up all of your dice, and the bonuses from any cards you’ve played. If the number is higher than or equal to the target number on the Problem tile, you succeed. You can take the tile from the board and place it on your Trainee Witch display card. Each of the two different Problem tiles has its own row on the card, and by acquiring Problem tiles you’ll be able to increase your hand size and add bonuses to your die rolls.

If you fail to solve a Problem, however, there are consequences. You must retreat from the location and take a Cackle counter. Some of the Hard Problems have even greater consequences, and are labeled in the rulebook.

A closer look at the cards.

Before we wrap up this section, let’s take a look at the cards. Cards in this game offer benefits that can be played at any time during your turn. Some of the benefits allow you to gain boons, add to die rolls, and draw more cards. What’s more is that some of the cards contain an ability called Power of Three. When you play three different character cards with the Power of Three ability on them, you immediately solve a problem at your location.

To end your turn, you draw cards until your hand is back up to its limit. Your hand size increases as you acquire Problem tiles. For every two Easy Problem tiles you have on your Trainee display, your hand size is increased by one card. When the draw pile runs out, shuffle the discard pile and make a new one.

Eventually the game will come to an end by fulfilling one of the conditions mentioned above. As long as the game does not end by Crisis counters or Elven tiles, players will then score points. When scoring, players earn an amount of points equal to the number on the bottom left of their Problem tiles. Each tile’s score is added together to get a grand total. The player with the highest score is the winner, taking into account all Black Aliss tiles acquired throughout the game.

I wouldn’t consider The Witches to be a heavy game at all, but I would definitely classify it as fun. It’s a game that’s easy to set up, and quick to play. It does only support up to four players, but it can also be played solo by using rules included at the back of the rulebook. The witches is exactly what it’s marketed as: a family-friendly fun game.

The game is stunningly beautiful. The artwork is vivid, bright, and catching. I found myself perusing the game board over and over, just to see what could be found on it. Each of the characters is presented in a lively fashion, and Pratchett fans will be happy to see the face put to these beloved personalities. The presentation does a really neat job of transporting you to the land of Lancre, and it’s hard to leave it.

It’s important to keep in mind that The Witches is a light game, but that doesn’t take away from its fun factor. Of course the major mechanic in the game is left up to the dice roll, but it’s still quite enjoyable. I wouldn’t mark this game up as something you’d have a lot of fun playing with your regular weekly gaming group, but for smaller situations and times when you need a quick, light game this could come in handy. If you can appreciate what the game is marketed as, and the world Terry Pratchett created, I think you’ll get along with the game just fine.